It is my honor to host this guest post from friend and blogger Aurora from the prestigious Once Upon a Screen… always known for her thorough, thoughtful, and witty reviews of diverse selections of classic film, television, and radio. For this month of Halloween Aurora shares with us a piece about one of my favorite figures of classic horror!

CREATURE FROM THE BLACK LAGOON (1954)

Three score and five years ago the Gill-man stepped out from the murky waters of the Black Lagoon located in the Amazon’s Northern region. Defending his territory against human intrusion, the Gill-man, named Creature on marquis across the country, became legend spawning two subsequent feature movies and numerous appearances in media. The Creature, with tall sleek, humanoid frame, was Universal’s classic horror swan song, and he presented a fabled studio a lasting monster with unique elegance.

The adventure in Jack Arnold’s Creature from the Black Lagoon begins as geologist Dr. Carl Maia (Antonio Moreno) discovers a fossilized webbed hand in the Amazon. Realizing the find is an important one, Maia leaves two locals to watch over the camp as he asks for support from the team at the marine biology institute in Brazil. The team is made up of Maia’s colleagues all of whom possess an impressive knowledge of the Devonian Period, which is commonly referred to as the age of fishes and occurred approximately 400 million years ago. Significant evolutionary changes is believed to have happened during the Devonian Period so it’s no surprise the group quickly decides to accompany Maia into the Amazon.

The group includes ichthyologist David Reed (Richard Carlson), a former student of Dr. Maia’s and an expert in the study of fish as is his colleague and love interest Kay Lawrence (Julie Adams as Julia). The money man is Mark Williams (Richard Denning), David’s boss and the one who green lights funding further study of the area where the hand was found. There’s a Dr. Edwin Thompson whose expertise is unclear, but who immediately recognizes the fossilized hand is that of an amphibian creature who spends a lot of time in the water. Thompson is a peripheral character, but he plays an important role later in our story as he is the only person attacked by Gill-man who survives.

On the small ship Rita, captained by Lucas (Nestor Paiva), the group is drawn to the Black Lagoon about which all sorts of scary stories have been told through the years, including ones about a half-man half-fish creature. Unbeknownst to the group the Creature, who is in fact half-man half-fish, has been watching them closely with eyes on Kay in particular. Once in the Black Lagoon, they are in the Creature’s territory and he’s calling the shots as we see when Mark and David dive for rocks. The Creature doesn’t hurt them, instead he lurks nearby watching the intruders.

Things are different, however, when Kay decides to go for a swim. The Gill-man, fascinated by the woman who likely looks unlike anything he’s ever seen, approaches her from below to create a dance in the water reminiscent of Tarzan and Jane’s decades before. Julie Adams called it a love dance during which you can feel the Creature’s heart. This one though makes one’s hairs stand on end with danger at hand as his fascination compounds. We are out of our depth and this fan cannot help the palpitations that increase in intensity as the swim advances. This is all thanks to James C. Havens who directed the underwater sequences, among the most memorable in the movies.

Gill-man covets Kay and she becomes his sole interest while he defends his territory against the others. Slowly, as we get to know him, our allegiances switch sides in support of the unique creature, as Marilyn Monroe’s does after she and Tom Ewell watch the picture in The Seven Year Itch. “All he wants,” she says, “is to be loved and needed and wanted.” Several messages in Creature from the Black Lagoon support an audience’s support for Gill-man and his environment. He is misunderstood as Marilyn states, because we are not the sole inhabitants of this planet, but somehow we are always intent on causing harm. The embodiment of that idea in the picture is Mark Williams who sees the Gill-man as a ticket to fame and fortune while automatically ascribing to the creature no feeling. Mark’s determination to capture Gill-man against David’s protestations causes Mark’s death and we are not sorry. This scientist’s intent is selfish, against the broader good.

The battle between Gill-man and the group on the Rita intensifies as the creature proves himself a worthy opponent by trapping the interlopers in the Black Lagoon. Efforts to free the boat are fruitless until David manages to render the Gill-man helpless with some kind of gas. By this point, however, the creature has escaped captivity, killed members of Lucas’ crew, severely injured Dr. Thompson, and eventually kills Mark who thought himself a match for Gill-man under water. It’s difficult to understand why anyone would deem himself a worthy opponent of a creature that took two actors to bring to life: Ben Chapman plays the creature on land and Ricou Browning and his impressive swimming skills portray him under water. Legend of horror Glenn Strange was considered for the underwater shots as the Creature, but he couldn’t swim.

As the remaining scientists struggle to free the Rita, Gill-man abducts Kay taking her to his lair resulting in an exciting climax, but which results in his demise. One cannot help but be saddened by the vision of the elegant man-fish sinking into the depths of the Black Lagoon, the end of an ancient creature that reminds us of the importance of our past. We are not alone and we are not better. Why do we always forget the first and think the last? 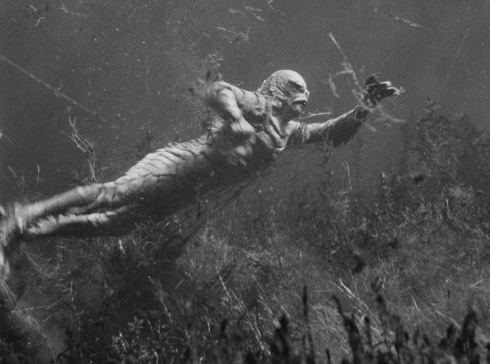 “It makes for solid horror-thrill entertainment,” the Hollywood reporter reviewer wrote of Creature from the Black Lagoon upon its original release. That is certainly true on several levels as the beauty and beast trope is as satisfying here as is the fiction in the science presented with screenplay by Harry Essex and Arthur Ross, from a story by Maurice Simms. As is the case for many others, this fan thinks the Gill-man himself is the main reason to watch even though the story is well-adapted and entertaining. For kids who grew up in the 1950s, as David Skal states in his 2002 documentary Back to the Black Lagoon: A Creature Chronicle, the Creature from the Black Lagoon was the only monster that counted. Previous Universal monster heavyweights like Dracula, the Monster, and the Wolf Man had yet to appear on television, which is how the rest of us fell in love with them.

Audiences across the country first laid eyes on Gill-man on television when Abbott and Costello met him on an episode of The Colgate Comedy Hour. On February 21, 1954 in a parody of their many meetings with Universal monsters, Bud Abbott and Lou Costello are in the Universal props department for the big Creature reveal. As expected, Costello is left alone with monsters appearing only to him when Ben Chapman as the Creature pops out of the chest to end the skit. No doubt audiences were impressed with this new monster, but that cannot compare to the thrills children must have felt when they watched Gill-man in 3-D in the local theaters that offered the new, if short-lived, gimmick along with the unforgettable score and high-pitched screeches every time Gill-man appears.

Bud Westmore, head of Universal’s make-up department took the credit for the creature’s look, but all historians credit actor, special effects designer and animator Milicent Patrick for truly discovering Gill-man’s legendary look. Patrick sketched the Creature and was referred to as “The Beauty Who Lives with Beasts.” Patrick took part in Creature from the Black Lagoon‘s World premiere in Detroit, Michigan on February 12, 1954 where special 3-D screenings were scheduled the following night at midnight. Audiences went crazy for Gill-man and the movie far exceeded studio expectations. On its wide U.S. release that March, Creature was offered in theaters across the country in 3-D and 2-D (flat) versions and it did so well that it remains the only 3-D movie to warrant a 3-D sequel, Revenge of the Creature, which began production in late June 1954. That one was followed by the flat The Creature Walks Among Us in 1956. (3-D Film Archive) It should be noted that as a classic Universal monster, Gill-man has (perhaps) the most interesting character arc in his trilogy of films than any of the other monsters.

From the day he stepped out beyond the Black Lagoon, Gill-man had the weight of four decades of Universal monster legacy on his shoulders and he nurtured that with gilled expertise. The future would honor him with great respect offering him everything from familial bonds as Uncle Gilbert on The Munsters to an Oscar for Guillermo del Toro’s homage in The Shape of Water.

Narrator: In infinite variety, living things appear, and change, and reach the land, leaving a record of their coming, of their struggle to survive, and of their eventual end.

Except the Creature never ends.

@CitizenScreen
Once Upon a Screen (aurorasginjoint.com)