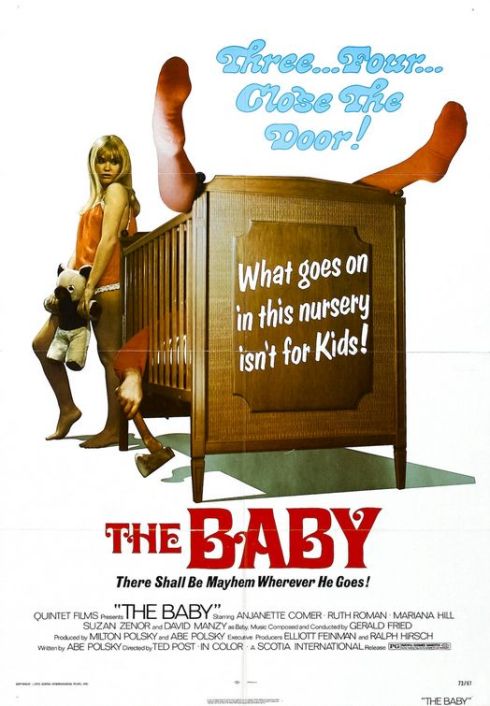 The poster for The Baby alone is disturbing in it’s ability to create an instant queasy feeling and queer flutter that hits your senses due to the inappropriate visual environment. A crib with a large pair of legs hanging over the edge. The hands holding an axe and a sexualized young female holding a teddy bear. So let’s just get these words out of the way for starters…

Touching on so many taboos and cultural deviance is director Ted Post’s shocker The Baby 1973. starring the mighty Ruth Roman.

And I’ve got to mention that Anjanette Comer is an excellent rival to play the ‘outsider’ antagonist against Ruth Roman in this battle of wills.

Directed by Ted Post who gave us Beneath the Planet of the Apes 1970, perhaps my favorite of the ‘ape’ films after the original. Saw each of the series during their theatrical release. Sadly Ted Post passed away just this past August 2013.

He directed television for years beginning in the 50s.  I love the TV movie also starring Beneath the Planet of the Apes blond hunk James Franciscus… who co-starred with the fabulous Lee Grant in Night Slaves (1970) and Dr. Cook’s Garden 1971 with a murderous Bing Crosby. And hey while I”m touting made for TV movies how bout Five Desperate Women 1971 where he most likely met Anjanette Comer. He’s also responsible for several episodes of Rod Serling’s The Twilight Zone (1959-1964), including “Mr. Garrity and the Graves” and “The Fear.”  Post also directed two episodes of the Boris Karloff horror anthology show that you know I truly love, Thriller (1961-1962), The Specialists & Papa Benjamin. And geez Columbo ’75-’76, A Matter of Honor and A Case of Immunity. Most people probably cite him for Clint Eastwood’s Dirty Harry vehicle Magnum Force 1973 or Good Guys Wear Black 1978. Ted Post knows how to put together a thriller!

The Baby’s screenplay was penned by Abe Polsky  (The Rebel Rousers 1970, The Gay Deceivers 1969)According to IMDb trivia, it took almost a year for Polsky to convince Post to direct the film because Post found the topic too ‘dark.’ While in retrospect the film must have ruffled many feathers, and the themes are truly disturbing, there isn’t anything in there that hasn’t been done in a contemporary film in some way, and ideas that force us to think are a good thing. Especially when it’s wearing 70s clothes, and showcasing groovy genre character actors.

The seventies was rife with psycho-sexual theatre that showcased really uncomfortable themes, but somehow managed to create an atmosphere of low-budget art. Consider this, haven’t you seen episodes of Law & Order SVU, Criminal Minds, & CSI where some of the most brutal acts of inhumanity and grotesque forms of torture and abuse are highlighted in graphic detail.  In the 70s it was more nuanced, bathed in muted lighting gels amidst experimental cinematic framing and absolutely moving musical scores.

So on one level refer to the litany of words above and assign your favorite one to The Baby, yet on another level, let’s look at this film and ‘react’ to it and recognize its power.