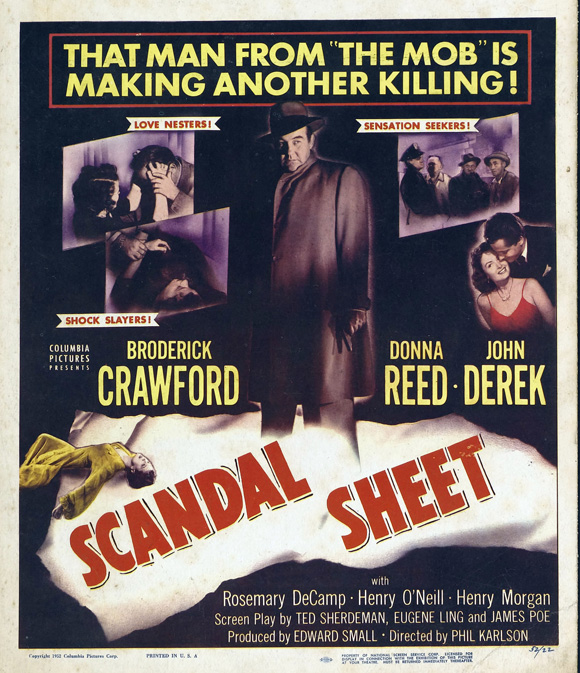 Directed by Phil Karlson with a screenplay by Ted Sherdeman, Eugene Ling and James Poe. Based on the novel by Sam Fuller. With a score by the prolific George Dunning and gritty cinematography by Burnett Guffey (All the Kings Men 1949, From Here to Eternity 1953, Birdman of Alcatraz 1962, Bonnie and Clyde 1967).

Broderick Crawford is the new editor Mark Chapman of a New York newspaper who manages to grow the circulation of the ailing paper. But he sacrifices morality when it comes to increasing the range of his audience. He winds up turning the newspaper into a trashy tabloid rag, “pandering to the passions of the base moron.” John Derek plays top reporter Steve McCleary and Harry Morgan is wonderful as a wise cracking photographer Biddle, both who are chasing down a sensational front page grabber about a lurid murder. At the center is a Lonely Hearts Club dance sponsored by Chapman’s wife (Rosemary DeCamp) whom he deserted years ago. When Charlotte Grant (DeCamp) threatens to cause Chapman trouble in a fit of rage he accidentally kills her. He stages her death to look like she slipped in the bathtub, hitting her head on the faucet. McCleary senses something isn’t right and convinces the cops that it’s a case of murder. In order to avoid getting caught Chapman must plan to kill again to cover his tracks, so he enlists McCleary hoping to divert his attentions away from the truth. The film also co-stars Donna Reed as McCleary’s more traditional colleague, Henry O’Neill, and a cast of great character actors.

Biddle: “You know that wasn’t a bad looking dame. Too bad the guy used an axe on her head. Spoiled some pretty pictures for me.”

Steve McCleary “Very rare items. Pictures of a dame with her mouth shut.” 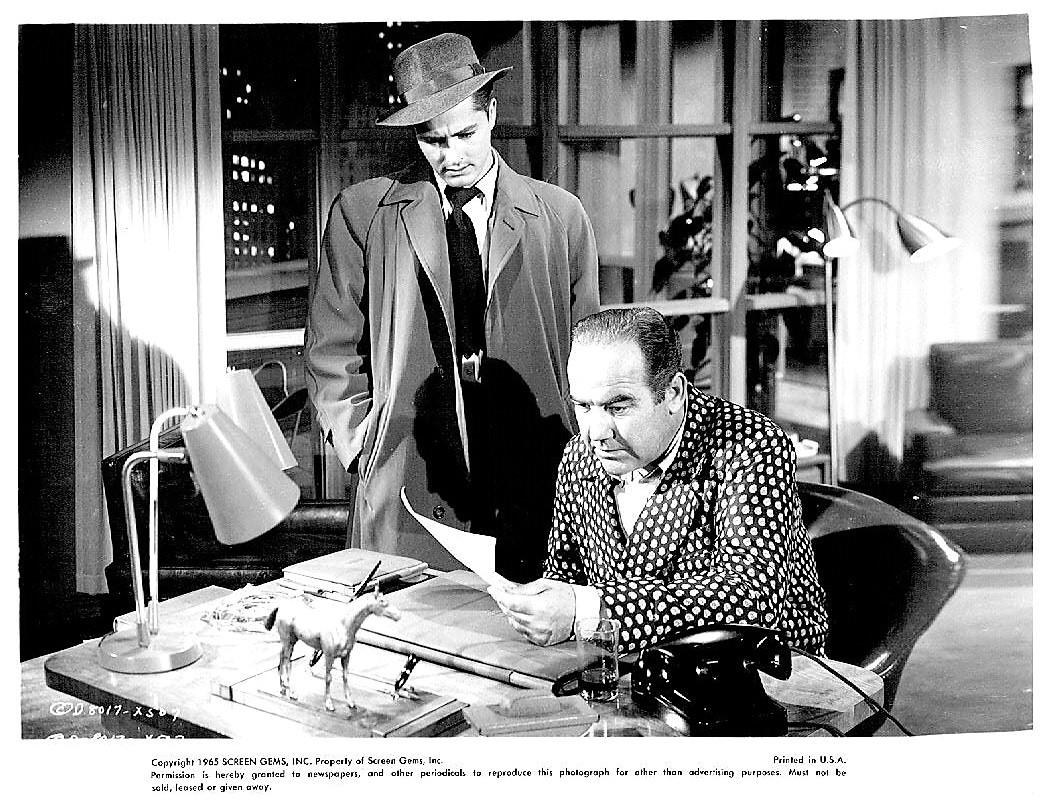 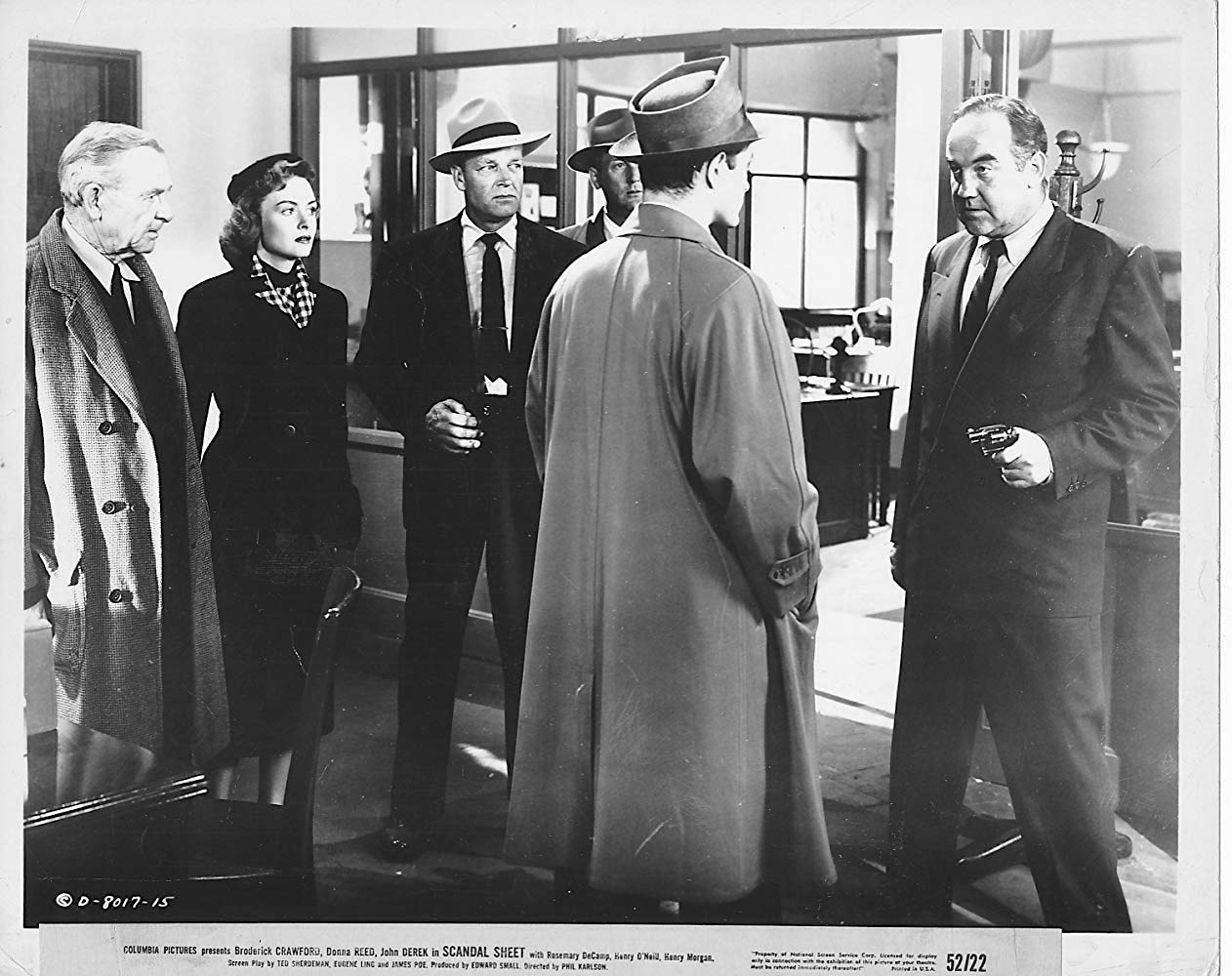 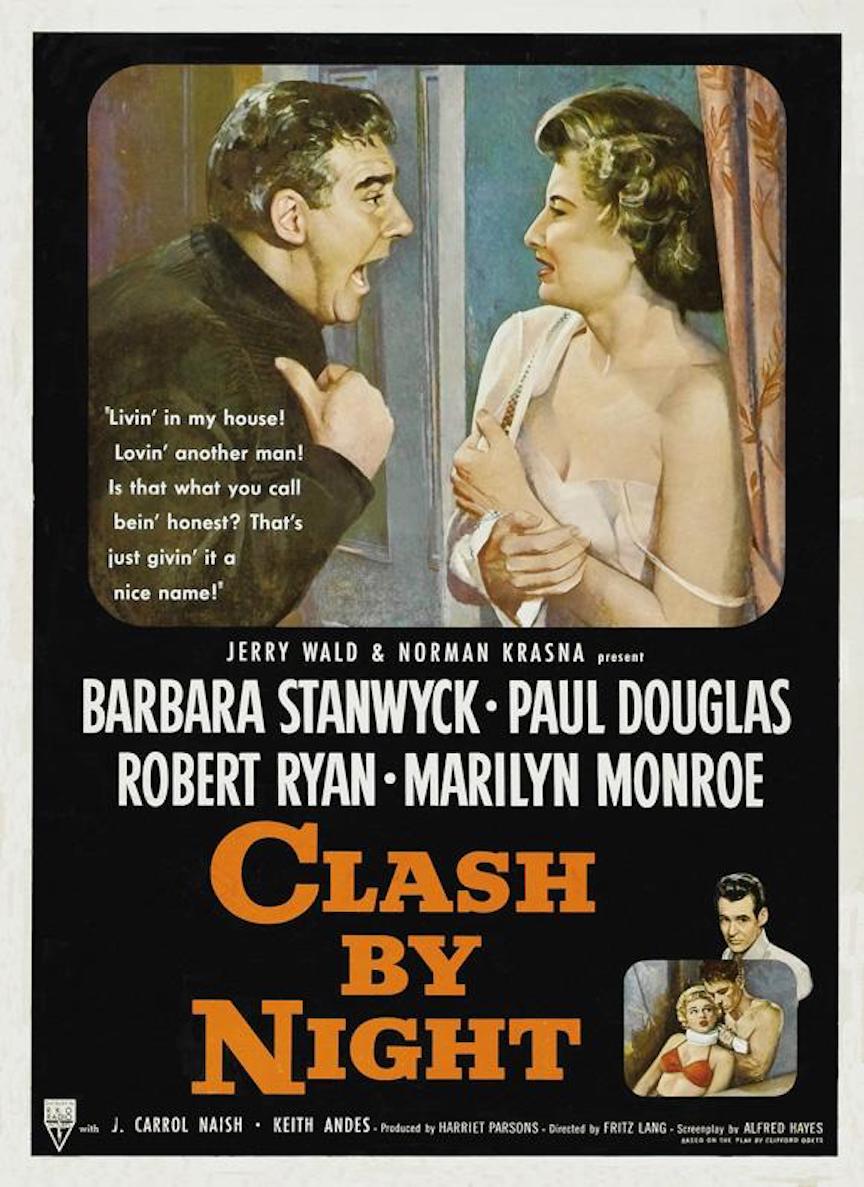 Directed by Fritz Lang with a screenplay by Alfred Hayes based on the play by Clifford Odet. The film stars Barbara Stanwyck as Mae Doyle D’Amato, Paul Douglas as Jerry D’Amato Robert Ryan as the volcanic Earl Pfeiffer, Marilyn Monroe as Peggy, J. Carrol Naish as Uncle Vince.

Clash By Night is a moody piece of noir with Barbara Stanwyck playing the world weary and cynical Mae Doyle, who returns home to her fishing community after her disillusionment living in the city. “Home is where you come when you run out of places.” Fisherman Paul Douglas is the kindhearted lug who winds up falling for Mae though he knows she’s filled with a fiery discontentment. Once Jerry introduces Mae to his friend Earl, an alienated woman-hater, the sexual tension develops. Earl spends his time getting drunk and obsessing about his stripper wife. At first Mae feels an instant aversion toward the gruff misogynist. Escaping the gravitational pull by the sexual attraction she feels with the dangerous Earl pushes her closer to marrying the clueless Jerry who is confounded by his sudden good fortune. Unfortunately this does not keep Earl away from Mae as he pursues her, who is by now disenchanted with playing the dutiful housewife and mother. Stanwyck is powerful as the unfaithful but guilt-ridden Mae. The film co-stars Marilyn Monroe as Peggy who idolizes Mae’s independent streak. J. Carrol Naish plays Paul Douglas’ no good Uncle Vince who mooches off his nephew. More of a dark Soap Opera than noir for it’s lack of crime, the film’s moodiness and gloomy edginess holds for me a place for Clash By Night in the noir cannon. 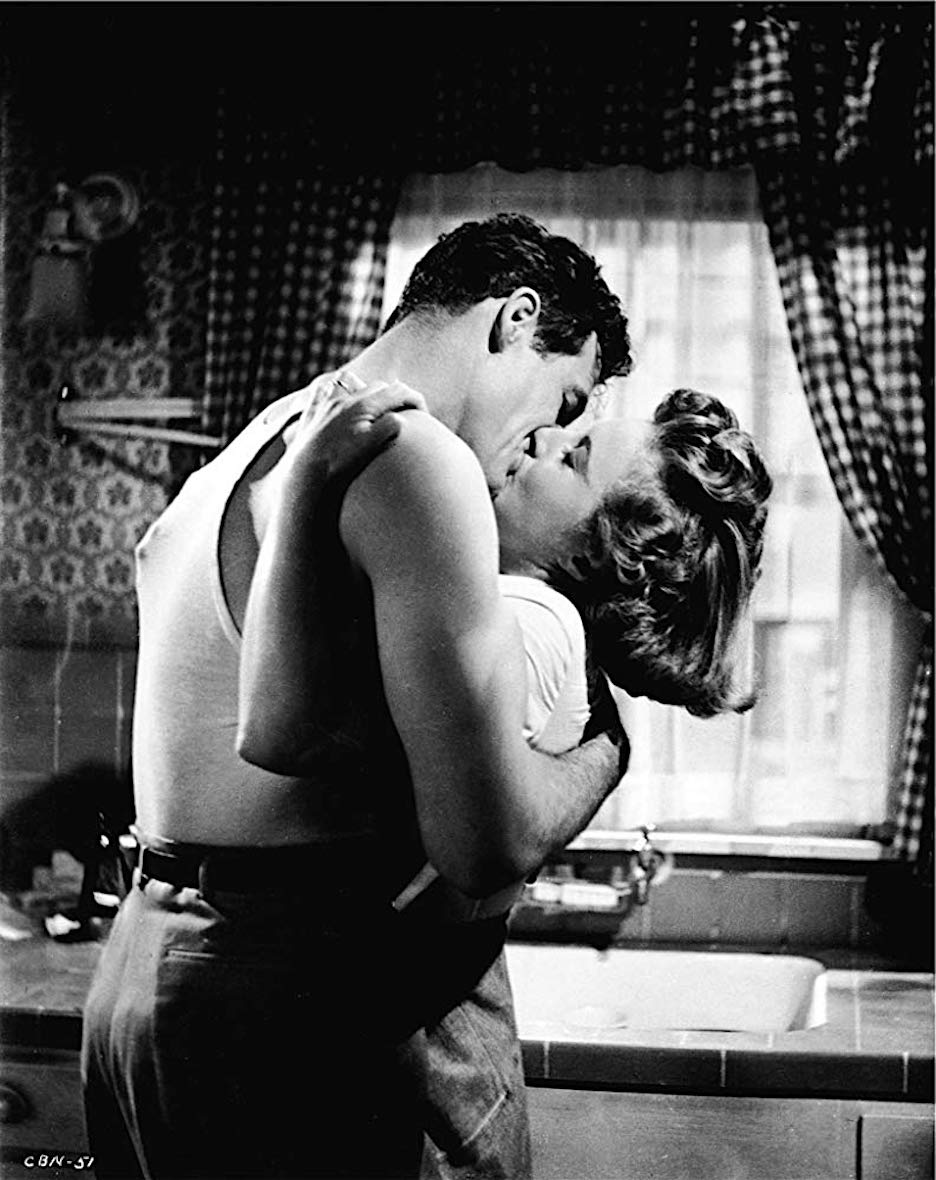 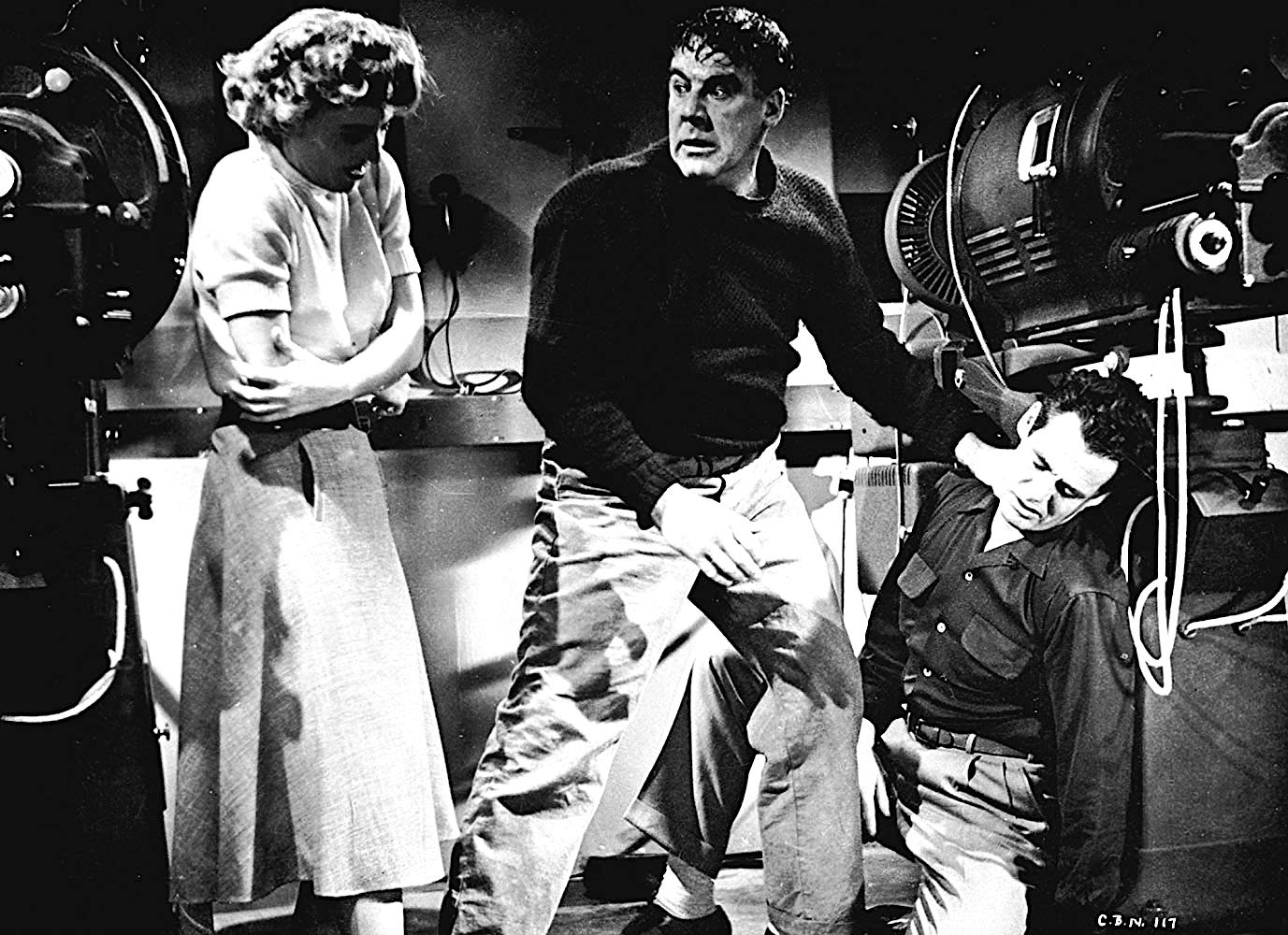 Mae Doyle D’Amato: “What do you want,Joe, my life’s history? Here is is in four words: Big ideas, small results.”

Mae Doyle: “Saint Paul. He was big too, like Jerry. I’ll say one thing. He knew how to handle women.”

Peggy: “Is that what you want from a man?”

Mae Doyle: “Confidence! I want a man to give me confidence. Somebody to fight off the blizzards and floods! Somebody to beat off the world when it tries to swallow you up! Me and my ideas.” 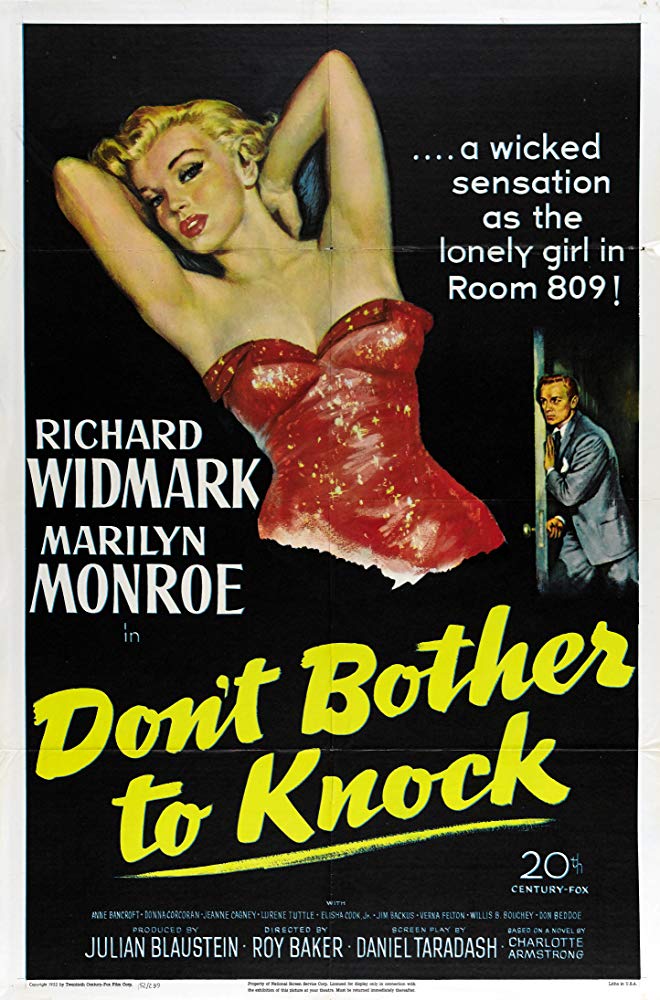 Directed by British horror maestro Roy Ward Baker he brings a taut psychological spring waiting to be uncoiled. With a screen play by Daniel Taradash based on the novel by Charlotte Armstrong. Cinematography by Lucien Ballard (The Killing 1956, The Wild Bunch 1969, The Getaway 1972) who creates closed in frames and a sense of paranoia and claustrophobic dread.

Marilyn Monroe is quite revelatory as Nell Forbes a very disturbed young woman who lives in a fantasy world and is a dangerous psychotic staying in a New York City hotel. Elisha Cook Jr. is the hotel elevator operator who is keeping an eye on his mental patient sister and tries to keep her out of trouble. He recommends that she babysit Jim Backus and Lurene Tuttle’s daughter. This turns out to be a very very bad idea!

In the mean time Richard Widmark is Jed Towers the hard-hearted airline pilot who has just been dumped by his torch singer girlfriend (Anne Bancroft). Towers sees Nell through the window and gets the idea that the two can get together and share a drink. When Nell starts having delusions that Jed is her dead boyfriend, he realizes that something is wrong with this beautiful waif. 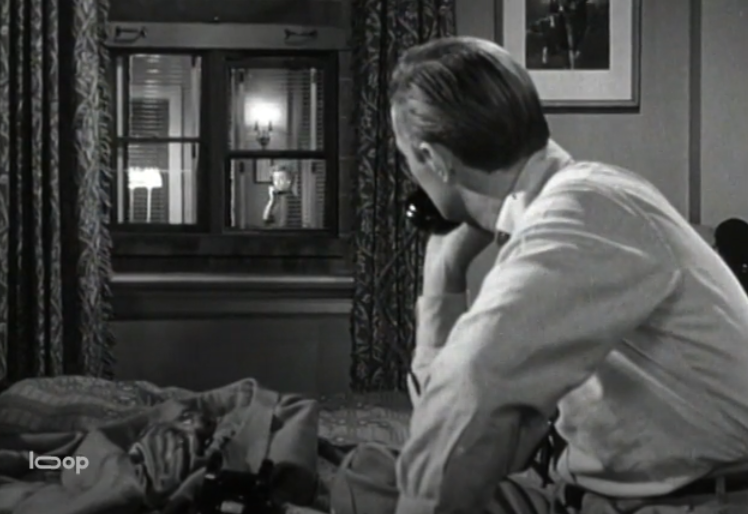 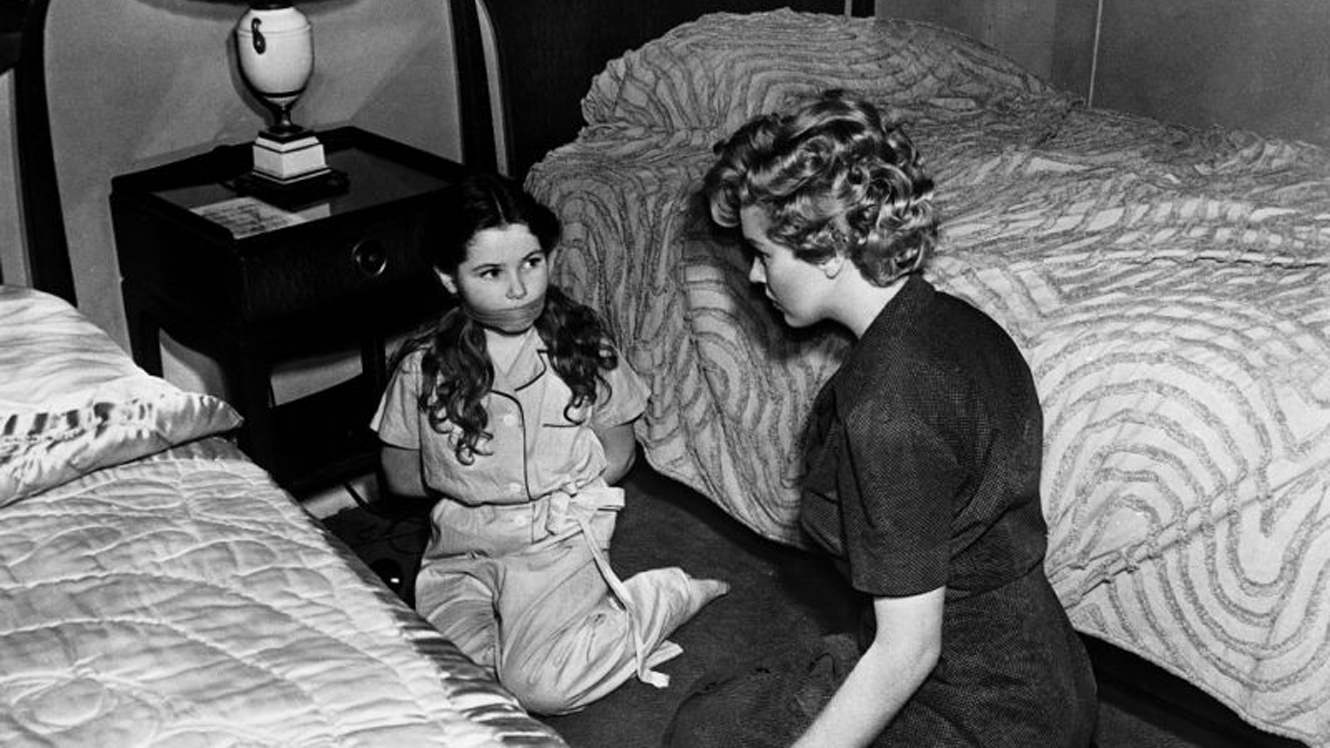 Nell Forbes: “I don’t know. I suppose so. Are you sure you want me?”

Jed Towers: “Yeah. You’re the one I want, alright. Are you doing anything you couldn’t be doing better with somebody else?”

Nell Forbes: “I guess I’ll have to hang up!”

Jed Towers: “Why? You cant get hurt on the telephone.”

Nell Forbes: “Who are you?”

Jed Towers: “I told you. The man across the way. A lonely soul”

Jed Towers: “I’m not peculiar. I’m just frustrated. I got a bottle of rye. And as I was saying, what are you doing?”

Jed Towers: “You and your wife fight, argue all the time?”

Joe the Bartender: “Some of the time she sleeps.” 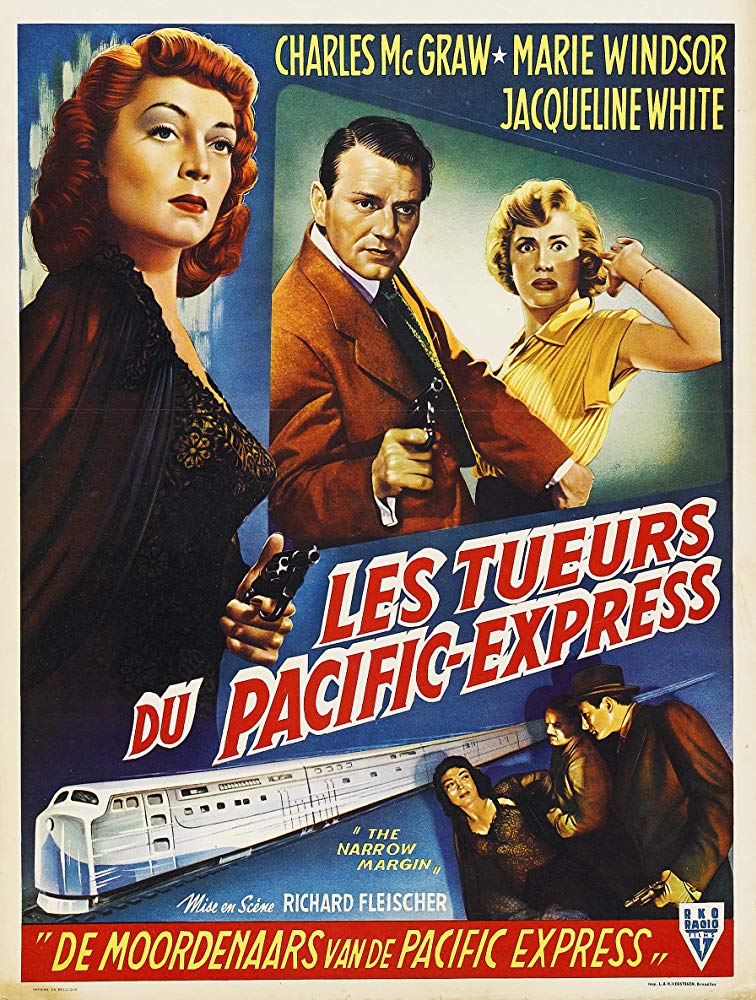 Directed by Richard Fleischer with a screenplay by Earl Felton from a story by Martin Goldsmith and Jack Leonard. With the polished, compelling and claustrophobic cinematography by George E. Diskant. (They Live By Night 1948, On Dangerous Ground 1951).

Charles McGraw plays the tough Det. Sgt. Walter Brown who is assigned to protect a mobster’s widow Marie Windsor as Mrs. Frankie Neall, who is traveling by train from Chicago to Los Angeles, while the vicious assassins try with fervor to take Frankie Neall’s wife out of commission so she can’t testify. Aboard the train is Jacqueline White as Ann Sinclair who Detective Brown fears will be mistaken for mobster’s widow.

The sarcastic Windsor and rough edged McGraw possess there usual grit and there’s a memorable scene where the corpulent actor Paul Maxey is blocking the train’s passageway he comments amiably that “Nobody loves a fat man except his grocer and his tailor.”

Det Sgt Gus Forbes: “What kind of a dish?” 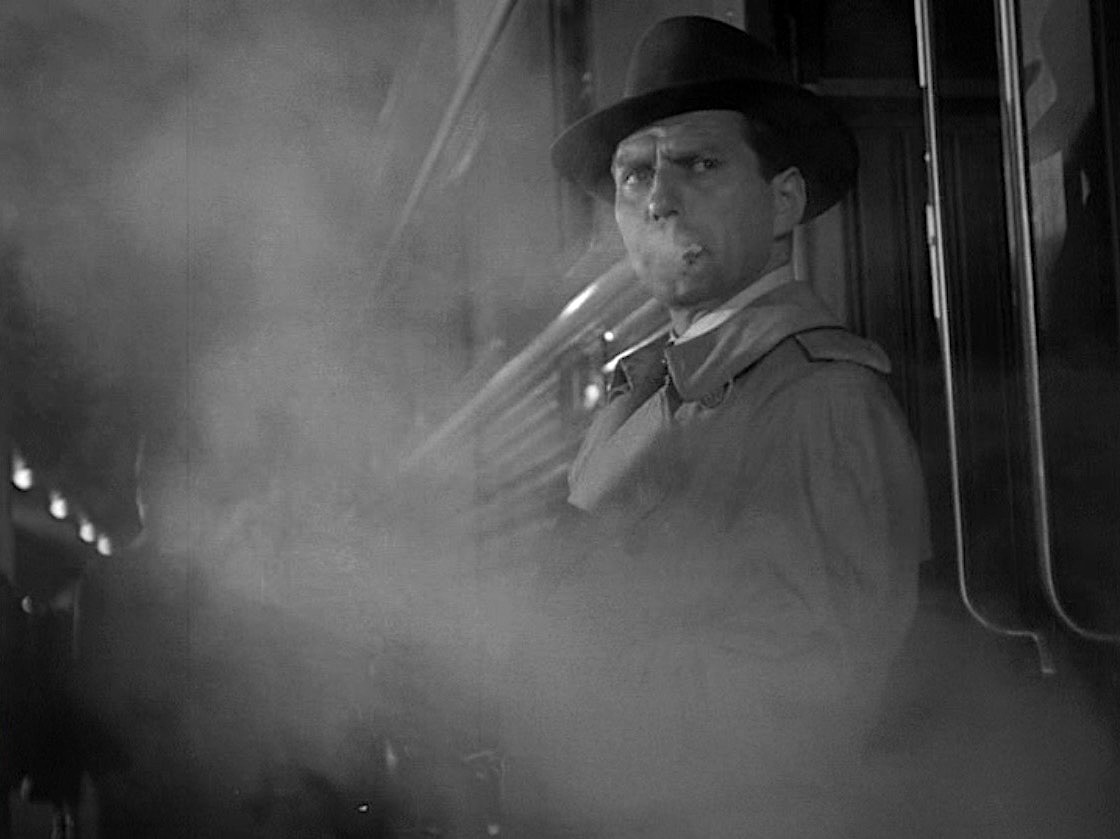 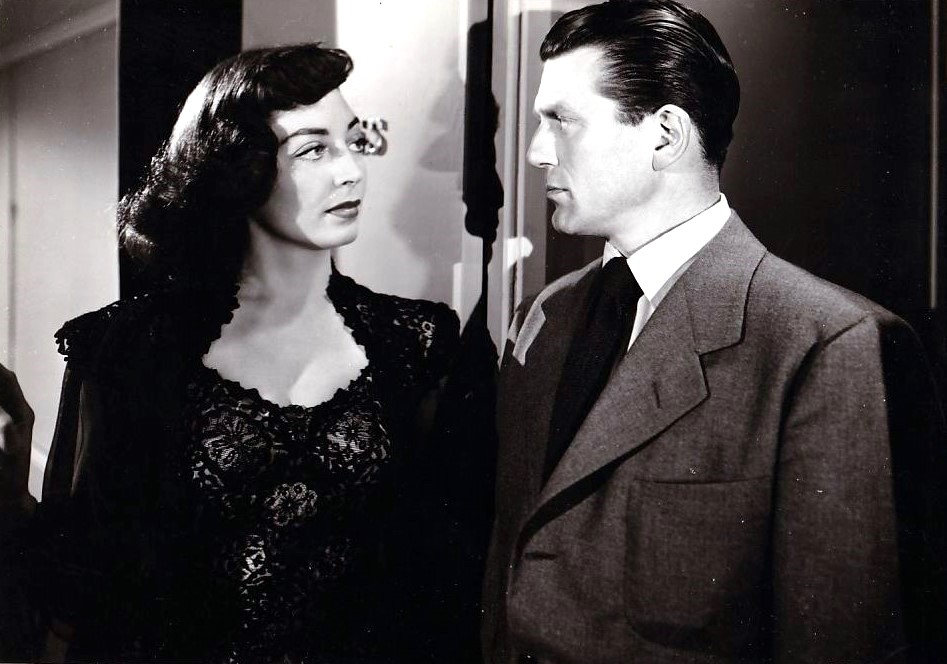 Walter Brown: “Sister, I’ve known some pretty hard cases in my time; you make ’em all look like putty. You’re not talking about a sack of gumdrops that’s gonna be smashed – you’re talking about a dame’s life! You may think it’s a funny idea for a woman with a kid to stop a bullet for you, only I’m not laughing!”

Mrs Neall: “Where do you get off, being so superior? Why shouldn’t I take advantage of her – I want to live! If you had to step on someone to get something you wanted real bad, would you think twice about it?”

Mrs Neall:  “In a pig’s eye you would! You’re no different from me.”

Mrs Neall: “Not till I tell you something, you cheap badge-pusher! When we started on this safari, you made it plenty clear I was just a job, and no joy in it, remember?”

Mrs Neall: “Okay, keep it that way. I don’t care whether you dreamed up this gag or not; you’re going right along with it, so don’t go soft on me. And once you handed out a line about poor Forbes getting killed, ’cause it was his duty. Well, it’s your duty too! Even if this dame gets murdered.”

Walter Brown: “You make me sick to my stomach.”

Mrs Neall: “Well, use your own sink. And let me know when the target practice starts! “

This is your EverLovin’ Joey, just sayin’ in a noir world– if you play with matches you’re liable to get burned!