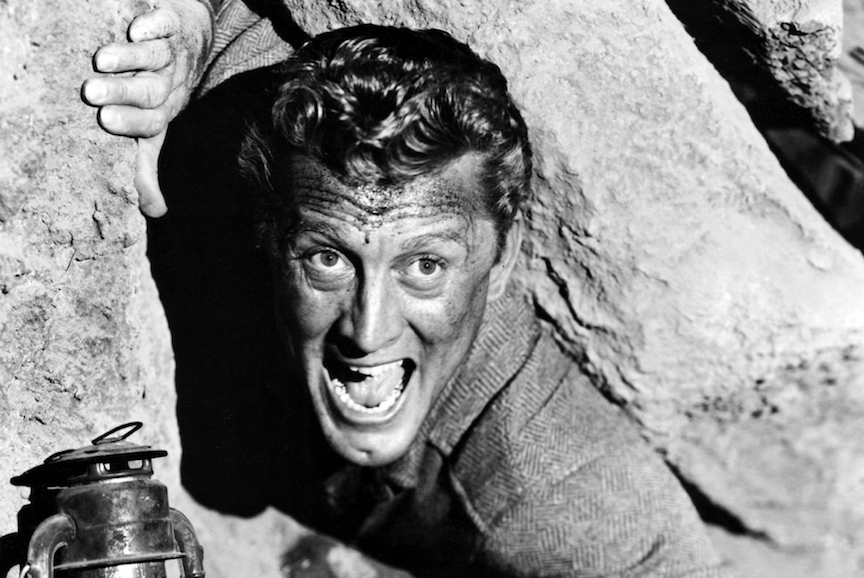 Rough, tough Chuck Tatum, who battered his way to the top … trampling everything in his path – men, women and morals!

Directed by Billy Wilder, and written by Billy Wilder, Lesser Samuels, and Walter Newman. Ace in the Hole stars Kirk Douglas as journalist Chuck Tatum, who Molly Haskell points out gives a “ferociously determined–over the top, sadomasochistic performance.” Jan Sterling is brilliant as she pulls off disdain and and a bitter indifference to her dying husband, with “tremendous, nervy gusto” and a quite witty toss-out of funny one liners. The cast also includes Robert Arthur, Porter Hall, Frank Cady as Al Federber, Richard Benedict as Leo Minosa, Lewis Martin, Ray Teal, and Gene Evans. The film has a eye piercing grasp of realist cinematography by Charles Lang (The Ghost and Mrs Muir 1947,  Some Like it Hot 1959, Charade 1963, Wait Until Dark 1967), and a stirring score by Hugo Friedhofer and costume design by Edith Head.

Ace in the Hole can be categorized as a socio-noir film, not unlike the films of Elia Kazan. Writer Molly Haskell puts it this way:

Noir in Broad Daylight By Molly Haskell Billy Wilder’s Ace in the Hole “almost requires an honorary expansion of the term film noir. There are no private eyes in seedy offices or femmes fatales lurking in the shadows of neon-lit doorways, no forces of evil arrayed against a relatively honorable hero. This emotional snake pit, the darkest of Wilder’s dark meditations on American folkways, takes place under the relentless sun of a flat New Mexican desert. The noir is the interior inside a mountain tunnel where a man is trapped and suffocating, and inside the mind of a reporter rotting from accumulated layer of self-induced moral grime.”

Andrew Dickos says in Street With No Name that “Wilder’s film noirs are problematic cases because their visions are steeped in cruel and corrosive humor, distinctive in its own right and in its ability to function apart from the noir universe.” 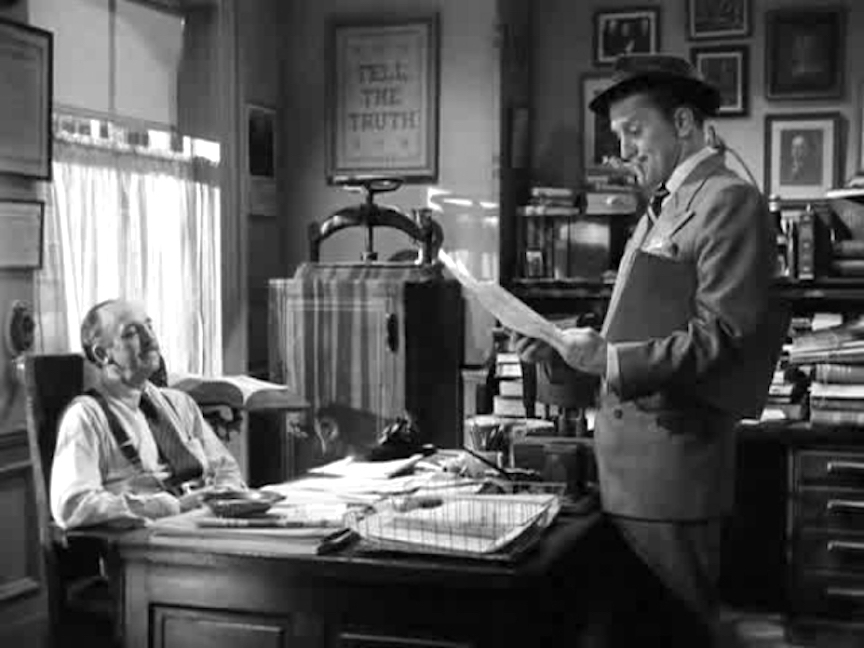 An unethical crackerjack journalist Charles Tatum –recently fired from his job in New York rolls into town– is literally towed in without a cent in his pocket, and is virtually stranded in the sleepy New Mexican town of Escudero. He boldly walks into the small newspaper office and offers himself up for sixty dollars a week to the editor Jacob Boot (Porter Hall) who wears suspenders and a belt, both. After a year of dull reporting, Boot sends Charles Tatum to cover a rattlesnake hunt. Charles takes photographer Herbie (Robert Arthur) along with him, looking for a real story that he can grab hold of. On their way to cover the rattlesnake hunt they stumble onto a local tourist attraction right off the main highway. There has been a cave in and Leo Menosa is trapped. Leo was sacrilegiously poaching burial possessions from the ancient Indian cave dwelling, and that perhaps sealed his fate. He sells the pots at his family’s general store/diner run by his wife Lorraine (Jan Sterling). Lorraine is a sassy and icy bleached blond who’s fed up with her life with Leo. Leo finds his legs pinned beneath heavy rocks with dirt and dust snowing all over his unshaven face. The sense of claustrophobia can make your own chest heave with the lack of oxygen each frame draws you inside the buried hole in the cave. 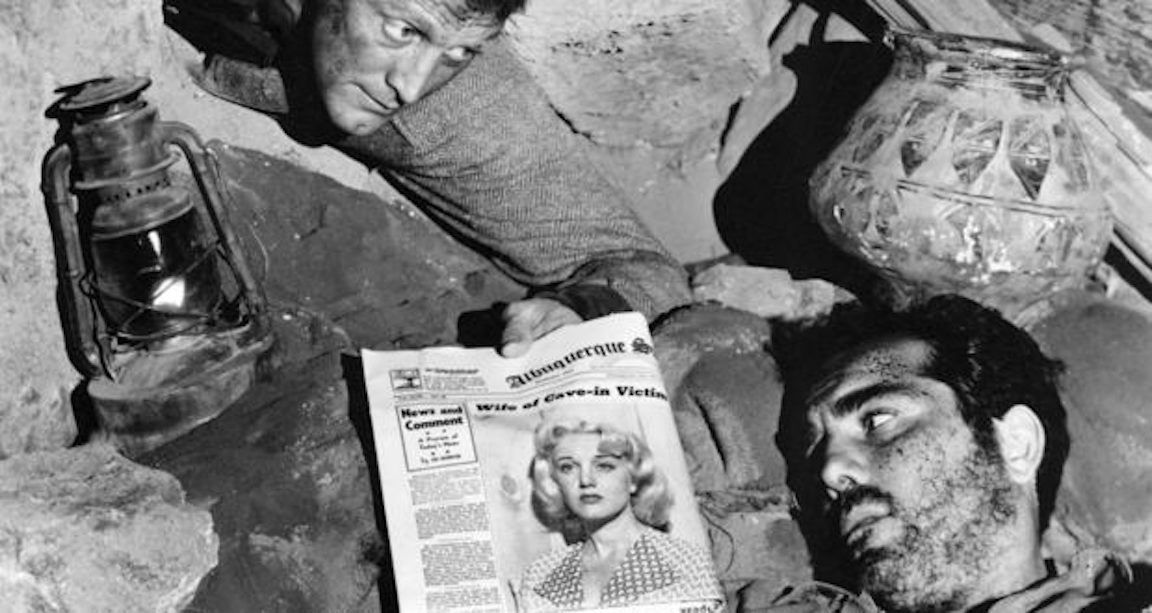 Tatum hasn’t any morals and delays the rescue to develop a ‘human interest’ story — a real front page shocker!– that will probably get his job back at his cushy desk in New York City. He has his eyes on the Pulitzer Prize and not on the safety of the poor schnook who is buried alive in the cave. Tatum brazenly begins to manipulate the players around him so that he is in control of the story. He first arranges for the rescue operation to be diverted to the engineer going in through the top of the mountain which will prolong his recovery by a week instead of the 12 hours it could take to get poor Leo out. He ingratiates himself with the crooked sheriff angling for re-elecation and promises big time publicity. This puts him in a position to keep out other journalists from getting access to the story.

Charles Tatum: “I don’t belong in your office. Not with that embroidered sign on the wall; it gets in my way.”

Jacob Q. Boot : “Then it does bother you a little.”

Charles Tatum: “Not enough to stop me. I’m on my way back to the top, and if it takes a deal with a crooked sheriff, that’s alright with me! And if I have to fancy it up with an Indian curse and a broken-hearted wife for Leo, then that’s alright too!”

Herbie Cook: “The old man sure looked bad. Did you see his face?”

Herbie Cook: “Like the faces of those folks you see outside a coal mine with maybe 84 men trapped inside.”

Charles Tatum: “One man’s better than 84. Didn’t they teach you that?”

Herbie Cook: “Teach me what?”

Charles Tatum: “Human interest. You pick up the paper, you read about 84 men or 284, or a million men, like in a Chinese famine. You read it, but it doesn’t stay with you. One man’s different, you want to know all about him. That’s human interest.” 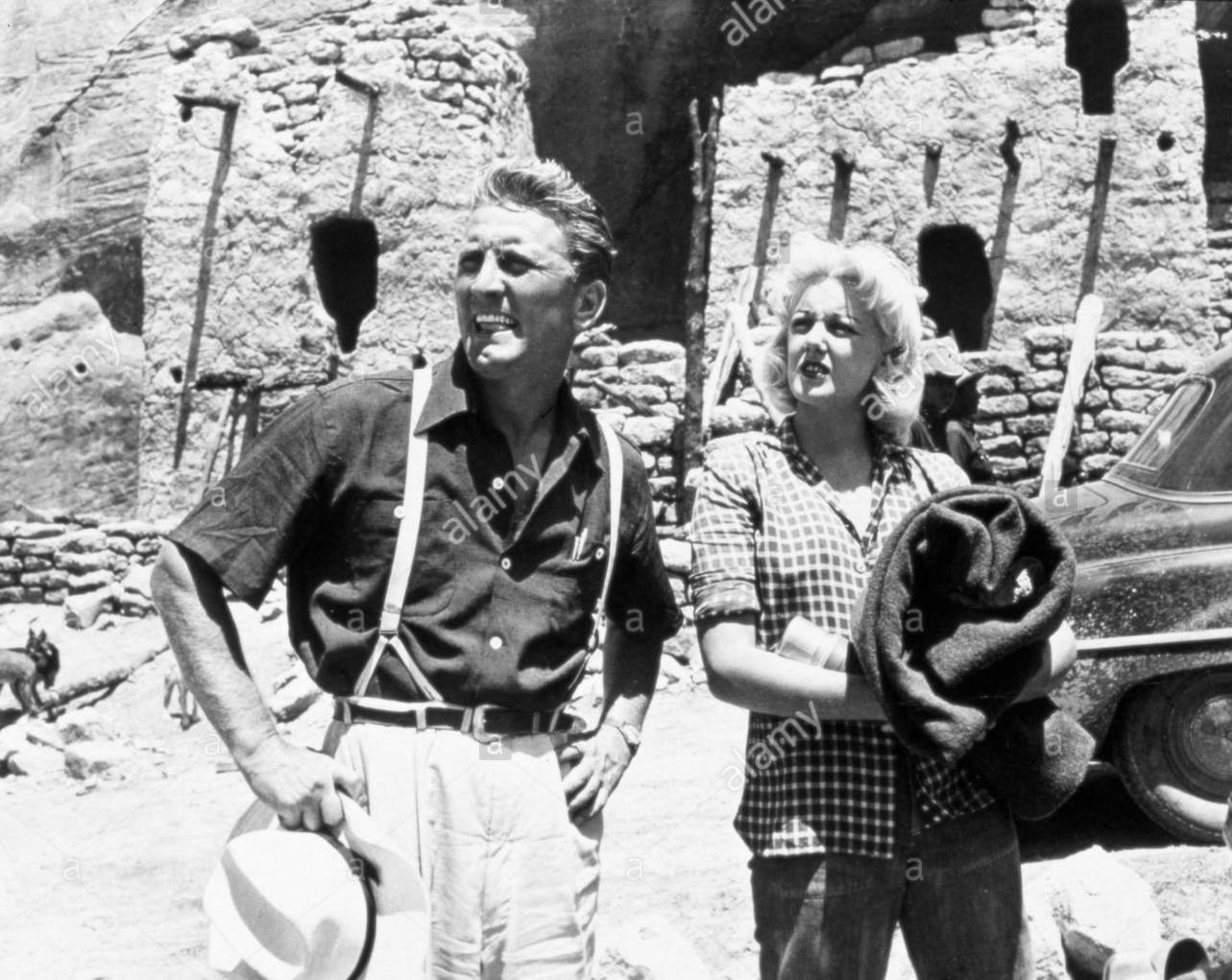 Jan Sterling wants to just take her suitcase and leave the poor slob in the literal dust and get out of there. But Tatum, after a hard two slaps to the face raising welts (I swear those slaps were real!) tells her that she is going to play the grieving wife for the public face of the story. She decides to stay around when spectators from all over begin showing up and the money starts flowing in. They renamed the film The Big Carnival, as the entire site becomes a voyeuristic masturbatory orgy of onlookers and parasites who want to see Leo in the midst of his predicament. The unsavory hawkers sell their goods, Carnivals set up a ferris wheel and rides, and pushing cotton candy and hot dogs, balladeers making up hero songs about Leo and swarming like ants all over the tragedy to feed off the situation for their own curiosity. The human interest story in the film is more about the way human nature is geared toward our tendency to be social piranha, than about caring individuals who want to reach out a hand and help.

Tatum and Sheriff Gus Kretzer (Teal) strong arm the construction contractor (Lewis Martin ) to taking a longer route to the the waning Leo to drag the story out for the week it will take for Tatum to make the headlines nationally. Drawing out the tragedy, Leo becomes a victim twice. The whole mood of the piece is claustrophobic and unsettling.

Lorraine throws herself at Tatum who treats her like garbage all the while Leo is daydreaming about getting out of the hole and celebrating their fifth wedding anniversary, for which he’s bought her a garish fur wrap. 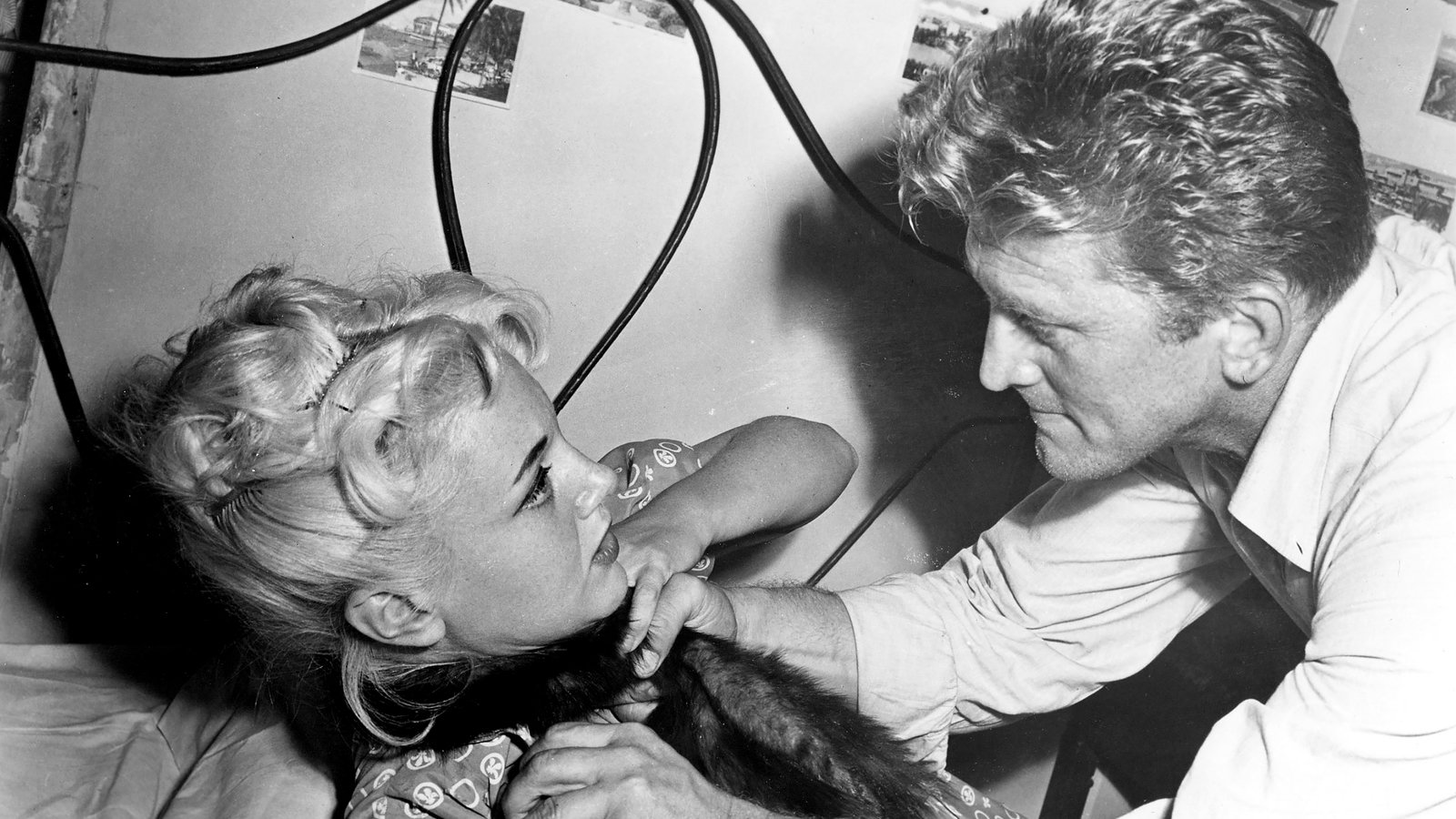 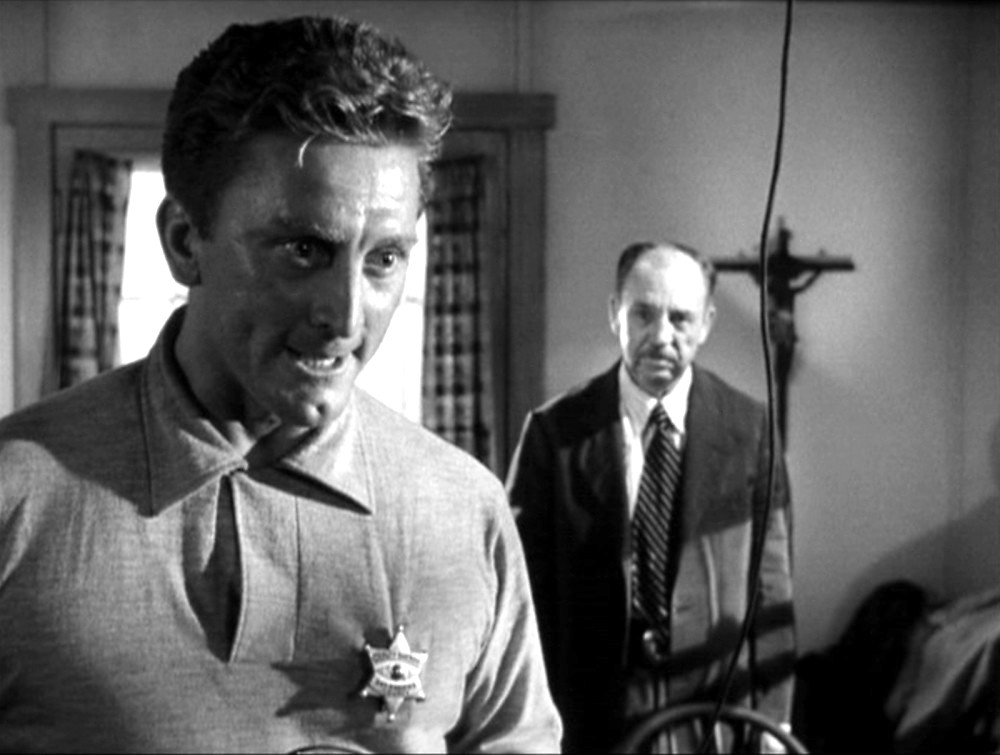 From the beginning Tatum has pretended to be Leo’s advocate to get himself out of the hole. Bringing him the newspaper and cigars, offering him a chance to come with him to New York City once he gets out. Even as Leo is slipping away, Tatum keeps trying to suck more life out of the guy just to prolong the story. He’s like a man who has made a deal with devil and sold his soul for the story. He’s made it so he is the only one authorized to go into the cave and visit with Leo. Leo trusts him and considers him his friend, and doesn’t realize that he is exploiting him as a bargaining tool to get his NYC boss to rehire him back to the newspaper at $1000 a day.

The film is bold, in-your-face,and starkly grim. The frenetic outside “carnival” is offset by the closing in of the hole in the cave that is quickly closing in on Leo. 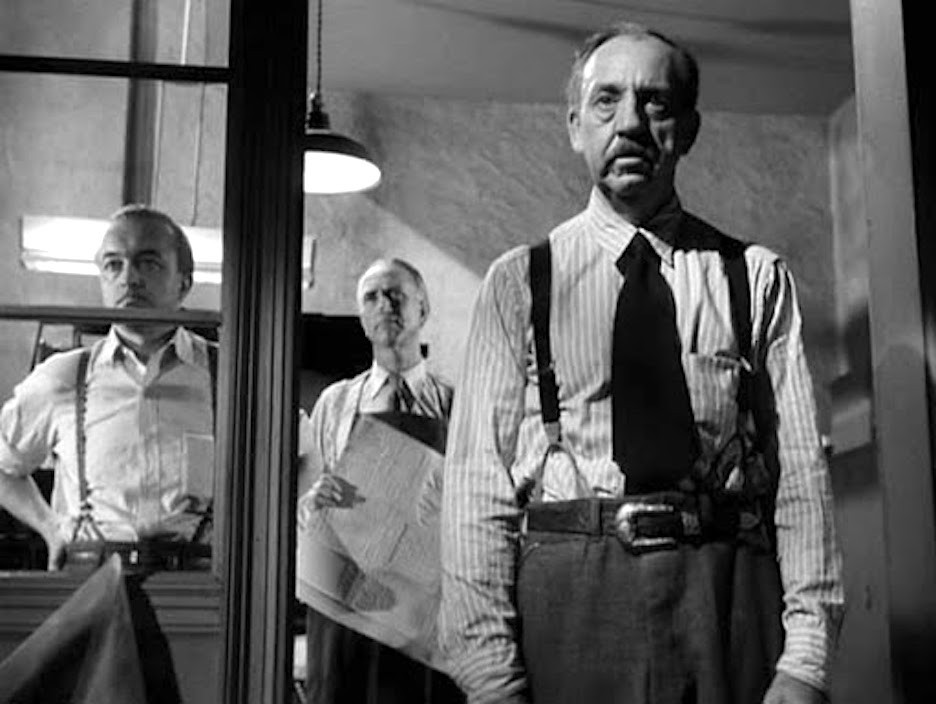 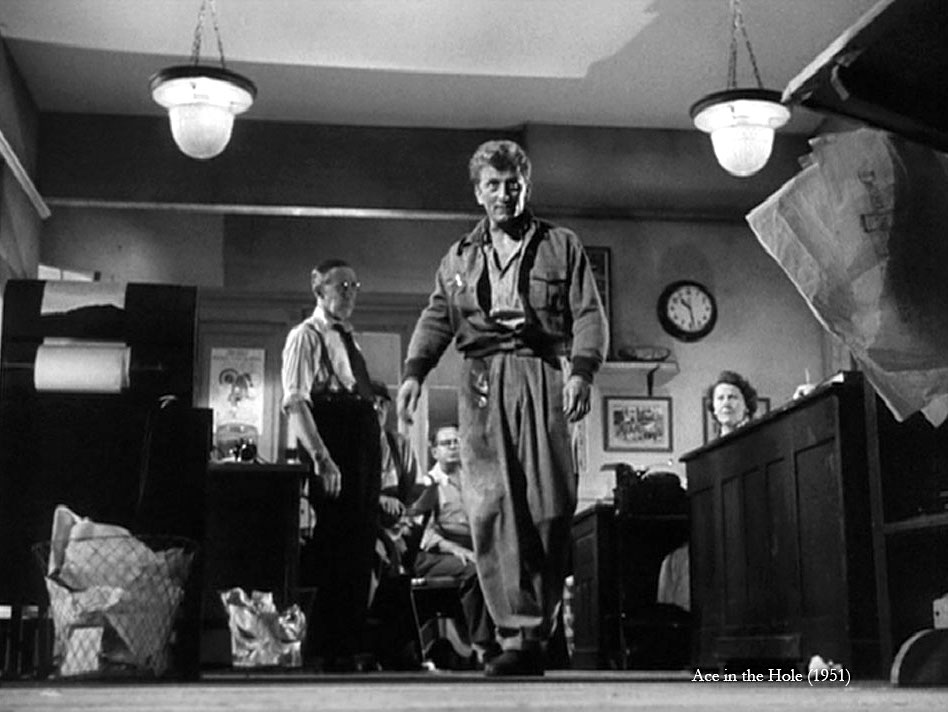 The film was a hit outside of the United States but did not do well in the U.S. Douglas and Starling were phenomenal in their roles. It was  hard to decide who was the worse human being, though, Tatum comes in first as the conundrum of the self-effacing self aggrandizing provocateur who laughs at the sampler in the office that boasts TELL THE TRUTH, and who then causes Leo to lose his life. “Bad news sells best. Cause good news is no news.”

Sterling had some of the best lines in the film.  “I met a lot of hard-boiled eggs in my life, But you, You’re twenty minutes!”

“I don’t go to church, kneeling bags my nylons.” – Lorraine

In the end the devil catches up with Charles Tatum…

He says to editor Boot–“How’d you like to make yourself a thousand dollars a day, Mr. Boot? I’m a thousand-dollar-a-day newspaperman. You can have me for nothing.”

The film possesses intense moments while Douglas stares into the abyss, his eyes on fire, his face locked in a monomaniacal grimace as Leo slowly takes his last breathes. There is not one atonement in Chuck Tatum’s character to iron out the cynicism of Wilder’s dark vision. There are few players who exhibit a scrap of humanity.

RB: Critics still haven’t written a great deal about it, but it was deeply affecting…{…}…being a depiction of how some people exploit others’ tragedies.

BW:   Our man, the reporter, was played by Mr. Kirk Douglas. Now, he was on the skids and he thought that a great story would get him back into the big time, big leagues. He remembered the Floyd Collins story.  Now, I looked up the Floyd Collins story. They composed a song, they were selling hot dogs, there was a circus up there, literally a circus, people came. I was attacked by every paper because of that movie. They loathed it. It was cynical, my ass. I tell you, you read about a plane crash somewhere nearby and you want to check out the scene, you can’t get to it because ten thousand people are already there: They’re picking up little scraps, ghoulish souvenir hunters. After I read those horrifying reviews about Ace in the Hole, I remember I was going down Wilshire Boulevard and there was an automobile accident. Somebody was run over. I stopped my car. I wanted to help that guy who was run over. Then another guy jumps out of his car and photographs the thing. “You’d better call an ambulance” I said. “Call a doctor my ass. I’ve got to get to the L.A. Times I’ve got a picture. I’ve got to move. I just took a picture here. I’ve got to deliver it.” But you say that in a movie, and the critics think you’re exaggerating.”

This is your EverLovin’ Joey saying just give me a shout if you’re ever stuck in a hole and I’ll come running!