THE SILENT YEARS: When we started not giving a damn on screen!

In celebration of our upcoming Anti Damsel Blogathon on August 15 & 16, I had this idea to provide a list of bold, brilliant and beautiful women!

There was to be no indecent exposure of the ankles and no SCHWOOSHING!  Not in this Blogathon baby!

From the heyday of Silent film and the advent of talking pictures, to the late ‘20s to 1934 Pre-Code Hollywood, films were rife with provocative and suggestive images, where women were kicking up a storm on screen… The end of the code during the early 60s dared to offer social commentary about race, class, gender and sexuality! That’s our party!

In particular, these bold women and the screen roles they adopted have become legendary. They sparked catchy dialogue, inspired fashion trends, or just plain inspired us… All together there are 111 of SOME of the most determined, empowered and uniquely fortified femmes of classic film…!

First of course I consulted the maven of all things splendid, shimmery and SILENT for her take on silent film actresses and the parts that made them come alive on the immortal screen…. Fritzi at Movies Silently has summoned up these fabulous femmes….

Now to unleash the gust of gals from my tornadic mind filled with favorite actresses and the characters that have retained an undying sacred vow to heroine worship… In their private lives, their public persona and the mythological stardom that has & still captivates generations of  fans, the roles they brought to life and the lasting influence that refuses to go away…!

Because they have their own unique rhythm to the way they moved through the world… a certain kind of mesmerizing allure, and/or they just didn’t give a hoot, a damn… nor a flying fig!

“The most courageous act is still to think for yourself. Aloud”-Coco Chanel

Stars like Bette Davis, Barbara Stanwyck , Joan Crawford  and Ida Lupino managed to keep re-inventing themselves. They became spirited women with an inner reserve of strength and a passion for following their desires!

The following actresses and their immortal characters are in no particular order…!

END_OF_DOCUMENT_TOKEN_TO_BE_REPLACED

“Unexpressed emotions will never die. They are buried alive and will come forth later in uglier ways.”
― Sigmund Freud

“Ladies and gentlemen- welcome to violence; the word and the act. While violence cloaks itself in a plethora of disguises, its favorite mantle still remains sex.” — Narrator from Faster, Pussycat! Kill! Kill! (1965)

THE DARK PAGES NEWSLETTER  a condensed article was featured in The Dark Pages: You can click on the link for all back issues or to sign up for upcoming issues to this wonderful newsletter for all your noir needs!

Constance Towers as Kelly from The Naked Kiss (1964): “I saw a broken down piece of machinery. Nothing but the buck, the bed and the bottle for the rest of my life. That’s what I saw.”

Griff (Anthony Eisley) The Naked Kiss (1964): “Your body is your only passport!”

Catherine Deneuve as Carole Ledoux in Repulsion (1965): “I must get this crack mended.”

Monty Clift Dr. Cukrowicz Suddenly, Last Summer (1959) : “Nature is not made in the image of man’s compassion.”

Patricia Morán as Rita Ugalde: The Exterminating Angel 1962:“I believe the common people, the lower class people, are less sensitive to pain. Haven’t you ever seen a wounded bull? Not a trace of pain.”

Ann Baxter as Teresina Vidaverri Walk on the Wild Side 1962—“When People are Kind to each other why do they have to find a dirty word for it.”

The Naked Venus 1959–“I repeat she is a gold digger! Europe’s full of them, they’re tramps… they’ll do anything to get a man. They even pose in the NUDE!!!!”

Darren McGavin as Louie–The Man With the Golden Arm (1955): “The monkey is never dead, Dealer. The monkey never dies. When you kick him off, he just hides in a corner, waiting his turn.”

Baby Boy Franky Buono-Blast of Silence (1961) “The targets names is Troiano, you know the type, second string syndicate boss with too much ambition and a mustache to hide the facts he’s got lips like a woman… the kind of face you hate!”

Lorna (1964)- “Thy form is fair to look upon, but thy heart is filled with carcasses and dead man’s bones”

Peter Fonda as Stephen Evshevsky in Lilith (1964): “How wonderful I feel when I’m happy. Do you think that insanity could be so simple a thing as unhappiness?”

Glen or Glenda (1953)– “Give this man satin undies, a dress, a sweater and a skirt, or even a lounging outfit and he’s the happiest individual in the world.”

Johnny Cash as Johnny Cabot in Five Minutes to Live (1961):“I like a messy bed.”

Dr. Moreau (Charles Laughton) Island of Lost Souls: “Do you know what it means to feel like God?”

The Snake Pit (1948): Jacqueline deWit as Celia Sommerville “And we’re so crowded already. I just don’t know where it’s all gonna end!” Olivia de Havilland as Virginia Stuart Cunningham “I’ll tell you where it’s gonna end, Miss Somerville… When there are more sick ones than well ones, the sick ones will lock the well ones up.”

Delphine Seyrig as Countess Bathory in Daughters of Darkness (1971)– “Aren’t those crimes horrifying. And yet -so fascinating!”

Julien Gulomar as Bishop Daisy to the Barber (Michel Serrault) King of Hearts (1966)–“I was so young. I already knew that to love the world you have to get away from it.”

The Killing of Sister George (1968) -Suzanna York as Alice ‘CHILDIE’: “Not all women are raving bloody lesbians, you know” Beryl Reid as George: “That is a misfortune I am perfectly well aware of!”

The Lickerish Quartet (1970)–“You can’t get blood out of an illusion.”

THE SWEET SOUND OF DEATH (1965)– Dominique-“I’m attracted” Pablo-” To Bullfights?” Dominique-” No, I meant to death. I’ve always thought it… The state of perfection for all men.”

Peter O’Toole as Sir Charles Ferguson Brotherly Love (1970): “Remember the nice things. Reared in exile by a card-cheating, scandal ruined daddy. A mummy who gave us gin for milk. Ours was such a beautifully disgusting childhood.”

Maximillian Schell as Stanislaus Pilgrin in Return From The Ashes 1965: “If there is no God, no devil, no heaven, no hell, and no immortality, then anything is permissible.”

WHAT DOES PSYCHOTRONIC MEAN?

psychotronic |ˌsīkəˈtränik| adjective denoting or relating to a genre of movies, typically with a science fiction, horror, or fantasy theme, that were made on a low budget or poorly received by critics. [1980s: coined in this sense by Michael Weldon, who edited a weekly New York guide to the best and worst films on local television.] Source: Wikipedia

In the scope of these transitioning often radical films, where once, men and women aspired for the moon and the stars and the whole ball of wax. in the newer scheme of things they aspired for you know… “kicks” yes that word comes up in every film from the 50s and 60s… I’d like to have a buck for every time a character opines that collective craving… from juvenile delinquent to smarmy jet setter!

FILM NOIR HAD AN INEVITABLE TRAJECTORY…

THE ECCENTRIC & OFTEN GUTSY STYLE OF FILM NOIR HAD NO WHERE ELSE TO GO… BUT TO REACH FOR EVEN MORE OFF-BEAT, DEVIANT– ENDLESSLY RISKY & TABOO ORIENTED SET OF NARRATIVES FOUND IN THE SUBVERSIVE AND EXPLOITATIVE CULT FILMS OF THE MID TO LATE 50s through the 60s and into the early 70s!

I just got myself this collection of goodies from Something Weird!

Just like Alice falling down the rabbit hole, Noir took a journey through an even darker lens… Out of the shadows of 40s Noir cinema, European New Wave, fringe directors, and Hollywood auteurs, brought more violent, sexual, transgressive, and socially transformative narratives into the cold light of day with a creeping sense of verité. While Film Noir pushed the boundaries of taboo subject matter and familiar Hollywood archetypes it wasn’t until later that we are able to visualize the advancement of transgressive topics.

END_OF_DOCUMENT_TOKEN_TO_BE_REPLACED

SOMEWHERE IN THE NIGHT (1946)- Fritz Kortner as Anzelmo – Dr. Oracle

This has been a little bit of love to these fabulous character actors who make the cinematic world go round!-Your Ever Lovin’ MonsterGirl 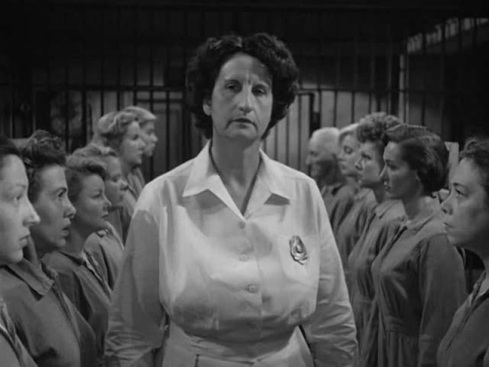 In Robert Siodmak’s sublime noir Cry of the City 1948 Emerson plays Madame Rose Given who runs a massage parlor, loves to cook, is a pancake eatin’ -looming ‘heavy’… who loves jewels and just wants a little place in the country where she can cook, eat pancakes and fresh eggs… yeah that’s livin’. From her brawny swagger to her grumbling yet leisurely voice, Emerson is the highlight of the film! 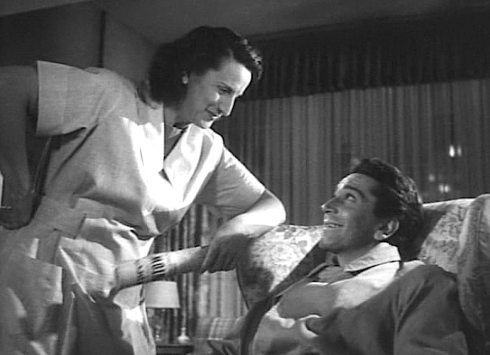 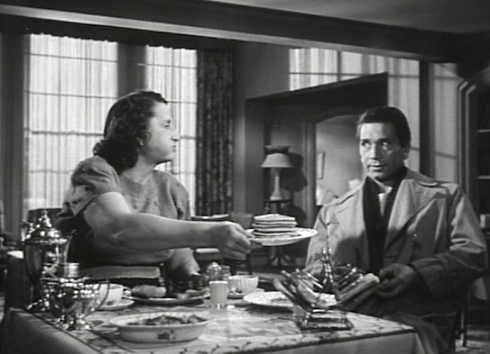 That’s why she didn’t even break a sweat when she strangled old lady DeGrasia for her jewelry. Darn old gal had the nerve to put up a struggle! And does she give self serving on the lam career criminal Marty Rome (Richard Conte) some neck rub while he’s hiding out at her place trying to make a deal. Rose finally gets the jewels as a trade for money and some wheels to get out of town with his girl Debra Paget…

Marty-“Pearl choker with a Ruby pendant. Seven rings. Diamond bracelet with the clasp broken. You must have been in a hurry ha?”

Marty- “In a locker in the subway station… I though if you went to all that trouble to get ’em once you may wanna get ’em again.”

Rose ‘massaging’ Martin- “hmmm…It is good isn’t it. I have the touch. It’s only given to a few. It’s a matter of knowing the currents of the body. Why waste this on fat old women who think they can lose a few pounds and be beautiful again… Fat old women who have too much money and too many jewels. They think the jewels make them beautiful and they fight to keep them like they fight the years that make them ugly.”

Rose ain’t someone I’d want giving me a rub down, and I sure wouldn’t want to meet her at the door as the Avon Lady either- Gee wiz.. that woman could scare the horns off the devil- She’s got a smirk & leer that makes her seem like she could eat small children. This pistol packing, masseuse who’s hands should be registered as lethal weapons- is one menacing lady who has earned her place here at The Last Drive In as Fiend of the Day!

Just look at that mug! Nah, I bet she was really a pussycat. I mean she was the voice of Borden’s Else the Cow afterall! Sadly-Hope Emerson died of liver disease in 1960… Here’s to you Hope Emerson-and your bigger-than-life acting style!-Love Joey 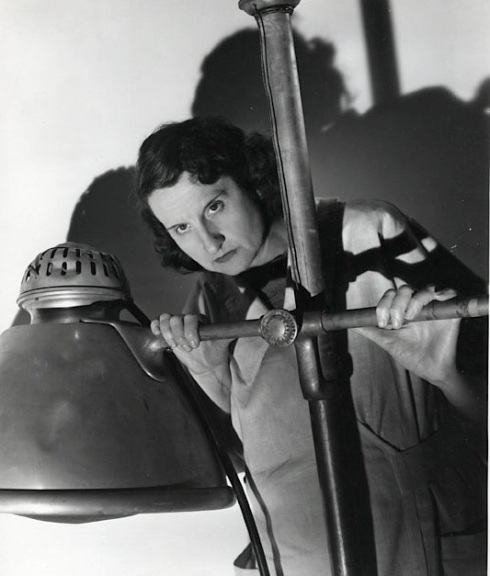 PS: Cry of the City is perhaps one of my new favorite film noirs in Siodmak’s collection. I’m going to have to cover it, because of the great acting, from the entire cast-small parts even for Shelley Winters to the gritty dialogue and sensational cinematography so stay tuned!- Your ever lovin’ MonsterGirl in the city!