A MASTERPIECE OF SCIENCE FICTION OPERA, FREUD’S id AND SHAKESPEARE’S THE TEMPEST – IN SPACE.

Earthmen on a fabulous, peril-journey into outer space!

A month after Invasion of the Body Snatchers was released, 12 years before the studio wowed audiences with it’s mesmerizing, complex production of 2001: A Space Odyssey, MGM released their spectacular, colorful, big budget science fiction space Opera – Forbidden Planet. Replacing the threat of an alien intruder seeking to take over our minds, the enemy WAS our mind and it’s potential to manifest a subconscious monster- a cartoon animated monster from the id. Perhaps a variation of Stevenson’s horror of duality, Jekyll and Hyde set in a futuristic milieu – on another planet.

Recognizing this theme, Walter Pidgeon’s character Morbius emphasizes the duality that exists within his nature. Behind the facade of the rational mind prowls the primitive instincts and desires, now incarnate right from it’s source – Freud’s id. Morbius is in denial that he has in fact manifested the monster himself. It’s an allegory of insatiable ego, internal agony and torment and perhaps incestuous jealousy. A collection of his suppressed rage hidden behind the outwardly rational scientific mind. 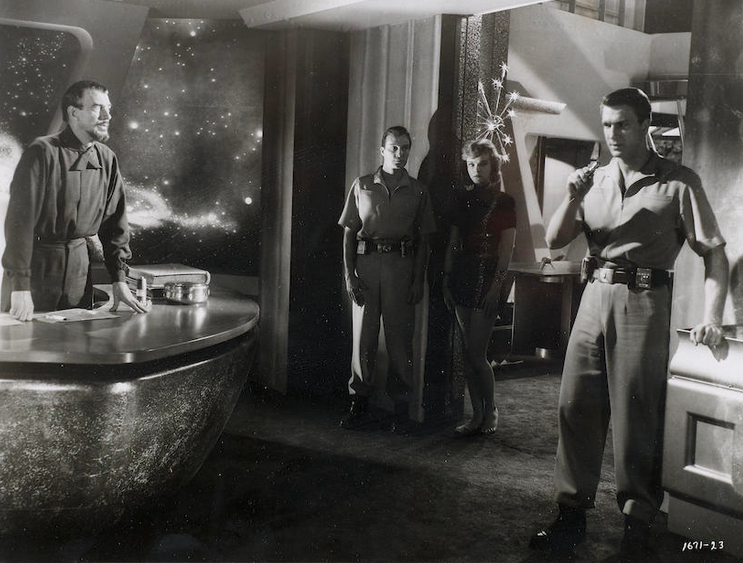 Shakespeare informs Prospero  – “this thing of darkness I acknowledge mine.”  Morbius is the true villain in Forbidden Planet, embodied by a power, intensified a thousand percent from the ancient science of the exinct Krell, who brought into existence their nightmares, ultimately proving to be the end of them.

And John Dykstra who did the FX on Star Wars comments – “It was a serious attempt to represent a completely unique world… it’s gotta be a world that nobody knows and at the same time everyone recognizes as being alien.”

Forbiden Planet is an allegory of technological power and mortal arrogance.

After years from its initial release Forbidden Planet finally reached its cult following, and is considered the Star Wars of the 1950s with its flamboyant color scheme, Wide Screen presentation, indelible visual effects and endearingly kitsch touches. Only one other dazzling post-war science fiction space Opera of the 1950s comes to mind -Joseph M. Newman and an uncredited Jack Arnold’s This Island Earth 1955  nears Forbidden Planet’s exhilarating yet a bit tacky tone.

Historian Carlos Clarens has remarked that Forbidden Planet is “a rare flight of fancy by the earthbound MGM – it resuscitates the classical elements of the horror movie, with ultra modern decor.”

Seth Lerer from his article Forbidden Planet and the Terrors of Philology -called it “Esteemed science fiction film, a blend of high cultural allusion and high camp effects.”

Aside from ‘The sensuousness of the color’ (Carlos Clarens An Illustrated History of the Horror Film and Science Fiction)–or the sensorial experience brought about by the lush colors, my heart used to pump and pound (and still does), when as a kid I’d await the scene where the fiery id materializes. It emerges menacing, startling, causing a delighful jolt of fear and I was thrilled to see It’s sparking outline ambushed in the force field. This iconic scene is one of the contributing joys that gave me an appetite for classical science fiction, fantasy and horror in my childhood.

Forbidden Planet was directed by Fred McLeod Wilcox with a screenplay by Cyril Hume who adapted his script from an original story by Allen Adler & Irving Block. So much has been written on how they presumably modeled the film after the fatalistic comic allegory – William Shakespeare’s The Tempest. (uncredited).