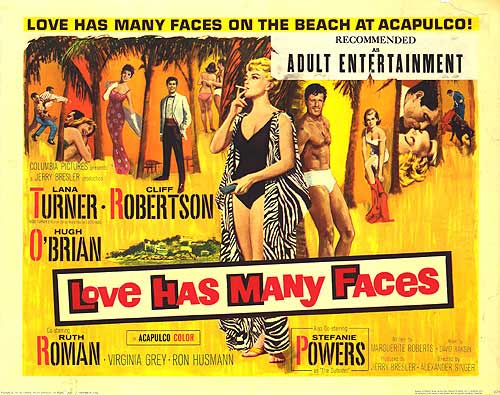 Hugh O’Brian as the smarmy Hank Walker–“Haven’t I seen you around?”

Ruth Roman as the tough as nails Margot Eliot– “It’s possible. I’ve been there.”

Director Alexander Singer’s  melodrama (Singer’s Psyche 59 (1964) starring Patricia Neal who suffers from hysterical blindness, has a much more compelling frenetic slick psychology) Love Has Many Faces comes off as a meandering soap opera in balmy Acapulco Mexico… as Lana Turner plays Kit Jordan a millionairess who marries Cliff Robertson a self loathing malcontent who sold all 8 pints of his blood to be owned by her. Though her love is as ‘thin as ice…’

Enrique Lucero is marvelous as Lieutenant Riccardo Andrade a Mexican Columbo who is trying to get to the bottom of one of Lana’s young male lovers who apparently committed suicide over their break up.

… I was struck by two things…

Beside the high melodrama… 1) Hugh O’Brian is a beach bum gigolo who spends the entire movie, well mostly… baring his sweaty hairy virile chest and 2) Lana Turner changes wardrobe more than there are cigarettes and cocktails in the picture… Wow that’s a lot of sexy beach wear and lamé, bare shoulders, back and leg… Lana! Thanks to Edith Head… you do look fabulous!

I’ll see you around… I’ve been there too! Cheers Joey