Disembodied screams, rattling chains and ghoulish groans amidst creaking doors- all a delicious mixture of frightful sounds that emanate from a jet black screen.

The marvelously dashing face of Vincent Price or for the film’s purposes, Frederick Loren’s head sporting a plucky mustache and highbrow tone introduces himself in front of the imposing Modern-Ancient structure– 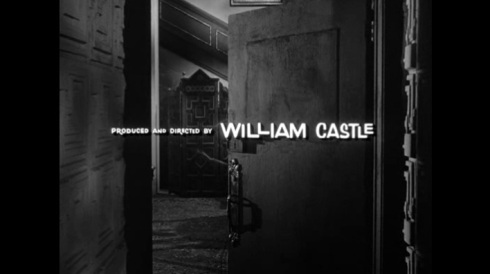 Von Dexter’s music, a mixture of solemn strings, a sustained and queasy Hammond organ & Theremin greet us with an eerie funeral dirge while the shiny black gimmicky funeral cars pull up in front the quite sinister post modern structure.

And this is just the opening fanfare of William Castle classic House on Haunted Hill! 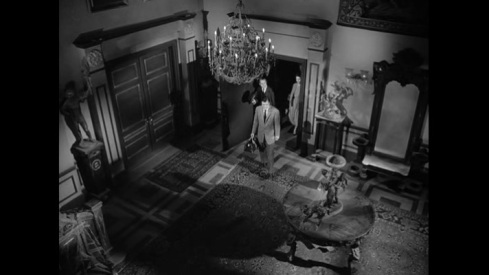 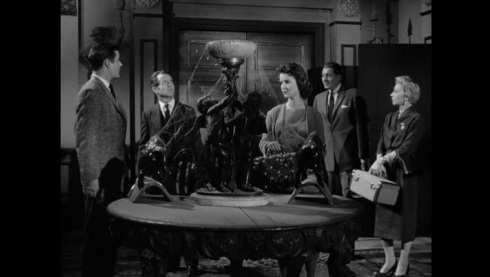 One of William Castle’s most beloved low budget, fun-house fright ride through classical B movie horror and exquisitely campy performances. Distributed by Allied Artists and written by Robb White who also did the screenplay for Castle’s Macabre 1958, The Tingler 1959 13 Ghosts 1960 & Homicidal 1961.

White’s story is quirky and wonderfully macabre as it works at a jolting pace delivering some of the most memorable moments of offbeat suspense in this classic B&W B-Horror morsel from the 50s!

The success of the film inspired Alfred Hitchcock to go out and make his own low budget horror picture- Psycho 1960.

Much of the style and atmosphere can be attributed to the unorthodox detail by art director Dave Milton and set designer Morris Hoffman. The exterior of the house is actually The Ennis Brown House in Los Angeles, designed by Frank Lloyd Wright, built in 1924, now listed on the National Register of Historic Places.

There’s a pervasive sense of dread in House on Haunted Hill, that makes the house itself a ‘spook.’
Whether the house is haunted or not, it’s forbidding presence tells us that it just doesn’t matter. The history of the house itself, it’s violent past is enough to give one chills. While not in the classic sense like that of Robert Wise’s diseased and imposing Hill House, William Castle does a fabulous job of inventing a parameter to tell a very cheeky and pleasurable little scare story. As David J Skal puts it succinctly “The real, if unintentional spook in House on Haunted Hill is postwar affluence.”

The narrative is fueled by the creepy atmosphere of the house itself. Not using a claustrophobic Old Dark House trope but rather a modern Gothic construction that swallows you up with odd motifs and a sense of malignancy within the fortress walls. The starkness of the wine cellar and it’s empty miniscule dark grey rooms with sliding panels is almost more creepy than black shadowy corners with cob webs and clutter. Director of photography Carl E Guthrie  (Caged 1950) offers some stunning and odd perspective camera angles and low lighting which aide in the disjointed feeling of the sinister house’s magnetism.

The constant explorations into the viscera of the house by the guests is almost as titillating as the criminal set-up and conspiracy that is afoot propelled by Von Dexter’s tantalizingly eerie musical score with deep piano notes and eerie wispy soprano glossolalia.

House on Haunted Hill works wonderfully, partly due to the presence of the urbane master of chills and thrills, the great Vincent Price who plays millionaire playboy Frederick Loren. Vincent Price was a versatile actor who should not be pigeon holed as merely a titan of terror, given his too numerous layered performances in great films like Otto Preminger’s Laura ’44, Joseph L. Mankiewicz’s Dragonwyck ’46 etc. Vincent Price did however make his mark on the horror genre with House on Haunted Hill. The New York Herald-Tribune praised Price’s performance as having “waggish style and bon-vivant skepticism.”

As David J Skal puts it in his, The Monster Show {Vincent Price} “Could bring an arch elegance to the most insipid goings-on…“

The omnipresent Elisha Cook Jr. is superb as Watson Pritchard, the neurotic sot who is riddled with fear, spouting anecdotes about the house’s grisly history.

I adore Elisha Cook, from his cameo in Rosemary’s Baby, his performance as George Peatty in Kubrick masterpiece The Killing ’56 to his very uniquely intense role as Cliff the sexually jazzed up drummer in Phantom Lady ’44.

The strikingly beautiful Carol Ohmart plays Loren’s treacherously seductive wife Annabelle who is sick of her husband’s irrational jealousy. Has she already tried to poison him once but failed? The story alludes to as much. Annabelle wouldn’t be happy with a million dollar divorce settlement, she wants ALL her husbands money! Annabelle is Loren’s fourth wife, the first wife simply disappeared.