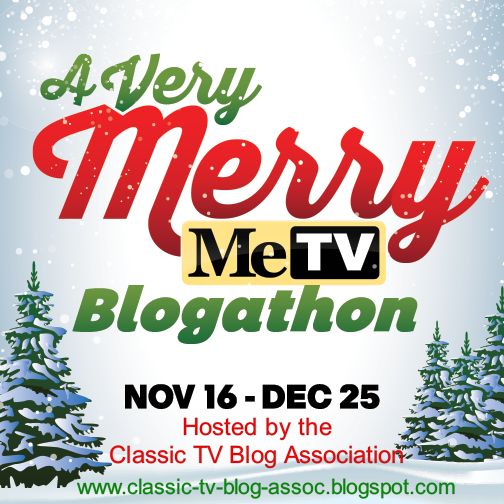 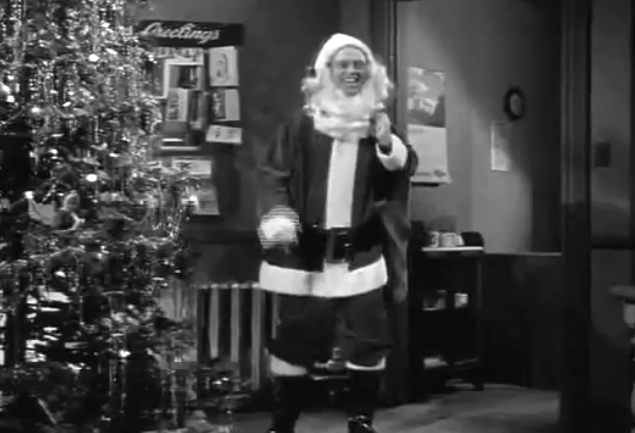 On the eve of Christmas when Andy and Barney are planning on celebrating Christmas with Aunt Bea, Opie and Ellie, Andy is setting his mind to allowing both cells full of prisoners who were disturbing the peace (the basic holiday drunkeness) to go home for Christmas!

Andy’s sweeping up and apologizing to the prisoners about there being the only kind of pillows they got for the cells. Often Andy’s jail seems as homey and welcoming as most towns people’s homes. What with Aunt Bea’s hand made Doilies and bringing supper consisting of chicken and dumplings, sweet potato pie, johnny cakes, (no worries –not those bad ole home pickles– them kerosene cucumbers! They’re scattered all the way from Seattle to Nova Scotia) At the jailhouse there’s always breakfast, lunch and dinner, and it’s always a feast for either wayward prisoner, or Otis sleeping off a snoot full…. 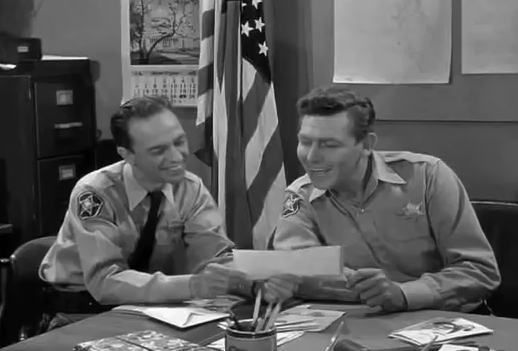 Barney comes in in a particularly jovial mood with a package of Christmas cards. More people seem to remember them this year than any other!

And boy Andy does love to get and open up Christmas cards more than anything he knows of.

Barney opens up a card from the Hubacher Brothers.

Just a note: We rescued 3 little feral tabby kittens last year. Of course we named them the Eubacher brothers. Sadly we lost Mikey to a horrible virus a few months later, but Archie and Sidney are doing well! And whenever the show mentions those Hubacher brothers, it tickles us thoroughly.

Andy asks where they are right now. Barney matter of factly answers,  “Up in State Prison.”
Andy enjoyed the picture they sent last year more. It was more “outdoorsy and Christmasy feeling” Barney tells him, “They was all working out on the County Road then.”

“Merry Christmas from State Prison” Barney smiles “I think it’s just wonderful that they’re all together on Christmas.” Then Andy finds one for Barney marked personal. You know he’s about to poke fun at him royally about either Hilda May or later on in the show it will be… the unseen Jaunita over at The Blue Bird Diner.

Barney reads the card and giggles to himself. “That’s sweet.” When he realizes that Andy is watching him he quickly shoves it in his pocket, looking like a boy caught with his hand in the cookie jar.

Andy answers the phone all toothy and grinning. Aunt Bea is on the phone. “Oh Hey Aunt Bea Yeah, I got the doodads for the tree…” He tells her he doesn’t want to be Santa Claus again this year. “I was last year….”

Andy is so excited about the Christmas Party, and he tells Barney that he’s gonna be Santa Claus this time, but Barney says no… because he isn’t gonna be there since he’s going to be on duty minding the prisoners in the cells.

Andy says “Oh yeah, well that does make a problem then don’t it” Barney tells him… “You know with a little practice I could have done a very mean Ho Ho Ho Merry Christmas!” 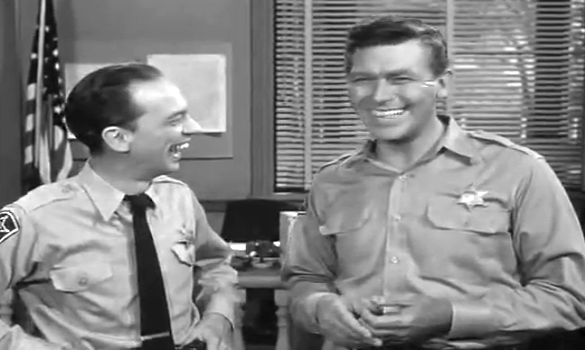 Andy is figuring on what he has them boys in the cells for anyways. Barney thinks he means what law infractions. Like disturbing the peace. But that’s not what Andy is driving at. “We got em in there to kind a teach them a lesson, ain’t that right?” Barney reluctantly goes along at first. In one of Andy’s crafty rationals he figures that it makes the prisoners sort of like students, making he and Barney teachers and the jail house sort of like school! So when it’s a holiday what else can you do…?

Only one thing to do, right! Let all them students go home for Christmas!

Acting in this Christmas play is the modern day Ebenezer Scrooge, the crotchety department store owner Ben Weaver (Will Wright) who’s ill-tempered swagger injects his mean spirited humbuggery into the gaiety around the prison.

Weaver barges into the jail like a grizzled old bounty hunter with Sam Muggins (Sam Edwards) gripped in one hand and a jug of hard cider in the other. 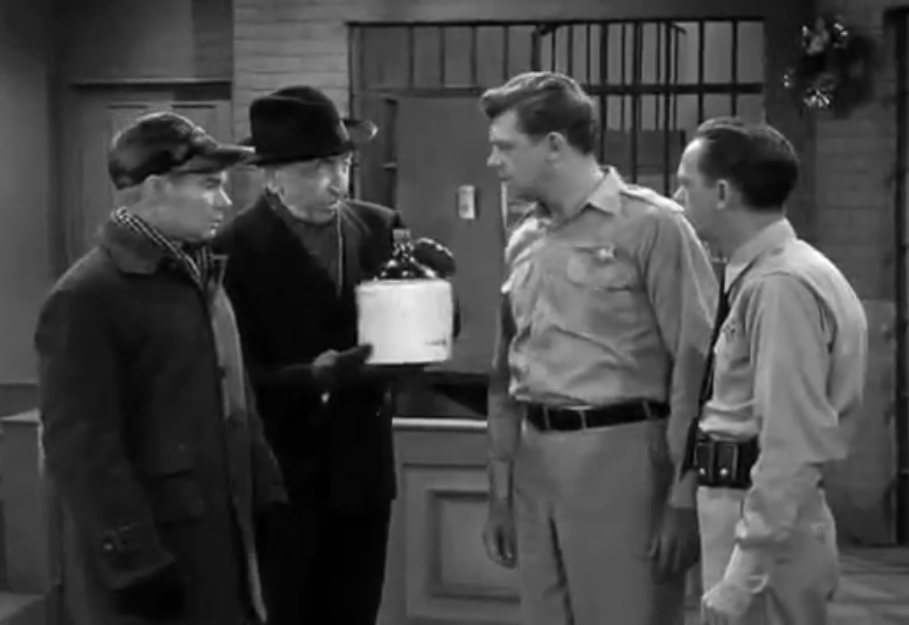 Weaver, the miserly, curmudgeon wants Sheriff Taylor to arrest Sam for moon-shining and lock him up in a cell on Christmas Eve! That man has got all the meanness in town…

Weaver’s caught Sam red handed and shows him the jug as evidence. Andy takes a sniff and his eyes roll back in his head. “Well I’ll have to admit… it ain’t exactly Sarsaparilla.”

Andy pleads his case to Weaver… Sam Muggins really only just made “a batch, to merry up Christmas… Ben”– “Now you heard me Sheriff lock him up!” urging Andy to do his duty. Andy tries to convince Ben Weaver that Sam didn’t make the spirits to try to sell and after all, tomorrow being Christmas, and Sam being a family man Christmas being a family holiday.

Andy- “If that ain’t the meanest, orneriest, low-downiest man” Andy apologizes and puts Sam in the cell. Poor Sam feels so bad about spending Christmas in a cell without his family and his youngins having to spend Christmas without their Pappy.

Andy tries to reason with the miserly Weaver, “I was just wondering if…” Ben snaps at Andy- No sir! I’d like to see how forgiving you’d be, if you had a store that sold spirits and half the county was cutting in on your sale by making their own. Agin the law!”

Ben tells him he’s gonna keep an eye on him. Andy gives his word that right after Christmas he’ll arrest him and try him strictly according to the law. “And if this here moon-shiner ain’t in that cell every minute of the time, I’m gonna report you to the state officials for being derelict in your duty. and you know I’ve got enough pull up there to make it stick.”

Barney has the notion and asks Andy if they can’t just dismiss school again… He’s worried that Ben could actually make a whole lotta trouble. Barney was sure looking forward to playing Santa Claus he starts to sing Jingle Bells to himself. Andy gets that grin on his face like he’s got another one of those shrewd ideas! “No by dog there’s more than one way to pluck a buzzard. Yes Sir!!!!”

Ben sees Andy bringing the whole Muggins family in the police car. Jingle Bells is playing as he escorts the family out of the car and into the jailhouse.

In Andy’s witty, wise and resourceful manner he often figures out ways around the befuddlements of human nature, and so to appease mean old Weaver he arrests Sam’s entire family, wife Bess (Joy Ellison) and even toothless little Effie (Margaret Kerry) and little Billy.

Andy sees this as a way the Muggins family can celebrate their Christmas all together. So with his home spun cunning and wit, charges Effie and the children as “accessories before, during, and after the fact.”

Andy engages Eleanor and Aunt Bea to help watch over the prisoners Muggins. And of course they need to eat, so the party festivities are re-directed to the jailhouse. The feast and all the fixings are brought there. Even the beautifully festooned Christmas Tree is now at the jail ready to be decorated with tinsel, fringe and ball lights. The festivities continue, lots of roast turkey and egg nog, Andy on the guitar and caroling and the warmth of friendship and kindness abounds.

Weaver’s face appears as if soaked in vinegar as he watches from outside the jailhouse window, a sad lonely man. The old coot becomes embittered while everyone else is full of the joy of Christmas. Weaver does everything he can to get himself arrested. Secretly wanting to be a part of the celebration but soaked in too much pride and cantankerousness to admit he’s lonely.

Yes Andy’s jail is good enough to host Christmas, with all it’s warmly decorated, folksy Christmas singin’ and carols, good home cookin’ (kerosene pickles aside) and hearty atmosphere of good will to all…

But Ben Weaver the old curmudgeon doesn’t think so. He’s got no holiday spirit in his creaky old body draped in black like the harbinger of doom who Andy refers to as ‘instead of dying’ — “He’s just going to nasty away.” Bony fingers and hawk like nose Ben Weaver would be a marvelous Ichabod Crane…

Ben Weaver blows his stack when Sam Muggins gets to put his own little Christmas Tree in his cell. “It’s disgraceful that’s what it is… disgraceful a prison is for punishing not for picnicking”  Andy responds- “Now I always thought that a prison was to help wrong doers get back on the path.”  For Ben Weaver tis definitely NOT the season to be jolly.

Andy finally figures out Ben Weaver’s unruly behavior and arrests him so he can be part of the Christmas celebrating! Ben brings his heavy suitcase in, but it’s not filled with his personal items, it’s loaded down with presents for everyone, even toys for the children from his department store. He cleverly pretends that he has no idea how these things have gotten in his suit case, handing out the gifts as if he’s got no use for them himself. Guess he’s got a secret kind spot in his his gnarled looking heart after-all…

Barney gets to play Santa Claus and all is right with the world– Mayberry style….

From all of us here at The Last Drive In… we’re wishing you and yours a very Happy Holiday and Peace on Earth…. ☼