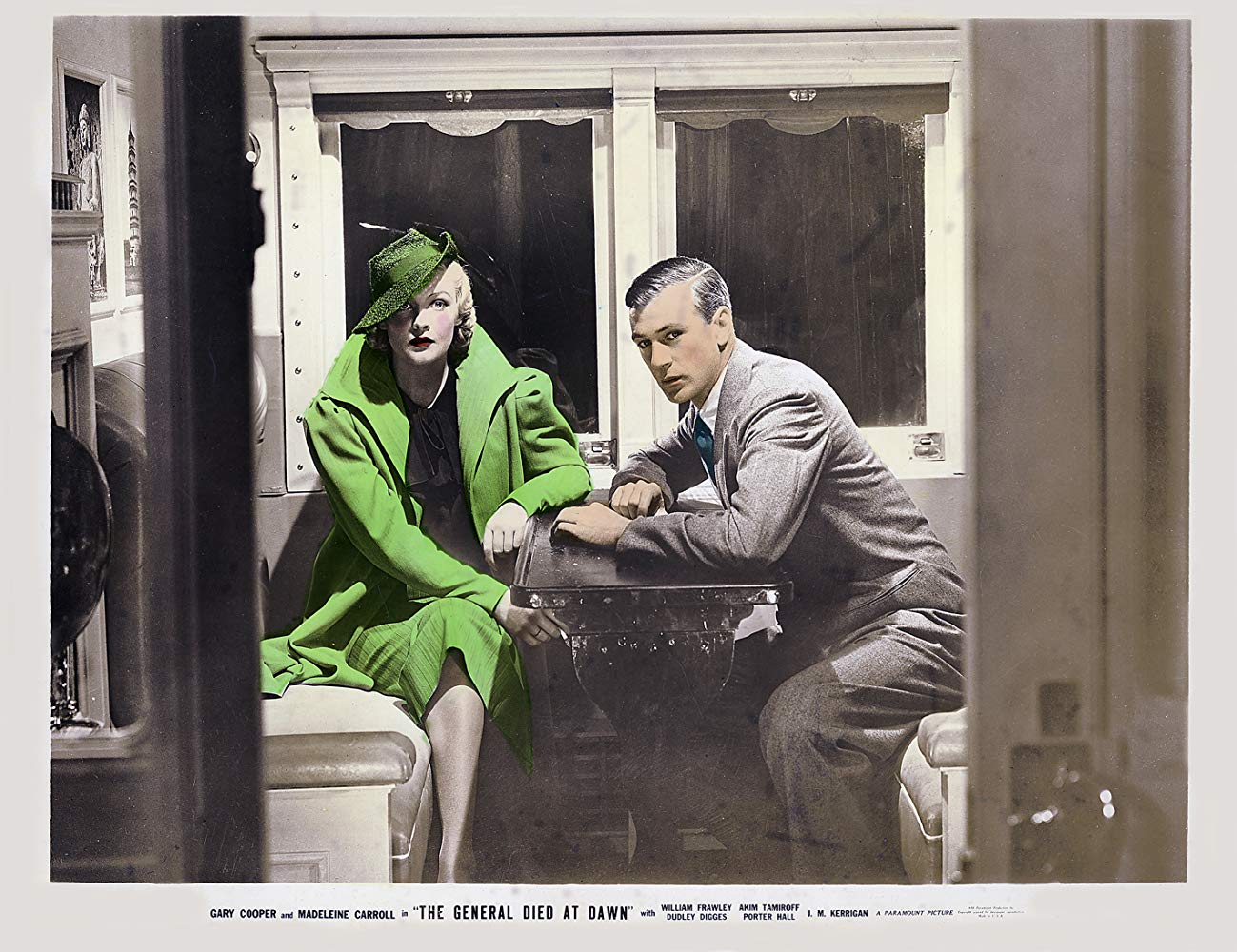 Amid the anarchy of China, an American mercenary tangles with a ruthless warlord. Directed by Lewis Milestone with a screenplay by Clifford Odets. Stars Gary Cooper, Madeleine Carroll, Akim Tamiroff

O’Hara: (Gary Cooper) I like people too much to shoot. But it’s a dark year and a hard night.

Judy Perrie: (Madeleine Carroll) Maybe some day there’ll be a law to abolish the blues. Something big, like an amendment to the Constitution. For all of us. 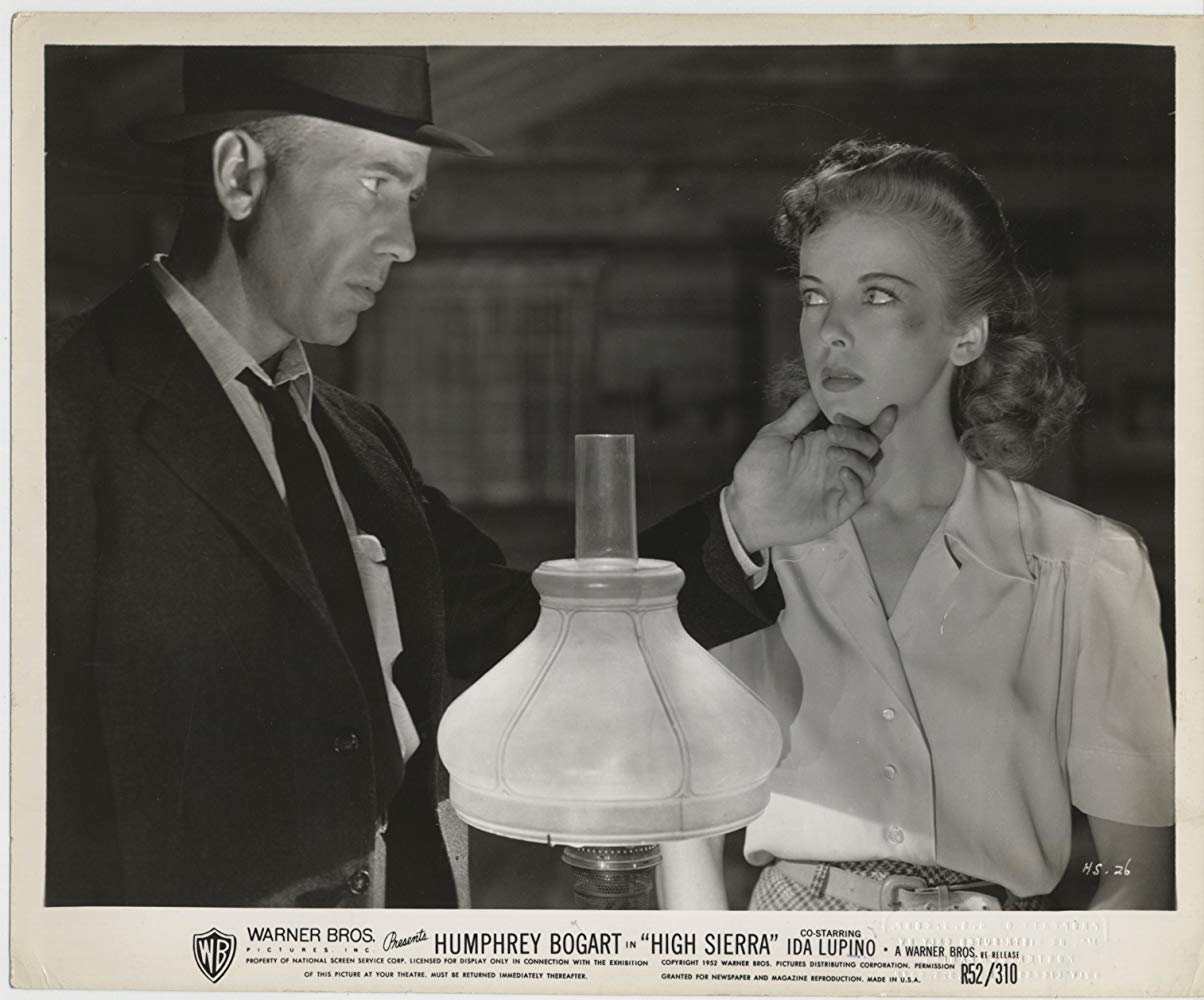 After being released from prison, notorious thief Roy Earle is hired by his old boss to help a group of inexperienced criminals plan and carry out the robbery of a California resort.

Roy Earle: (Humphrey Bogart) I wouldn’t give you two cents for a dame without a temper.

Marie Garson: (Ida Lupino) Yeah, I get it, ‘ya always sorta hope ‘ya can get out, it keeps ‘ya going. 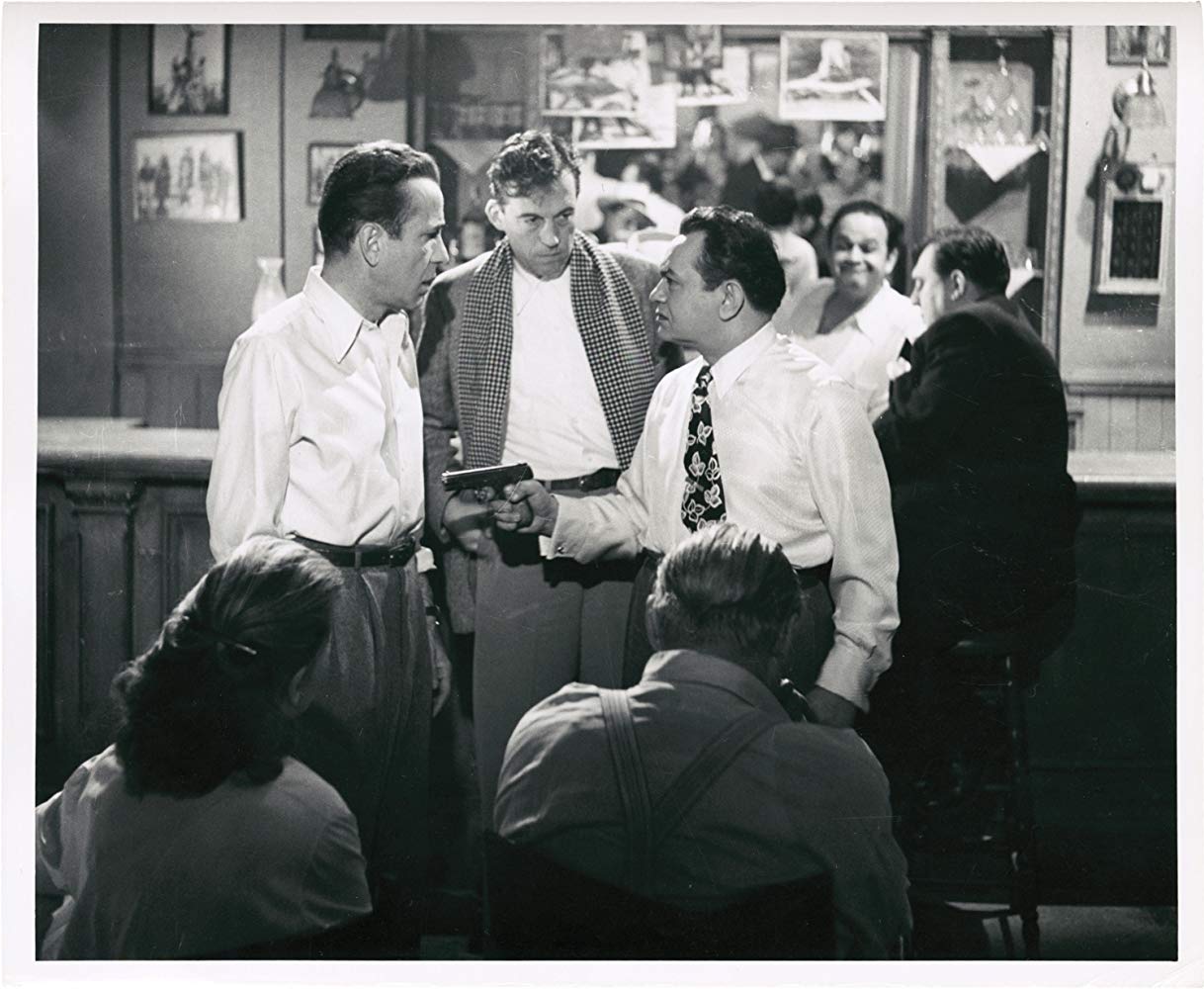 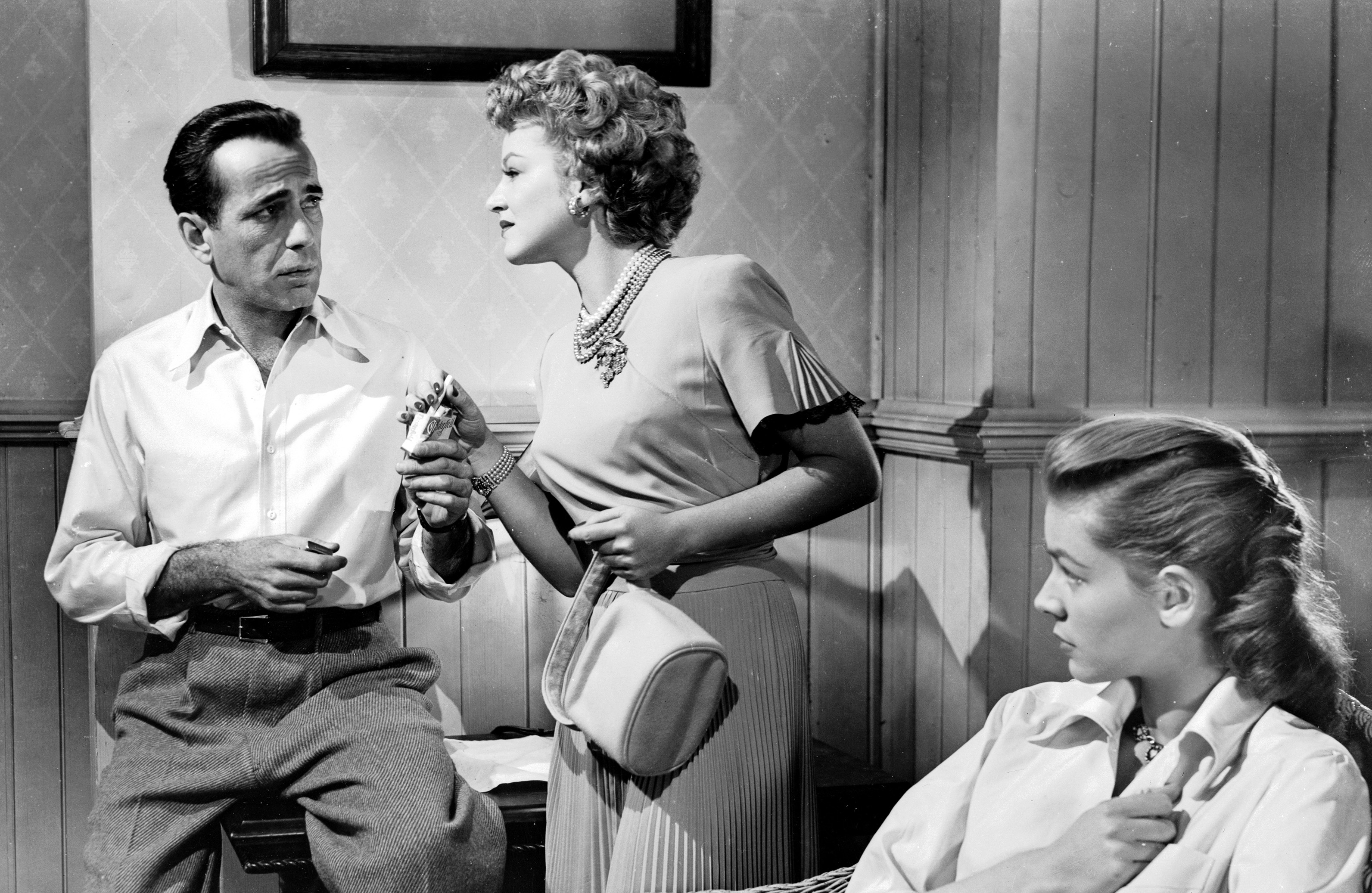 Frank McCloud (Humphrey Bogart) visits his war buddy’s family hotel run by Lionel Barrymore and his daughter Lauren Bacall and finds a gangster (Edward G. Robinson) running things. As a hurricane approaches, the two end up confronting each other. Claire Trevor turns in a brilliant performance as washed up torch singer Gaye Dawn.

Frank McCloud: (Humphrey Bogart) You don’t like it, do you Rocco, the storm? Show it your gun, why don’t you? If it doesn’t stop, shoot it.

Gaye Dawn: (Claire Trevor) No, Mr. Temple, it wasn’t you. It wasn’t the law or anybody. It was only Johnny Rocco. Nobody in the whole world is safe as long as he’s alive. 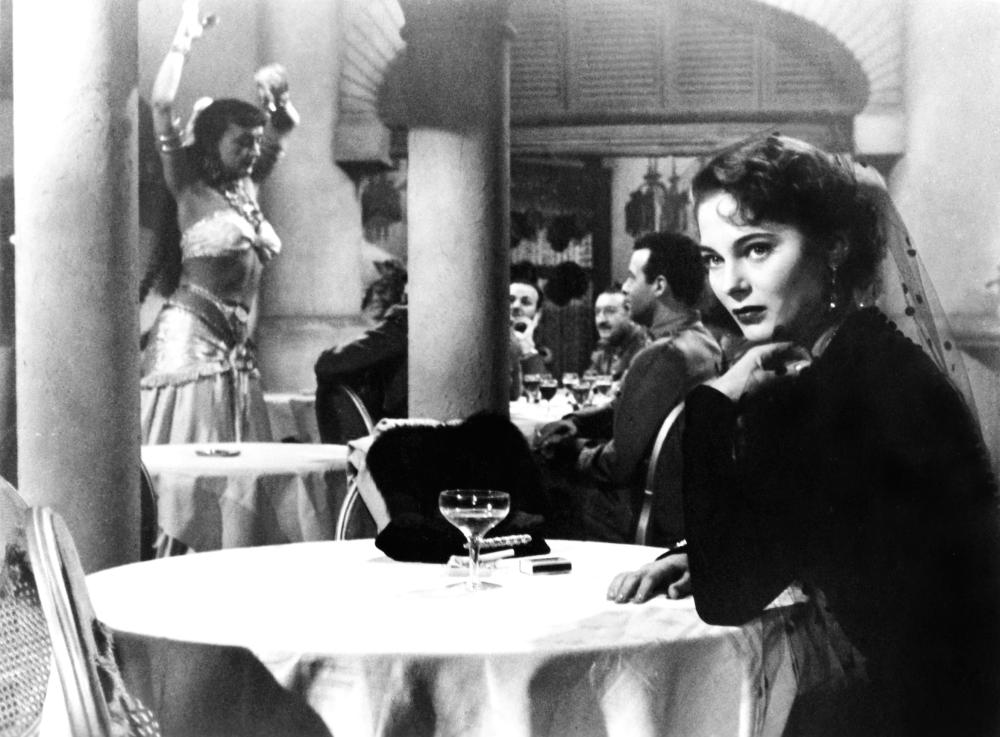 A cynical American expatriate gets involved in smuggling and gun-running for the rebels during the 1925 Syrian insurgency against French occupation. Directed by Curtis Bernhardt. Stars Humphrey Bogart, Lee J. Cobb, Everett Sloane and Märta Torén

Violette: (Märta Torén)  I want to tell you why I came.

Harry Smith: (Humphrey Bogart) Whatever it is, it will look better through the bottom of this glass.

Violette: (Märta Torén) What a man! You’re so ugly! Yes, you are! How can a man so ugly be so handsome? 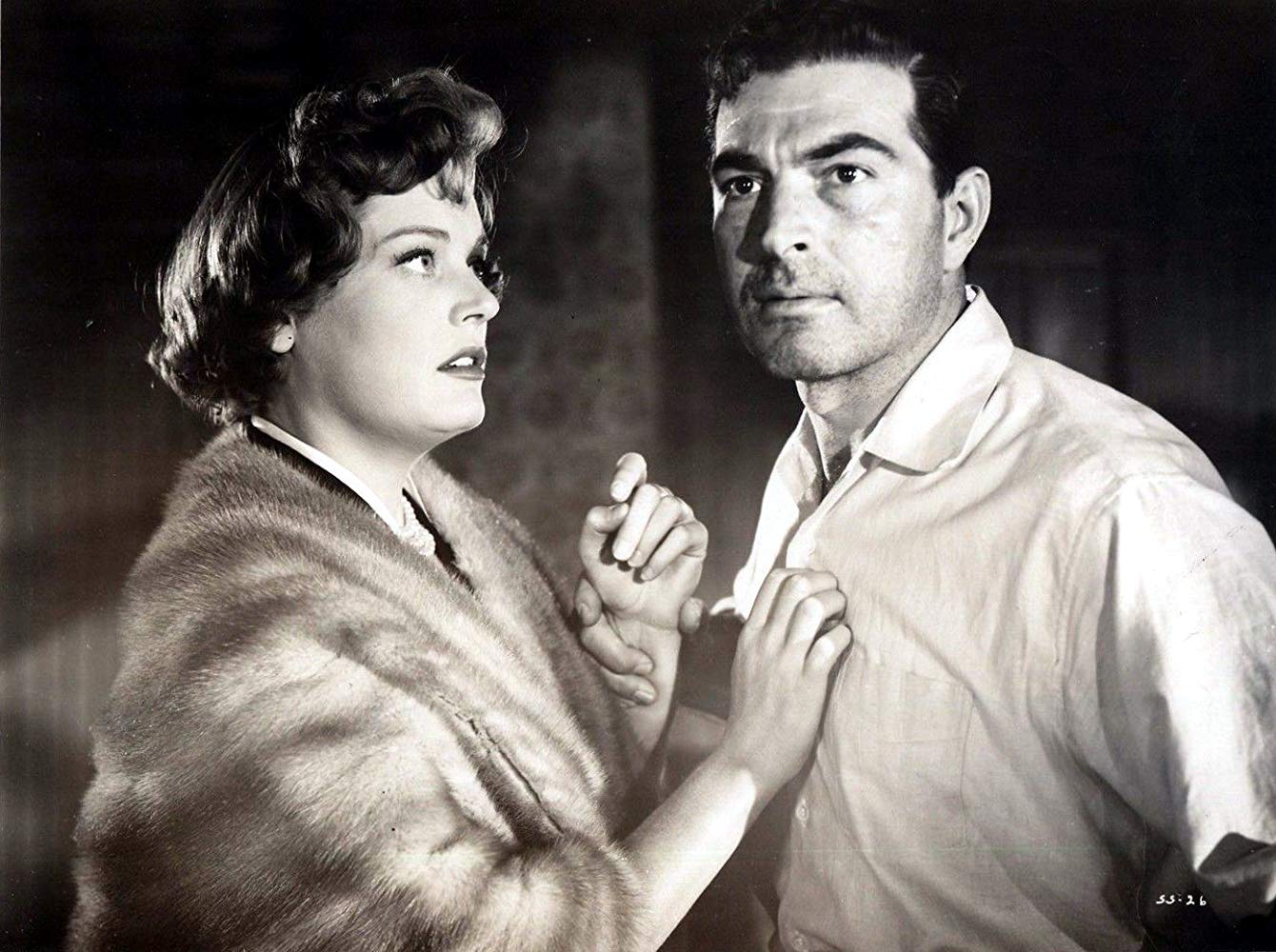 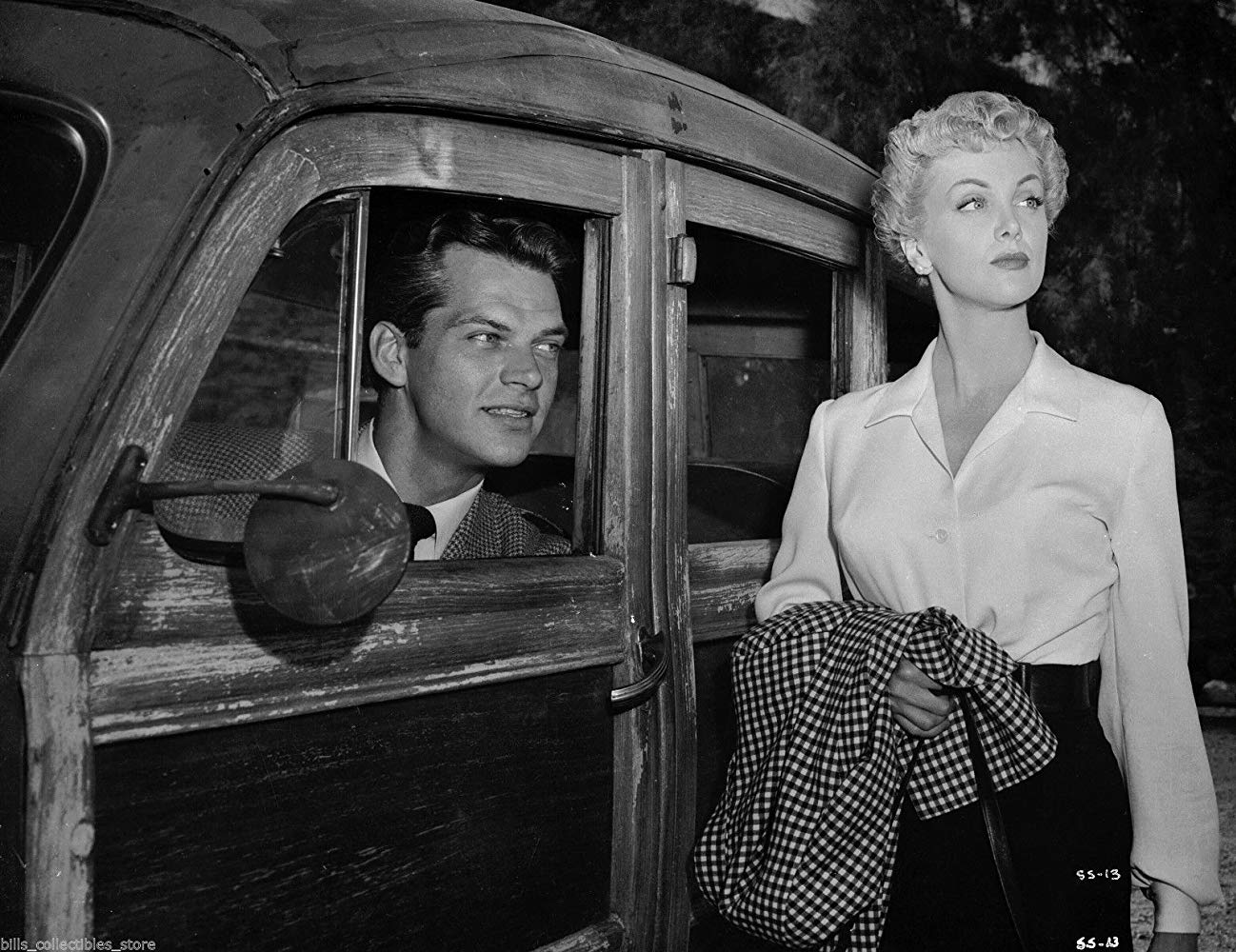 Two escaped killers take hostages and hide in a Nevada mining ghost town knowing that an atom bomb is scheduled to be tested there the next morning. Directed by Dick Powell. Stars Stephen McNally, Alexis Smith Keith Andes and Jan Sterling.

Sam Hurley: (Stephen McNally) You ever been locked up?

Kay Garven: (Alexis Smith) Not the way you mean.

Sam Hurley: (Stephen McNally) I don’t care what way it is. Some people can stand it and some people can’t. The ones who can’t would kill themselves and anybody else just to get out for five minutes.

Dorothy ‘Dottie’ Vail: (Jan Sterling) Mother used up all the men we knew. 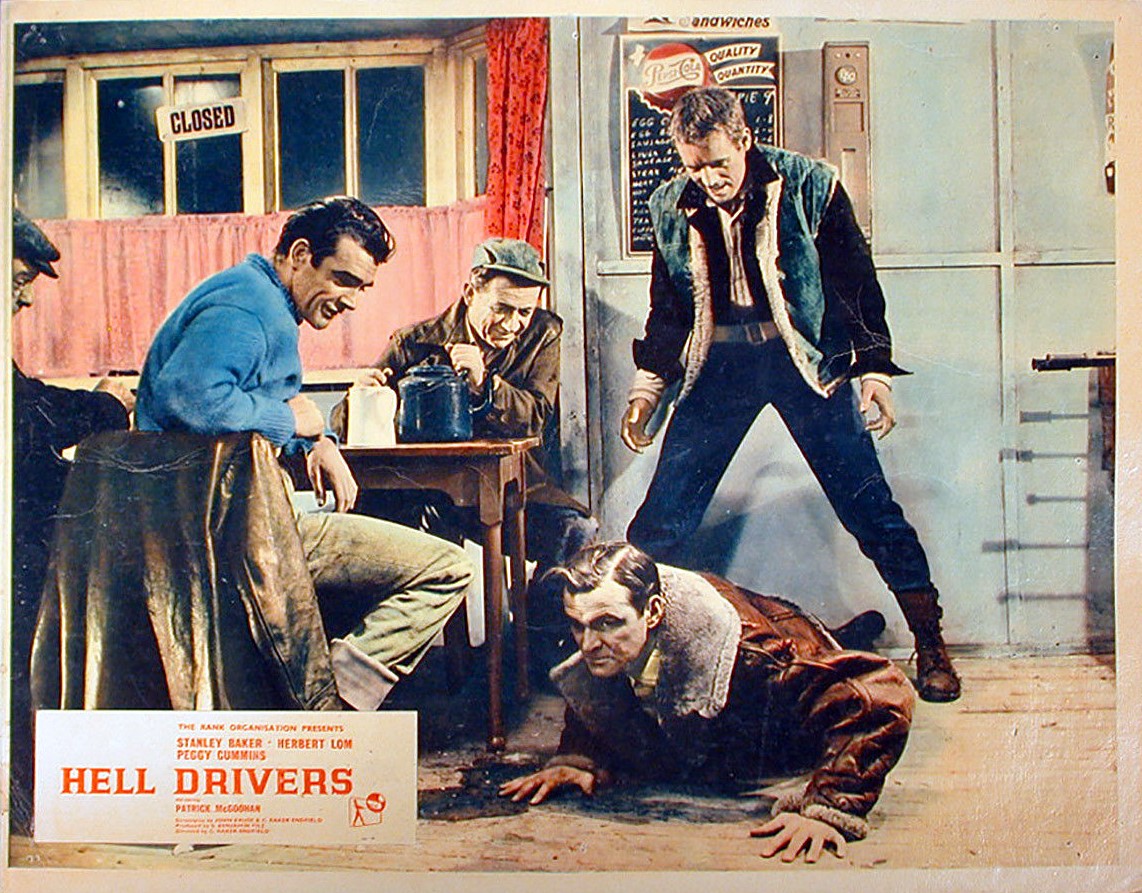 C. ‘Red’ Redman, Foreman: (Patrick McGoohan)  I don’t like yer’ attitude. You’ve got a chip on your shoulder.

C. ‘Red’ Redman, Foreman: (Patrick McGoohan) An’ if I was to knock it off, your head might go with it.

Tom Yately: (Stanley Baker) Well, I’m the last man to want to walk around without a head.

This is your EverLovin’ Joey Sayin’ it’s one of those keep your down head low when that lead starts flyin’ kind of Fridays!

The seductive Andrea King was born France Georgette André Barry on February 1st, 1919 in Paris, before her mother relocated them to the United States.

Eventually she settled in Queens, NY. King eventually found her way to Broadway at the age of 13 where she performed between 1935-36 in Fly Away Home with Montgomery Clift. At the age of 18 she went to Chicago and worked in the Lilian Gish company’s Life with Father for two years.  It was in 1944, that Warner Bros. signed Andrea King to a contract, her first bit part was as a nurse in a scene with Bette Davis in Mr. Skeffington, then she appeared in The Very Thought of You where as Molly Wheeler – she had to be bitchy to Eleanor Parker, which she joked she hated doing “Wait a couple of months baby and you’ll be making double dates with me just like we used to!” King was cast in small roles during the war. The Warner Bros. studio photographers voted Andrea the most photogenic actress on the lot for the year 1945, the year she starred in God is My Co-Pilot. Jack Warner who liked to name his new stars had wanted to change her name to Georgia King to Andrea’s horror she ran to friend director Delmer Daves and cried telling him it was awful, and sounded like a Mississippi burlesque queen! 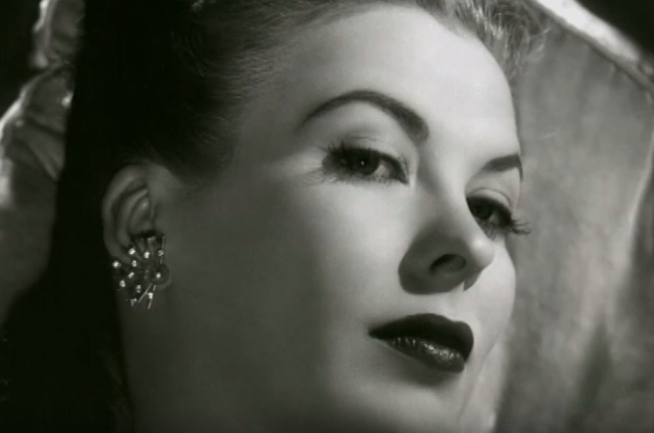 Andrea King’s portrayal of the angelic and strong minded Julie Holden in director Robert Florey’s Gothic horror The Beast with Five Fingers (1946) was perhaps my introduction to King’s beautiful persona. Co-starring with Robert Alda a year before they were to act together in The Man I Love (1947).

Sophie Rosenstein the acting coach had taken a strong liking to Andrea and when she left Warner Bros. and went to Universal, a lot of roles opened up for Andrea at Universal.

Andrea King’s first major role as Lisa Dorn whom Andrea in an interview with TCM said was a wonderful part, a real leading lady– “She was evil and she was kind. She was two people all in one” in Hotel Berlin (1945) afterwards she played stylish often ‘mysterious’ leading ladies or supporting roles as the ‘bad girl.’

Finally King got bigger, glamorous lead parts and appeared in a cross section of genres throughout the late 1940s and 1950s. She is remembered for five significant film noir roles, Shadow of a Woman (1946), The Man I Love (1947) with the legendary Ida Lupino, Ride the Pink Horse (1947) starring and directed by Robert Montgomery, Dial 1119 (1950) with Marshall Thompson and the even lesser known Southside 1-1000 (1950) with Don DeFore, that I decided not to cover at this time. 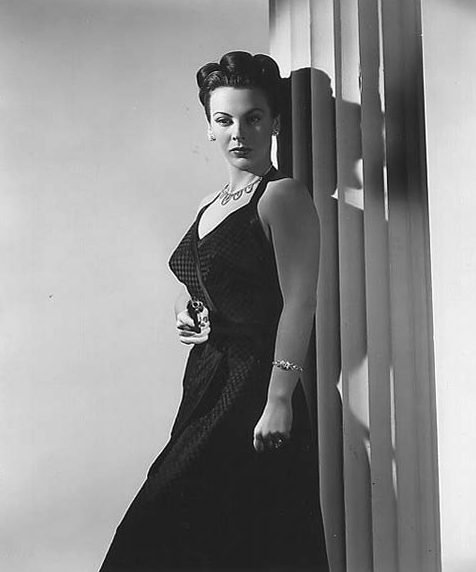 In the 1965 she appeared in The House of the Black Death, Prescription Murder (1968) tv movie and Daddy’s Gone A -Hunting 1969. Andrea King made the transition to television, most notably she appeared in the original 1953 broadcast of “Witness for the Prosecution” for Lux Video Theatre (1950) co-starring Edward G. Robinson. She worked well into the 1970s, (appearing in genres- horror & exploitation- where so many beautiful starlets inevitably roam-a subject I plan on writing about extensively in my piece “From Glamour to Trauma: Deconstructing the Myth of Hag Cinema in the not so distant future here at The Last Drive In) including appearing in the exploitation film Blackenstein 1973.