“I was born a character actor. I was never really a leading man type.” –Burgess Meredith

WHAT A CHARACTER! BLOGATHON 2014

It’s here again! The most fabulous blogathon honoring those unsung stars that add that certain singular glimmer to either the cinematic sphere or the small screen sky–The character actors we’ve grown to love and follow adoringly. Thanks so much to Aurora at Once Upon A Screen, Outspoken & Freckled and Paula’s Cinema Club  for hosting such a marvelous tribute once again!

This post’s title comes from the opening narrative for Rod Serling’s favorite Twilight Zone episode “Time Enough At Last.”  ‘Witness Mr. Henry Bemis, a charter member in the fraternity of dreamers’ From Season 1 episode 8 which aired on November 20th 1959.

Directed by John Brahm, “Time Enough At Last” tells the story of a little bespectacled bibliophile bank teller named Henry Bemis ,a bookworm, a slave to the iron fisted hand of time and all it’s dreary inescapable obligatory scars and yearnings.

Browbeaten by his wife, boss and even the public at large who see him as an outcast because of his ravenous appetite to read books! Henry can’t even sneak away to read a newspaper during work hours. He’s forced to resort to studying the labels on condiment bottles. She won’t even let him read the ketchup. His harpy of a wife Helen ( Jacqueline deWit) even blackens in the lines of his books at home, calling it “doggerel“– One day as fate would have it, he steals away to the basement vault of the bank to catch up on his beloved preoccupation, when –as many Twilight Zone episodes had been infused with a dose of Rod Serling’s nihilism (as much as there is his hopeful message), the feared 50’s bomb annihilates our vision of the world that was swarming just a few moments before. Suddenly poor Henry seems to be the last man on earth. But wait… perhaps not poor Henry.

As he stumbles through the debris and carefully placed set pieces– the remnants of man’s destructive force, Henry comes upon the city’s public library filled with BOOKS!!! Glorious books…

While he must struggle against the approaching loneliness of the bleak future ahead, he begins to see the possibility of a new world where he could dream, and wander through so many scrawled worlds. Already an outsider he could finally live a life free to be as his boss rebuked him, a “reader.’

Henry starts to amass various piles of selected readings. There was time now. Time enough at last to read every word on the written page without interruption, interference or judgement.

Yet…fate once again waves her fickle finger via The Twilight Zone and leaves bewildered Henry without his much needed glasses, now they have fallen on the great stone steps, crushed by Henry’s own feet. As with every role Meredith brings to life the character of Henry Bemis with so much mirth and pathos.

He’s always just a bit peculiar, idiosyncratic, eccentric, lyrical, salty, sometimes irascible, but always captivating and distinctive, His voice, his persona, his look, his style… Burgess Meredith could always play the Henry Bemises of the world and grab our hearts because he has that rare quality of being so damn genuine. 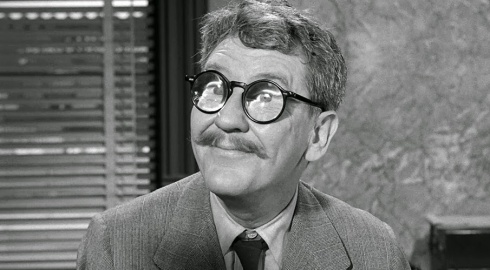 Let’s face it even when the prolific Burgess Meredith is playing a cackling penguin– nemesis to the caped crusader Batman or the devil himself (alias the dapper and eccentric Charles Chazen with Mortimer the canary and his black and white cat Jezebel in tow) in The Sentinel 1977 based on the novel by Jeffrey Konvitz and directed by Michael Winner–he’s lovable!

He always manages to just light me up. Ebullient, mischievous  and intellectually charming, a little impish, a dash of irresolute cynicism wavering between lyrical sentimentalism. He’s got this way of reaching in and grabbing the thinking person’s heart by the head and spinning it around in dazzling circles with his marvelously characteristic voice. A mellifluous tone which was used often to narrate throughout his career. (I smile even at the simplest nostalgic memory like his work on television commercials , as a kid growing up in the 60s and early 70s I fondly remember his voice for Skippy Peanut Butter. Meredith has a solicitous tone and whimsical, mirthful manner. Here’s a clip from a precious vintage commercial showcasing Meredith’s delightfully fleecy voice.

And his puckish demeanor hasn’t been missed considering he’s actually played Old Nick at least three times as I have counted. In The Sentinel 1977, The Twilight Zone and Torture Garden! While in Freddie Francis’ production he is the more carnivalesque Dr. Diabolo–a facsimile of the devil given the severely theatrical make-up, goatee and surrounding flames… he is far more menacing in Michael Winner’s 70s gem as the spiffy Charles Chazin.

And while I resist even the notion of redoing Ira Levin/William Castle and Roman Polanski’s masterpiece Rosemary’s Baby if, and I’m only saying if… I could envision anyone else playing along side Ruth Gordon as the quirky and roguish Roman Castevet it could only be Burgess Meredith who could pull that off! 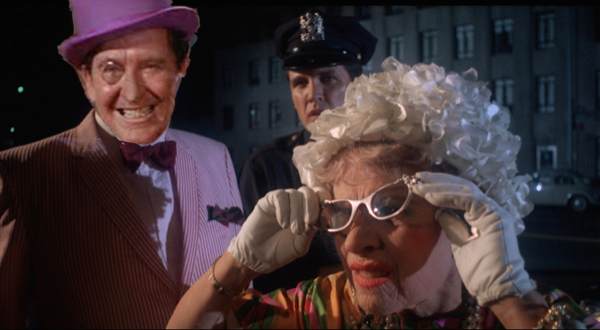 Also being a HUGE fan of Peter Falk’s inimitable Columbo– I ask why why WHY?! was Burgess Meredith never cast as a sympathetic murderer for that relentless and lovable detective in the rumpled rain coat to pursue! Could you imagine the chemistry between these two marvelous actors!

Burgess Meredith all of 5′ 5″ tall was born in Cleveland Ohio in 1907. His father was a doctor, his mother a Methodist revivalist. We lost him in 1997 at the age of 89. That’s when he took his “dirt nap…” the line and that memorable scene from Grumpier Old Men 1993 that still makes me burst out laughing from the outlandish joy of it all!… because as Grandpa Gustafson (Meredith) tells John Gustafson (Jack Lemmon) about how he’s managed to live so long eating bacon, smoking and drinking his dinner–what’s the point…? “I just like that story!”

Burgess Meredith said himself, that he wasn’t born to be a leading man, yet somehow he always managed to create a magnetic draw toward any performance of his. As if where ever his presence in the story was, it had the same effect as looking in a side view mirror of the car “Objects are closer than they appear”–What I mean by that is how I relate his contribution becoming larger than the part might have been, had it been a different actor. Like the illusion of the mirrored reflection , he always grew larger in significance within the story–because his charisma can’t help but consume the space.

He took over the landscape and planted himself there like a little metaphysical essence, animating the narrative to a higher level of reality.

Meredith started out working with the wonderful Eva Le Gallienne joining her stage company in New York City in 1933. His first film role was that of Mio Romagna in playwright Maxwell Anderson’s Winterset 1936 where Meredith plays the son of an immigrant wrongfully executed for a crime he did not commit. He also joined the ranks of those in Hollywood who were named as “unfriendly witnesses’ by the House Un-American Activities Committee finding no work, being blacklisted in the 1950s.

During the 1960s Meredith found his way back in various television roles that gave us all a chance to see and hear his incredible spectrum of performances. One of my personal favorites, dramatically potent and vigorously absorbing was his portrayal of Duncan Kleist in  Naked City television series episode directed by Walter Grauman (Lady in A Cage 1964)  Hold For Gloria Christmas

The groundbreaking crime and human interest series NAKED CITY– cast Meredith as a 60s beat poet & derelict Dunan Kleist who is literally dying to leave the legacy of his words to a kindred spirit.

A powerful performance told through flashback sequences that recollect his murder as he storms through the gritty streets and alley ways of New York City  a volatile alcoholic Greenwich Village poet trying to get back his precious manuscript of poems that were stolen as he bartered them away bit by bit for booze -he has bequeathed his work to the anonymous Gloria Christmas. The chemistry between Burgess Meredith and Eileen Heckart who plays his estranged wife is magnificent exuding years of anguish and disappointment. Heckart is another character actor who deserves a spotlight.

Another memorable role for me, is his spirited performance as Charles Chazin alias The Devil in one of my all time favorite horror classics The Sentinel. “Friendships often blossom into bliss.” – Charles Chazin. Ooh that line still gives me chills…

Many people will probably love him for his iconic character study of a crusty cantankerous washed up boxing trainer named Mickey in the Rocky series of films. Or perhaps, for his colorful cackling or should I say quacking villain in the television series Batman -his iconic malefactor — The Penguin!

IMDb fact-His character, the Penguin, was so popular as a villain on the television series Batman (1966), the producers always had a Penguin script ready in case Meredith wanted to appear as a guest star.

Burgess Meredith will always remain one of the greatest, most versatile & prolific actors, character in fact… beloved and eternal… 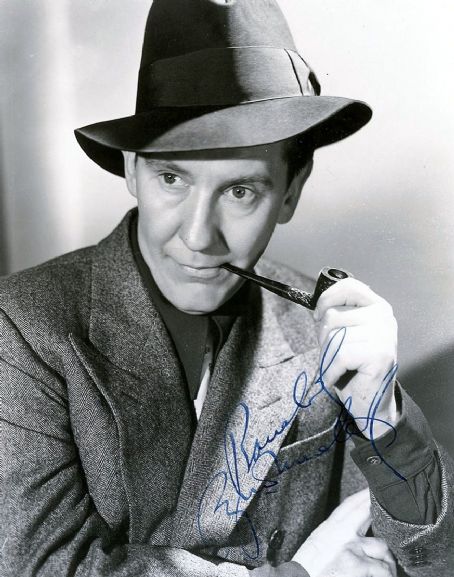 “Like the seasons of the year, life changes frequently and drastically. You enjoy it or endure it as it comes and goes, as it ebbs and flows.”- Burgess Meredith

“I’ll just take amusement at being a paradox.”- Burgess Meredith

[on his childhood] “All my life, to this day, the memory of my childhood remains grim and incoherent. If I close my eyes and think back, I see little except violence and fear. In those early years, I somehow came to understand I would have to draw from within myself whatever emotional resources I needed to go wherever I was headed. As a result, for years, I became a boy who lived almost totally within himself.”- Burgess Meredith