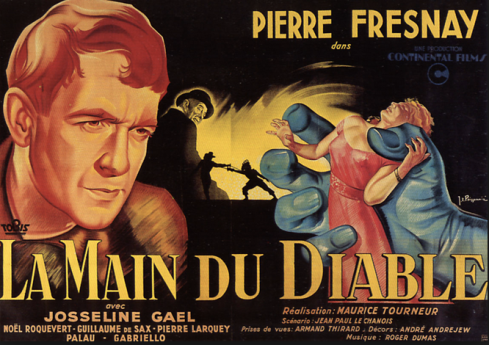 Directed by the silent film era auteur Maurice Tourneur, (father of Jacques Tourneur Curse of the Demon 1957, Cat People 1942, I Walked With a Zombie 1943, Out of the Past 1947 ) this fantasy- horror film creates a tumultuous Mephistophelean voyage of surreal and striking imagery.  This film has fast become one of my favorite fantasy/horror films…. 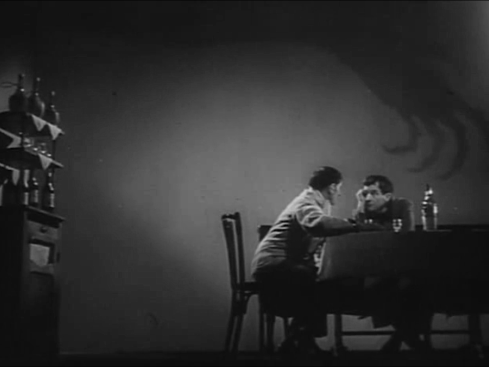 Carnival of Sinners or La Main Du Diable (The Devil’s Hand) is a brilliant and hilariously dark morality play about being careful what you wish for and what is the meaning of life and the pursuit of physical pleasure and earthly desires, if you must lose your eternal soul in the end.

With an incredible score by Roger Dumas, that lends a magical sound track to the story!

Based on Gérard de Nerval’s novel, the film creates a hallucinatory world of monochromatic imagery, with noir like edges & shadows, Gothic & theatrically macabre masks and a gruesome narrative about a disembodied charmed left hand. Palau’s amiable little grinning devil is perhaps one of my favorite portrayals of Old Nick as he reveals himself to others as a mild mannered civil servant in a bowler hat, when he is actually on a duplicitous mission to abscond with the soul’s of desperate men. 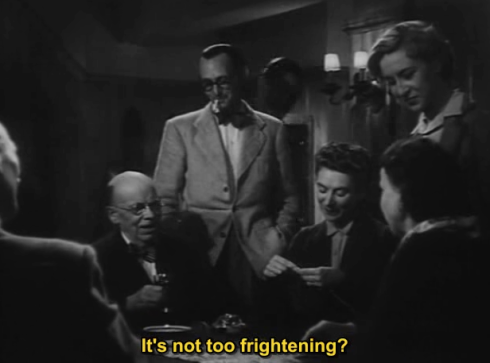 It opens with a small village tavern filled with people who have been detained by an avalanche. These characters are comical and colorful as they all want to eat, and are suspicious of Roland, who we haven’t been introduced to yet. As they wait to be fed, a strange man dressed in black carrying a wrapped package under his left arm, his immovable hand gloved in stiff black leather storms into the tavern with a gust of secrets and urgency at this back. They immediately have mistrust of this man, as he is not amiable and does not wish to mix with them at all. He acts as if he is being pursued by the devil himself.

Well maybe he is… hhm. He is called to the phone by someone asking for him by name. Once at the phone, the lights go out, and when they come back on and the chaos settles, the package is missing. He panics of course. 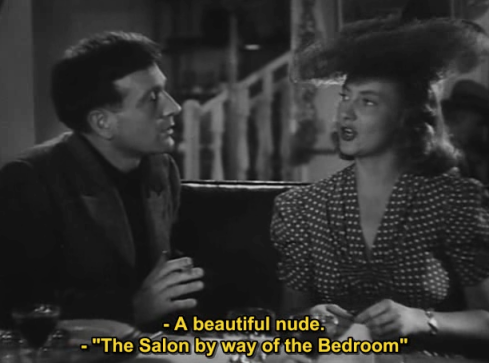 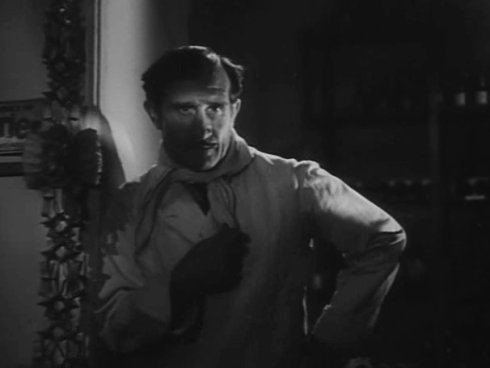 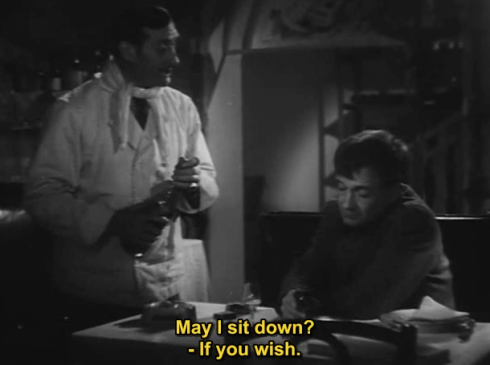 As it is a tradition at this tavern to be told unbelievable stories by Monsieur Notary. They plead with Roland Brissot to tell them what has brought him here. And so he begins to relate an incredible story…

Pierre Fresnay  (The Man Who Knew Too Much 1934, Le Corbeau -The Raven 1943) is french artist Roland Brissot, who can’t get the girl or sell a painting until one night after Irène (Josseline Gaël) storms out of the little cafe frustrated with him for not being a success and a bore,  Mélisse the cook (Noël Roquevert ) brings over a bottle of wine and offers to help the down and out painter. He tells Roland that he possesses a Talisman that he’d like to sell him for merely one sous. That it would bring him great riches, love and success!

When Roland follows him up to his room, he shows him a small wooden box, inside the curious box is an animated severed left hand. Mélisse explains to Roland that he purchased the Talisman a while ago, but he fears going to hell, and wants to save his eternal soul, so he must pass this gift onto another man who is willing to buy it full knowing the contract. Desiring to make Irène his own, and stop doing portraits of dogs. Roland agrees and pays the sous to the cook. At that moment, Mélisse’s left hand is severed and mysteriously wedded to Rolands left forearm, and he is now the new owner of the Talisman. Of course all his wishes come true and Irène comes back in total awe of her man. He becomes a great renowned painter and has riches beyond his wildest dreams. But with all these cautionary fables there is a kink in the chain. A chain that I will get back to in a short while. 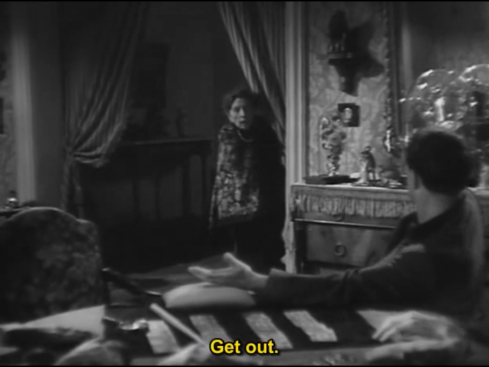 A peculiar little man (Le petit homme– who is wonderfully enacted by Palau (Children of Paradise 1945, The Devil in the Flesh 1947, Le Corbeau 1943) is actually the devil himself who has been offering this deal for quite a while now and since it has been a year to the day that Roland made the wager of his immortal soul for the Talisman, he has come to collect. 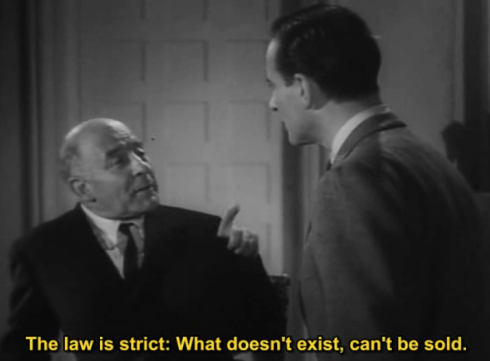 From the moment Roland obtains the Talisman, women flock to him, his dog runs away in fear, and Irène cannot resist him to the point that he no longer can stand her smothering love by the end.

The little man shadows his every move, playing little tricks on Roland so that he couldn’t possibly buy back his soul. He changes the time on the clock, he steals money so that Roland must scramble to put the fee together which doubles with every day that it’s come due. His life falls apart, his wife becomes less desirable to him and they become strangers, and all he wants is to be free of his left hand which is the harbinger of doom for him. 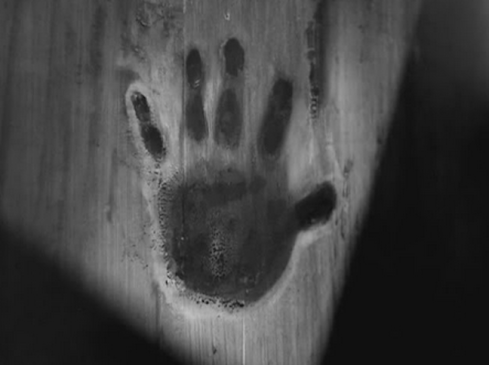 Will Roland Brissot find the next sinner to buy the Talisman from him… or will the Devil get his due?

As the he relates his story, it unfolds like a marvelous dark fairytale, lensed with visual splendor dipped in a wonderful folkloric narrative and marvelous characters… including the other souls who lost their left hands and formed a special chain in the links of fate. 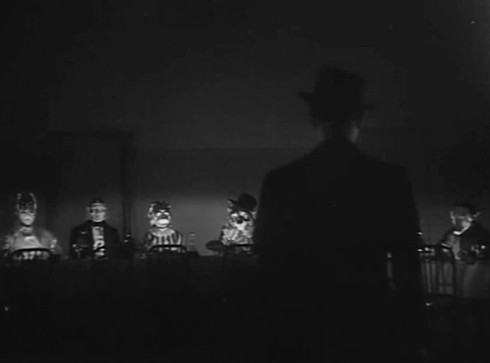 Roland’s journey is whimsical and harrowing, beautifully filmed by Arman Thirard  who photographed such masterpieces as Henri Georges Clouzot’s Diabolique 1955 and The Wages of Fear 1953 two of the best thrillers of all time!

Carnival of Sinners 1943 belongs with some of the great fixtures of ‘wagering your soul to the devil’, with William Dieterle’s The Devil and Daniel Webster 1941, and F. W. Murnau’s Faust 1926,

Roland has an enormous painting of Goya’s nightmarish diversion into hell hanging in his palatial mansion. It is the one of Colossus devouring his son. You would have to watch this film several times to catch all the wonderful details and devilish black humor! 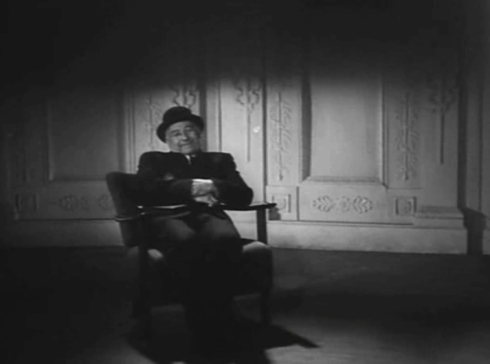