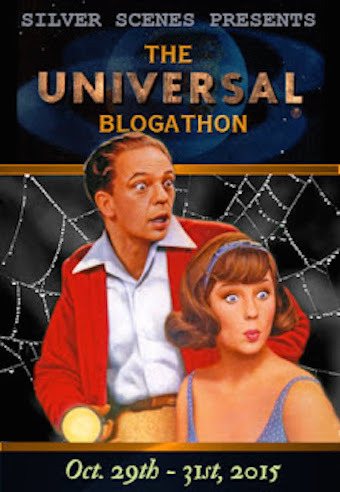 SILVER SCENES IS HOSTING THE UNIVERSAL BLOGATHON! SO I THOUGHT I’D BRING OUT THE UNIVERSAL TELEVISION PRODUCTION OF BORIS KARLOFF’S ANTHOLOGY… LET ME ASSURE YOU, IT’S A THRILLER!!! VISIT SILVER SCENES AND CHECK OUT ALL THE WONDERFUL CONTRIBUTIONS TO THIS HALLOWEEN CELEBRATION!

“I think the title leaves the stories wide open to be based on melodrama not violence or shock. They’ll be stories about people in ordinary surroundings and something happened to them. The whole thing boils down to taste. Anybody can show you a bucket of blood and say-‘This is a bucket of blood’, but not everyone can produce a skilful story”–Boris Karloff (1960) At the bottom of this feature you will find links to my older Thriller posts. Some of my favorite episodes- as well as 4 newly covered episodes in brief for the MeTV Summer of Classic TV Blogathon!-Masquerade,Parasite Mansion, Mr.George and The Purple Room!

From the show’s opening iconic musical score, you know something deliciously sinister is about to occur. The word THRILLER appears against a fractured white web like graphic title design quite a bit in the style of Saul Bass. The discordant piano and horn stabs of modern jazz already bring you into the inner sanctum of menacing story telling. As Boris would often say as a precursory welcome,”Let me assure you ladies and gentlemen, as sure as my name is Boris Karloff, this is a thriller.”

Thriller was filmed at the same network and sound stage as Alfred Hitchcock Presents. Producer Writer & Director Douglas Benton claims though not hearing it directly that Hitchcock resented Thriller, as he considered Hubbell Robinson encroaching on his territory.

Benton states, “Actually we weren’t doing the same thing he was, he was doing some very sophisticated ‘twist’ material. Hitchcock was doing the sort of thing that they started out to do on Thriller… We {Frye, Benton et al} came along and improved the ratings considerably and got a tremendous amount of press and Hitchcock didn’t like the competition. I don’t think he ever came out and said ‘get rid of ’em’ but he did allow them to enlarge his show from -a half hour to an hour, and that made it more difficult for us to stay on.” {source: Boris Karloff-More Than A Monster The Authorized Biography by Stephen Jacobs}

The series was developed by Executive Producer Hubbell Robinson program director and then executive vice president at CBS who was responsible for dramatic shows like Studio One & Playhouse 90 and produced Arsenic and Old Lace (tv movie ’69) with Lillian Gish & Helen Hayes. Boy oh boy would I like to get my hands on a copy of that!

In 1959 he left CBS to start his own production company, Hubbell Robinson Productions. Robinson had said “Our only formula is to have no formula at all,” endeavoring that each week’s episode would not be like the week before, bringing viewers one hour feature pictures that were “consciously and deliberately striving for excellence. {…}Each plot will be unique, unusual.” –Robinson {source:Boris Karloff-More Than A Monster The Authorized Biography by Stephen Jacobs}

Also on board were producers William Frye, Fletcher Markle & Maxwell Shane (The Mummy’s Hand ’40, Fear in the Night ’47) who added their vision of a superior mystery & horror anthology for MCA’s Revue Studios which would conform to the trend of anthology series’ featuring a host to introduce each week’s story.

The format had somewhat ambivalent themes, leaving the show’s narrative straddling both genres of crime melodrama and tales of the macabre. But… either of these atmospheres created by some of the best writers, directors and players delivered a highly intoxicating blend of both, remaining a powerful anthology with unique dramatic flare. Karloff loved the title for the show, “It’s an arresting title. And it does not tie you to one type of show. You can have suspense and excitement, without getting into violence {…} There will be none of the horror cliches on this programme {…} we will deal with normal people involved in unusual situations.”

Boris Karloff was very critical of horror for the sake of horror, during Thriller’s run,“We’re in an era of insensate violence. Today it’s shock, so-called horror and revulsion. I think the idea is to excite and terrify rather than entertain. The story is muck for the sake of muck. The over emphasis of violence on screen and tv has reached the point of being utterly absurd… That’s one thing you won’t find on Thriller-violence for the sake of violence, shock for the sake of shock.”{source:Boris Karloff-More Than A Monster The Authorized Biography by Stephen Jacobs}

Not only was there unmistakable atmosphere to each of Thriller’s episodes, the stories themselves were lensed in a unique way that was very ahead of it’s time. The actors brought a serious attitude to their characters and the plot development, and didn’t treat them as merely short pulp stories as fodder for the tv masses. This was an intelligent show, and the presence of Boris Karloff added a charming and cerebral primacy to the show’s narration. It was like being tucked in by your remarkable grandfather who loved to tell a good spooky tale to you right before bedtime. I’ve said this plenty, I wish Boris Karloff had been my grandfather. Everyone who has ever worked with Karloff had nothing but glowing praise for the great and gentle man. He exuded a quiet grace and was the consummate professional taking every part seriously and extremely generous with his time even as he suffered from his physical limitations. Karloff had been getting on in years and his grand stature was riddled with arthritis causing his legs to bow.

Actress Audrey Dalton said this, “Just the perfect gentleman. A terribly British, wonderful wonderful man.” Actor Ed Nelson who was dying to work with Karloff said, “He was a very gentle man” Douglas Benton had said, “Boris Karloff-God, what a lovely man.”

While filming The Prediction the scene at the end when he must lie down in the pool of rainy water and die, Karloff asked director John Brahm “Is this the best way for the camera?” who said, “Yes, it is but good lord you don’t have to lie there and have gutter water coursing up your britches like that!”  Karloff replied, “Oh yes I do! This is my work. I insist.” {source: Boris Karloff-More Than A Monster The Authorized Biography by Stephen Jacobs}

Every installment of the show offered us a chance to see Karloff as he enters the Thriller stage like a sage Fabulist delivering us the evening’s program with a refined articulation of philosophy and captivating story telling encapsulated in a compelling little prologue, often infused with it’s own brand of dark humor.