So the whole idea is to feel good right? Well I think  a lot of us would agree that any Rankin/Bass production is going to put a smile on your face… I couldn’t resist revisiting the children’s & adult animated feature that embraces Boris Karloff as an animagic puppet and a lot of campy inside cheeky humor, that’s not just for the kiddies, as the New York Times review from 1967 says it’s for ‘The monsters in all of us!”

“When I was nine, I played the demon king in “Cinderella” and it launched me on a long and happy life of being a monster.”- Boris Karloff 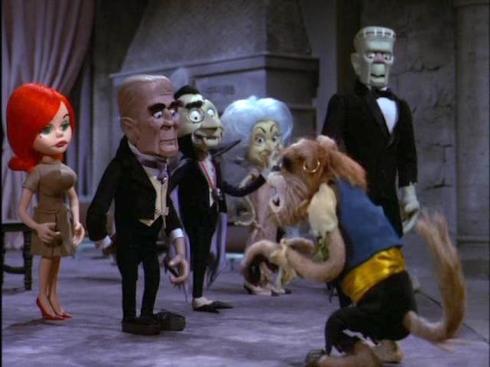 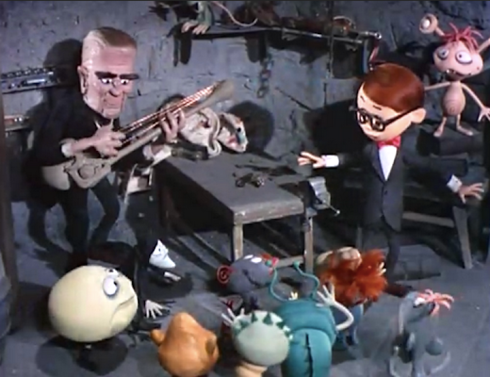 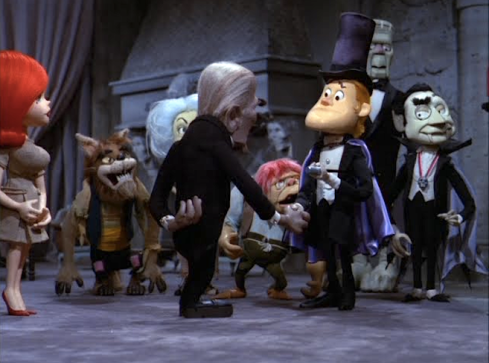 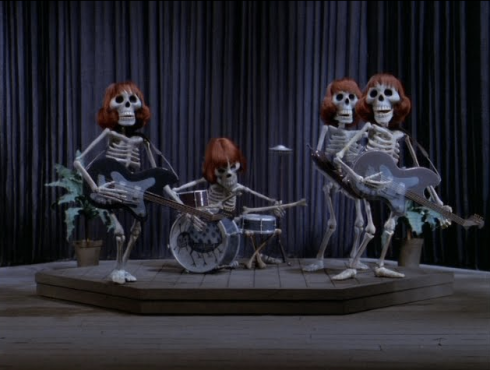 Gale Garnett is the voice of the Baron’s lovely assistant, the fiery red-headed temptress Francesca, Phyllis Diller is not called the Bride, she is referred to as The Monster’s Mate! 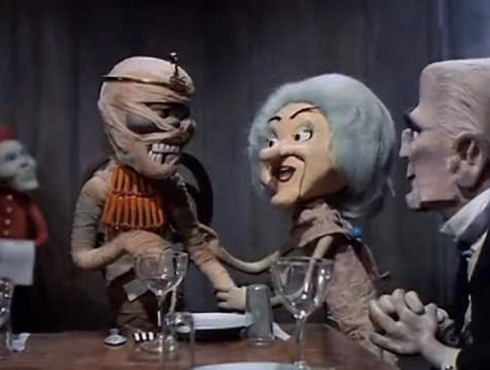 Music by Maury Laws, with cinematography by Tadahito Mochinaga and animation/puppet department by Jack Davis, an illustrator for EC comics in the 1950s, a fellow contributor to Mad Magazine and During the 1970s, he did concept art and storyboards for television commercials (‘Lectric Shave, Utica Club, Cask Mt. Wine, Unispin, Gillette, Sominex, Dodge Boys) animated by the Phil Kimmelman and Associates animation house. He was also the poster artist for the brilliant “It’s A Mad, Mad, Mad, Mad World” (1964) 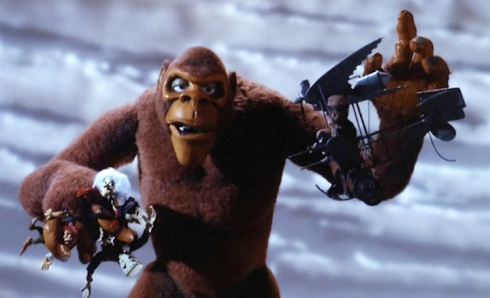 Mad Monster Party? (1967) is an offbeat  stop-motion animation feature made by Rankin/Bass Productions.  It’s a parody of classic monster movies more aimed at adults than children though it was badly marketed to the wrong audience, the weekend matinee for kids. It blends the art of slapstick with the nostalgia of Universal & RKO monster greats. Harvey Kurtzman, who wrote the script, was a co-creator of Mad Magazine. The characters were designed by Jack Davis, one of the illustrators of Mad Magazine. It explains the element of racy, campy, quirky and delightfully droll humor, and why it has remained a cult classic, since the days of Saturday afternoon programs like Creature Features! Oh those were the days… 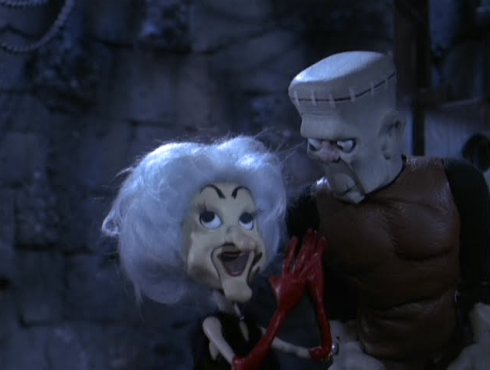 “Certainly, I was typed. But what is typing? It is a trademark, a means by which the public recognizes you. Actors work all their lives to achieve that. I got mine with just one picture. It was a blessing.”-Boris Karloff

The film is a feature length ‘animagic’ gem but because they could not get the licensing to homage the actual classy trademarked monsters, they resorted to a parody of the characters using similar names instead. The Bride of Frankenstein is called “the Monster’s Mate” and is brought to life by the superb impersonation of the batty and biting Phyllis Diller rather than the surreal & sensual Elsa Lanchester. The Creature from the Black Lagoon is called “Creature.” And King Kong is referred to as “IT.”

Boris Karloff himself did the voice for Baron Boris von Frankenstein. Karloff recorded his dialogue in England at the sound stage, which was a much more comfortable job for Boris Karloff made easier on his body, by that time he was suffering from debilitating arthritis and trouble with his lungs.

Composer Maury Laws said of the great Karloff, “Boris Karloff was the perfect gentleman.” Producer Arthur Rankin Jr. said “He was suffering from an illness at the time, but he gave us a great performance in Mad Monster Party? (1967) and The Daydreamer (1966) as well!”

And let us not forget that Boris Karloff played the voice of The Narrator & Grinch in director Chuck Jone’s adaptation of the Dr. Seuss story How The Grinch Stole Christmas tv movie (1966)

The party guests also include The Wolf Man, Quasimodo, various zombies that appear to pay homage to the dreaded flying monkeys from The Wizard of Oz, and a deranged chef named Mafia Machiavelli. 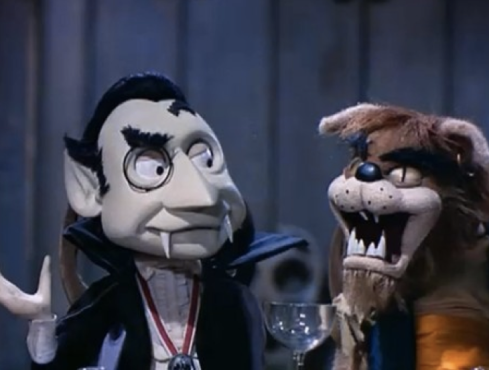 Allen Swift does a great take on Peter Lorre who pines after Francesca… Yetch- “It’s me, Your Don Juan” Francesca, “I Don Juan to look at you!”, and if it’s not my imagination, I could swear that what remains to be seen of the Invisible Man looks and sounds like Sydney Greenstreet’s fez wearing character Signor Ferrari in Casablanca (1942) a coincidence… I think not! And I could swear that monocle wearing version of Dracula bears a striking resemblance to pioneering live show of the ’50s Your Show of Shows, brilliant comedian Sid Caesar. 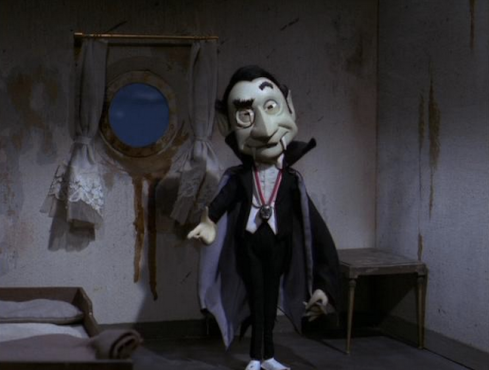 In the movie, Baron Frankenstein who is equip with a laboratory that would make Kenneth Strickfaden proud, invites his noodle headed, perpetual throat spraying annoyingly allergic nephew Felix Flanken who dreams of being a pharmacist, to take his place as the head of the Worldwide Organization of Monsters to be run at his tropic hide away ‘The Isle of Evil.’ 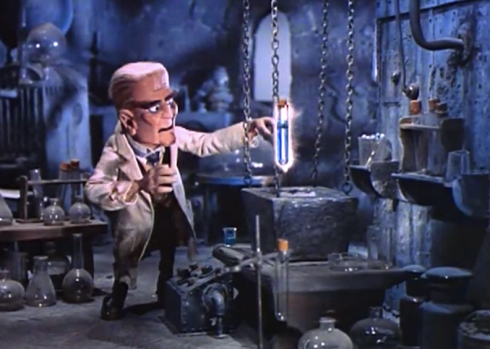 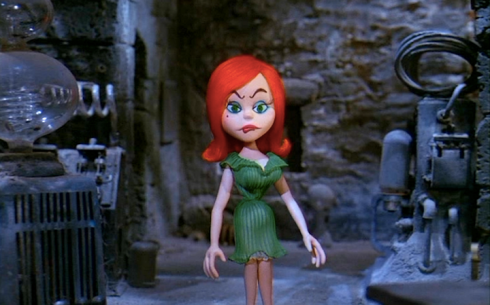 There his uncle will be bestowing on Felix his last great creation, a secret formula capable of destroying all matter. When the Baron announces this to the organization of his new successor, the monstrous guests plot to get rid of the nerdy Felix so they can take over the organization and grab Dr. Frankenstein’s secret formula. The Baron’s assistant, Francesca, falls in love with Felix, and is kidnapped by the monsters. Boris gets Francesca away from those greedy ghouls, and Felix and Francesca are able to leave the island, rowing away in their tiny row boat, with perhaps a delicious twist ending in store for you!

Although the film came out in 1967, the distributor Embassy Pictures relegated it to kiddie matinees, instead of reaching older audiences that would’ve appreciated the human and references. The film got virtually no attention until 1969’s (read here )☞ New York Times review.

Howard Thompson writes, “In this peppery and contagiously droll little color package, a collection of animated puppets scamper across some clever miniature sets, exchanging sass and barbs and occasionally warbling some sprightly tunes.”

Rankin/Bass Productions (who brought us those memorable claymation Christmas feel-goods) in affiliation with Avco Embassy found the intended audience for the film in the 1970s and early 1980s by showing it on the small screen. They also made a 1972 prequel called Mad Mad Mad Monsters.

The film also includes songs the opening song rendered by jazz great Ethel Ennis with- “Mad Monster Party”, “One Step Ahead” (sung by Boris Karloff) Our Time to Shine & Never Was a Love Like Ours (sung by Gale Garnett) music and lyrics by Maury Laws and Jules Bass, also lets not forget, “You’re Different” sung by Phyllis Diller

“My dear old monster. I owe everything to him. He’s my best friend.”- Boris Karloff 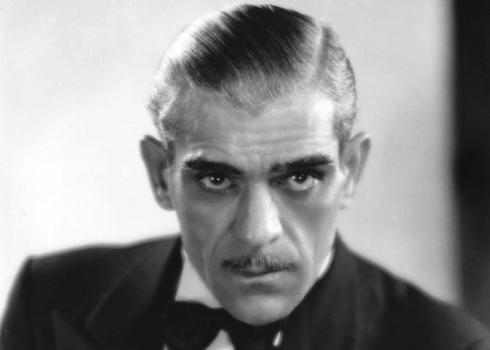 It’s been a Mad Mad Mad Mad Party here at The Last Drive In… Hope you had a Groovin’ Ghoulish time! –Your EverLovin MonsterGirl!