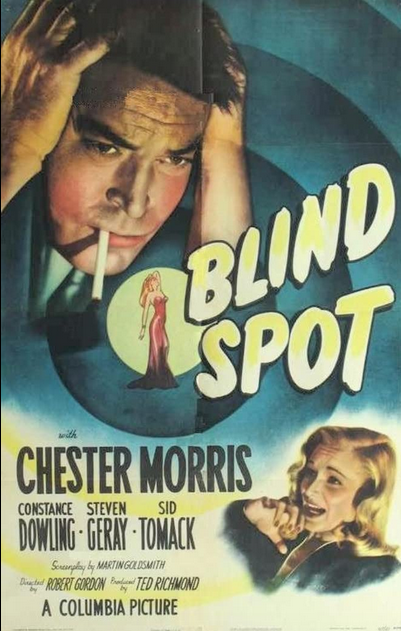 Directed by Robert Gordon, Blind Spot (1947) stars Chester Morris as Jeffrey Andrews, a wrought out mystery writer who is living in a drunken stupor, accused of killing his publisher when he turns up dead. Constance Dowling is Evelyn Green, the publisher’s secretary who helps Jeff find the real killer. 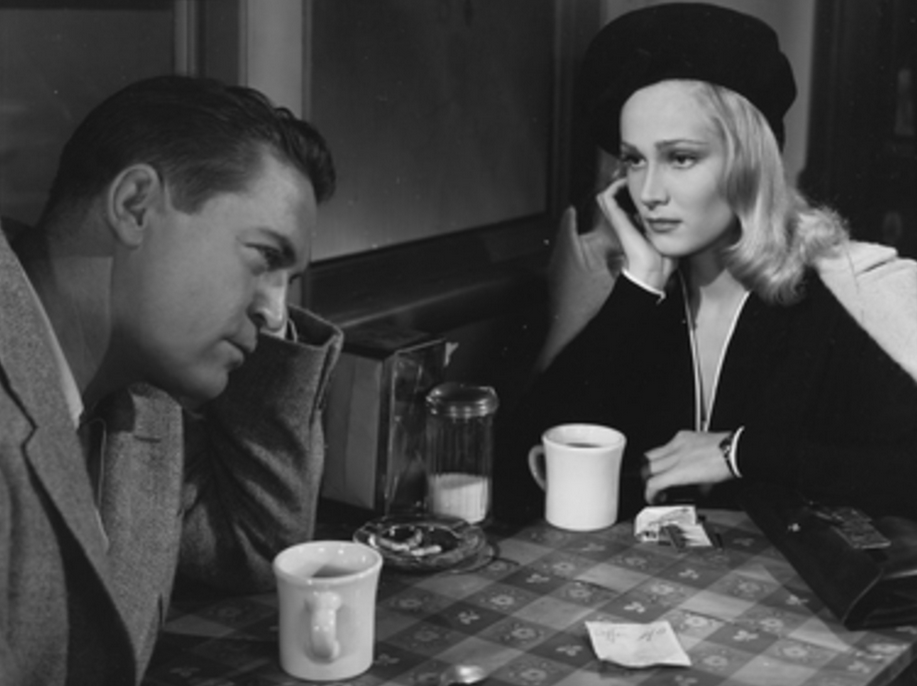 “Hypnotized! Reincarnated as a monster from hell!” In 1952 the world celebrated the famous Bridey Murphy regression case. It began when one Morey Bernstein hypnotized a Colorado housewife named Ruth Simmons. Under a trance, emerged the personality of Bridey Murphy an 18th Century Irish woman.

In 1956 Bernstein published his book The Search For Bridey Murphy. Eventually the story made it onto the screen by Paramount Pictures, starring Teresa Wright and Louis Hayward, a film which is on my short list of things to watch.

And if you have a guilty pleasure for musicals as I do, you’ll see the story retold in Vincente Minneli’s On A Clear Day You Can See Forever 1971 starring musical diva Barbara Streisand, Yves Montand and Jack Nicholson. With some of the BEST music by Burton Lane and lyrics by Alan Jay Lerner.

Now in 1956 when A.I.P was churning out goodies like It Conquered The World 1956  for Roger Corman, the idea of past life regression became of some interest to producer Alex Gordon.

The She Creature incorporated the concept of a lovely girl harboring a past soul or souls, but due to the fact that A.I.P. wanted monsters in their pictures, they used the best of both worlds and mixed an unconventional idea that was all the rage at that time, and threw in an ancient busty crusty beastie that rose from the sea, whenever the girl was in a trance. So you have it, a girl from the 20th century inhabited by a female creature from the primordial edges of time’s beginning. Schlocky fun from Samuel Z. Arkoff, Alex Gordon and one of my favorite directors who can take a b-movie sci-fi/horror picture and bring a bit of grimy noir sensibility to it the great Edward L. Cahn.

Jerry Zigmond’s contribution was coming up with the title THE SHE CREATURE and the screenplay was written by Lou Rusoff. The film stars Chester Morris as Dr Carlo Lombardi, Marla English as his subject Andrea, good ole Tom Conway as Timothy Chappel, Cathy Downes as Dorothy Chappel, Ron Randell as Lt. Ed James, Lance Fuller as Dr. Ted Erickson Frieda Inescort as Mrs Chappel and of course Paul Blaisdell as Beulah! Chester Morris (Alibi 1929, The Big House 1930, Five Came Back 1939) plays the smarmy Dr. Carlo Lombardi, carnival hypnotist and prognosticator extraordinaire. Morris brings smarmy to a whole new level here, that it even makes Jack Cassidy‘s villains’ seem Christ like. Lombardi travels around rich circles impressing the affluent patrons, with his ability to regress his female hostage, oops I mean patient back in time, probing old memories of their past lives, thereby proving that reincarnation is real.

Another nifty trick is the claim that he can summon forth the incorporeal spirit or soul from the past and manifest it into a physical form. It starts out on the desolate beach at night where the mustachioed mad hypnotist Lombardi is standing in silhouette , then walking along the shore, dressed in black like a villain from a silent movie, about to tie a maiden to the train tracks. He’s staring out at the sea, a distant shape is forming in and out of the breaking tides.

“Now on This very night I have called into the unknown depths of time itself. She is here. And with her coming, the world will never be as it was. Neither man nor animal will be the same. This, I, Dr. Carlo Lombardi have brought into being!”

Suddenly the camera focuses on a monstrous invisible foot print in the sand. The moment is broken when King the loyal dog of Dorothy Chappel, starts barking and breaks Lombardi’s concentration. Dorothy’s father Timothy Chappel a promoter, is hosting a party this particular weekend at their fancy beach house. Invited to the party is Dorothy’s boyfriend Dr. Ted Erickson who is a notable expert on the subject of psychic research. He’s not comfortable mingling with the idle rich, he’s basically just a ‘farm boy’ and just doesn’t fit in with Dorothy’s father’s crowd. Mrs.Chappel believes in the powers of the supernatural She tries to convince her husband that Lomardi’s prediction that something terrible is going to happen along this part of the coast tonight, they’ll be ‘a visitation from the occult world’ and tells him seriously that he must meet him. Tim Chappel laughs at his wife, and remarks, that “Some women keeps pets, or grow roses for kicks, my wife supports quack occultists.”

Mrs.Chappel tells her husband that he puts this girl in a deep trance and sends her back over 300 years. When she was a girl in England. ” I tell you it’s uncanny!” Mrs.Chappel is vehement!