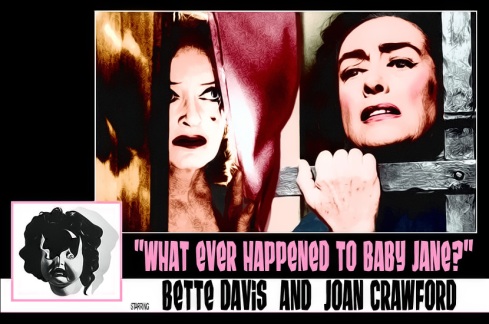 At the start of Baby Jane the screen is pitch black, we can hear a child sobbing. The 1st prologue begins 1917. The screen still blacked out, we hear a man’s voice say “Don’t you want to see it again,little girl?” This is setting up an eerily invasive narrative as we do not know yet if it is something sinister making the child cry. The male voice adds “It shouldn’t frighten you” then a quick jump cut and we are able to see a Jack in the Box toy popping up, causing terror in the child. Now we actually see the little girl staring at the toy with tear soaked cheeks as she gasps for air.The toy has disturbed her with it’s quick movements and odd expression. There is a shot of its peculiar face which has an uncanny shedding of tears down it’s tin cheeks. The use of children’s toys in horror films has often been used as a mechanism to evoked fear or otherworldly dread in us, as if they might embody some incarnate evil. Here is a great link to Horror Film History’s website.

Next we hear vaudeville music and see Baby Jane Hudson’s name up in lights on the marquee of the theater. The theater is sold out, Jane is tap dancing in spot light, to Stephen Foster’s “Swanee River” in front of a packed house.Her father is waiting off stage with Blanche and their mother. He is rallying her with encouragement from the wings while the wife looks solemnly at him, simultaneously young Blanche is looking at him with resentment. Both figures are feeling left out. Young Blanche is played by Julie Allred who was marvelous as little Priscilla in the Boris Karloff Thriller episode Mr.George.

Mr Ray Hudson played by Dave Willock comes out to a cheering audience holding a banjo, and tells the crowd okay folks one final request. A little freckle faced boy stands up and requests “I’ve Written A Letter To Daddy” And so the lights dim and father sits at the piano to accompany his little girl on this very popular tune.The voice has such a warbling vibrato that it makes little Jane sound bizarre and incongruous (no offense to the singer Debbie Burton) as a child’s voice. She sings with such a sugary exaggeration. Jane’s got the affected style of performer down to all the over reaching body gestures indicative of a ham. Holding the letter to her heart, kissing it, looking upward toward the ceiling sky. “And wish you were here with us to love” as she sings this line she wraps her arms around herself clinging as if the embrace a lover but meant for her father.

Mr Hudson, Jane’s daddy comes out from behind the piano and joins his daughter in a dance,which make them appear as if a romantic couple. From the side of the stage we see the expressions on Mrs Hudson’s face and young Blanch , there is obviously no room in the father and Jane’s relationship for either sister Blanche or the mother.

After the performance a little boy runs on stage and hands Jane a replica Baby Jane doll of her very own. Jane’s daddy is a showman all the way, “folk’s have you ever seen such a lovely doll” (he in fact has objectified his daughter, as well as exploited her for profit “a genuine Baby Jane” doll. “And kids remember you can tell your moms that each and every one of these genuine beautiful great big dolls is an exact replica of your own Baby Jane Hudson.” END_OF_DOCUMENT_TOKEN_TO_BE_REPLACED