Hosted by Movies Silently and The Last Drive In

I’m going to be talking about the mesmerizing Hedy Lamarr. She fascinates me & She’s not just a pretty face!

What is an Anti Damsel …? Well that is open to interpretation

Whether it’s a Queen who reigns over an entire lost civilization, a vamp, a dame or a femme fatale in the shadows woven by the spirit of Film Noir or…maybe she’s perceived as crazy or maybe the very things that frame her as crazy are responsible for getting her there! Can she still not be powerful, enigmatic?

It’ll be exciting to see people letting go of an archetype and setting the empowered woman free!

Women… both ON and BEHIND the screen railing against a culture that condemns them for growing older, gathering years that wear on their face and body.

as Garbo said “Time leaves traces on our small faces and bodies. It’s not the same anymore, being able to pull it off.”

A society that judges their sexual awareness…  the hypocrisy of fear, a fear of them possessing a sexual freedom…. some who see them in the role of ‘good girl’ or ‘the good wife’ barefoot and pregnant, as weak and dependent on anyone but herself… balderdash!

She’s been the central figure in danger, the iconic woman in peril … the one who is not in control, trapped by a the narrow gaze of objectification… instead of inherently capable of the same self sufficiency, violence, aggression, strength or self preservation as men…. 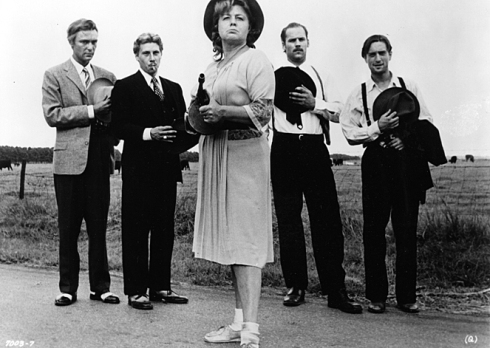 BY NO MEANS DO I WISH TO IMPLY THAT IN ORDER FOR A WOMAN TO BE EMPOWERED SHE MUST BE ARMED!!!!!!

The Anti-Damsel can be any classic (from the Silent Era -1970) character in a film or a look at the actress herself. She can be working behind the screen, directing, writing, editing, designing, involved in the creative process that goes into a project and not just the illusion, the face the persona that is manifested on the other side of the screen.

The breadth of this theme can open up a world of possibilities and I’m really excited and so happy that the witty and prolific Fritzi of Movies Silently asked me to co-host this fantastic Blogathon!

God knows I’ve written about women-in-peril, it’s time to flip the coin and show some truly innovative, independent, visionary, magnetic and striking examples of the power of WOMEN… that’s the key word EMPOWERED….

Let’s scare off that woman in peril off for now!

Let’s drag out the ‘victimized woman’ and talk about the gals with guts, grit, gumption and genius!

From the silent era to 1970 is the window we’re giving everyone to gaze through. Check out the list of guidelines for the event just to make sure it’s the Blogathon for you!

And please stop by Movies Silently and laugh your ass off because no one turns a phrase or generates a gif quite like Fritzi! who has this to say-–“Now classic and silent films did sometimes rely on the damsel in distress trope (just as entertainment today does) but we’re here to talk about the women who kicked down stereotypes, took the reigns and generally got the job done.”

For clarification, this doesn’t mean that we only want action heroines. Oh no. We want bold, brave, smart women who made their mark in all walks of life.”- Fritzi of Movies Silently

And say… while you’re settin’ your mind to what you’d like to write about, grab a banner that inspires you… ! If you’ve got an idea drop either me or Fritzi a line-email me at Ephemera.jo@gmail.com or leave a comment …

What do you mean by empowered?
We’re leaving that up to our participants. What qualities do you admire about independent and capable women? Choose a character or real-life woman who fits these qualities and you’re good to go!

Any other rules?
In order to encourage variety, we are asking for no exact duplicates. This means that if someone claims, say, Katharine Hepburn, you are still free to cover her films or characters that she played.

I’m in! What do I do?
Tell one of us your topic, grab a banner and you’re good to go. Please let us know if you have a date preference. Otherwise, we will divide the posts equally between us and let our participants know which hostess they belong to. Then write your fabulous post, send us a link at or before the event and you’re good to go.

I want to join but I don’t have a topic yet.
No problem. If you need a recommendation, contact either one of us for suggestions. We will add you to the roster once you make your choice.

Participation Etiquette
When claiming your topic, please let us know the name and URL (web address) of your blog. Sometimes usernames and blog names do not match or social media accounts are linked to an old blog or one that covers a different topic. We can’t link to you if we don’t know where to find you.

Blogathons can be chaotic so we ask that our participants please send us links to their posts via comment, email or social media. We try our best but it’s very difficult to track down all the participants to see who has posted and who hasn’t if they don’t let us know. In short, don’t just post and wait for us to come to you. If you leave us word that you have posted (and include the URL) then you are making our lives 100% easier. Thanks!

Please only claim topics that you are sure you can cover. In a “no duplicates” event, it can be frustrating for fellow participants if a popular topic is snapped up and then cancelled at the last minute. Of course, life intervenes and everyone has had emergencies interfere with blogging commitments but please be considerate of fellow bloggers. If you find that you are unable to take part in the event, please let us know as soon as you can. This will give other bloggers a chance to write about the subject.

This is what happens when you create confusion for us hosts!

PS: I will be taking donations of chocolates, it is easier to be femme-powered when working with a bit of chocolate at the ready!

Movies Silently | Life, Liberty and the Pursuit of Milton Sills: How Miss Lulu Bett Struck a Blow for the New Woman

The Last Drive In | Hedy Lamar: From Ecstasy to Frequency- A Beautiful Life  & Special List-Enduring Empowerment: 111 Women who didn’t give a damn in Silent & Classic Film!-collaboration with Fritzi from Movie’s Silently!

Tales of the Easily Distracted | Charade (1963

Aperture Reviews | Kate Hepburn in The Lion in Winter

Serendipitous Anachronisms | Kim Hunter in Planet of the Apes (1968)

Old Hollywood Films | Lillian Gish in Night of The Hunter (1955)

Moon in Gemini | Vance Jeffords (Barbara Stanwyck) in The Furies

BNoirDetour | Edie Johnson (Linda Darnell) in No Way Out

In the Good Old Days of Classic Hollywood | Bette Davis

MovieFanFare | Olive Thomas in The Flapper

Defiant Success | Deborah Kerr in From Here to Eternity

Smitten Kitten Vintage | Mary Pickford, Clara Bow and Bette Davis as Margo in All About Eve 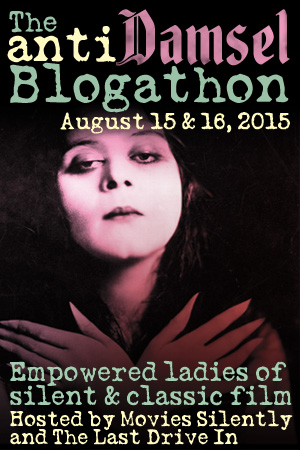 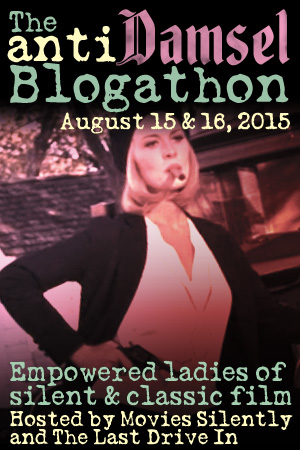 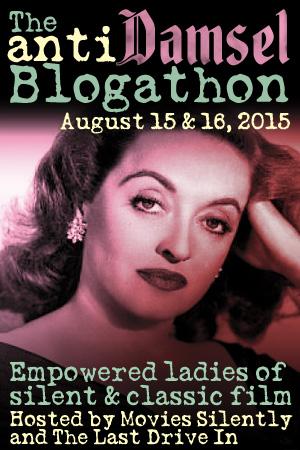 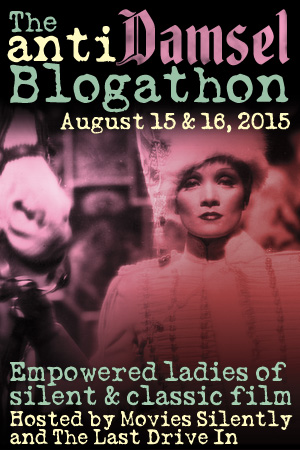 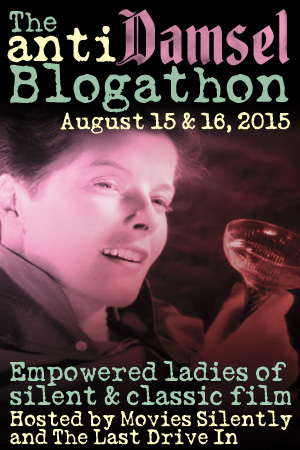 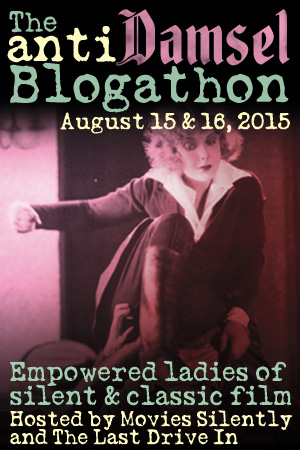 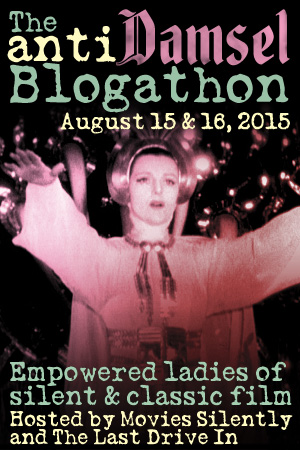 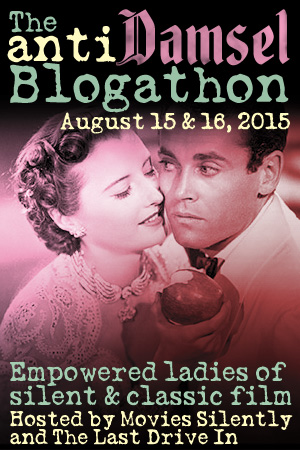