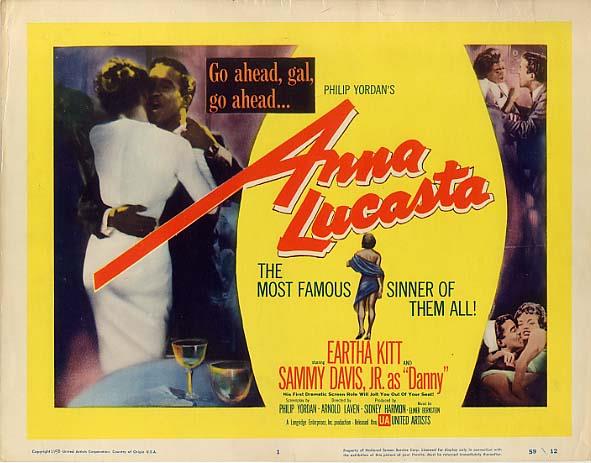 Though I appreciate Paulette Goddard’s work in the 1949 version, the re-filming of Anna Lucasta in 1958 again written and scripted by Phillip Yordan with an all black cast is powerful good. Arnold Laven’s direction brings to life a more visually potent assemblage of splendid characters. I go through little bursts of adoration and nostalgia, a while ago it was for Paul Williams… lately I’ve been loving Sammy Davis Jr. Both he and the sensuous depth of Eartha Kitt create an atmosphere of volatile romanticism.

The story is an engaging and moral tale about young Anna (Eartha Kitt) who is rejected by her sanctimonious father Joe played to the hilt by Rex Ingram (God’s Little Acre 1958, Desire in the Dust 1960) While the rest of the family wants Anna to come home, her self-righteous father can’t resist demonizing his daughter, with an underlying incestuous desire that he is battling. She takes the road of the fallen woman and becomes a good time gal who meets Danny (Sammy Davis Jr.) a cab driving sailor who is as smooth as silk and as fiery as molten lead. Here they are in a surreal sequence that showcases the versatile beauty and ease both performers possess- set against the stirring Elmer Bernstein modern jazz score!

Who can make the sunshine? Sammy Davis Jr can!… Cheers Your Everlovin’ Joey